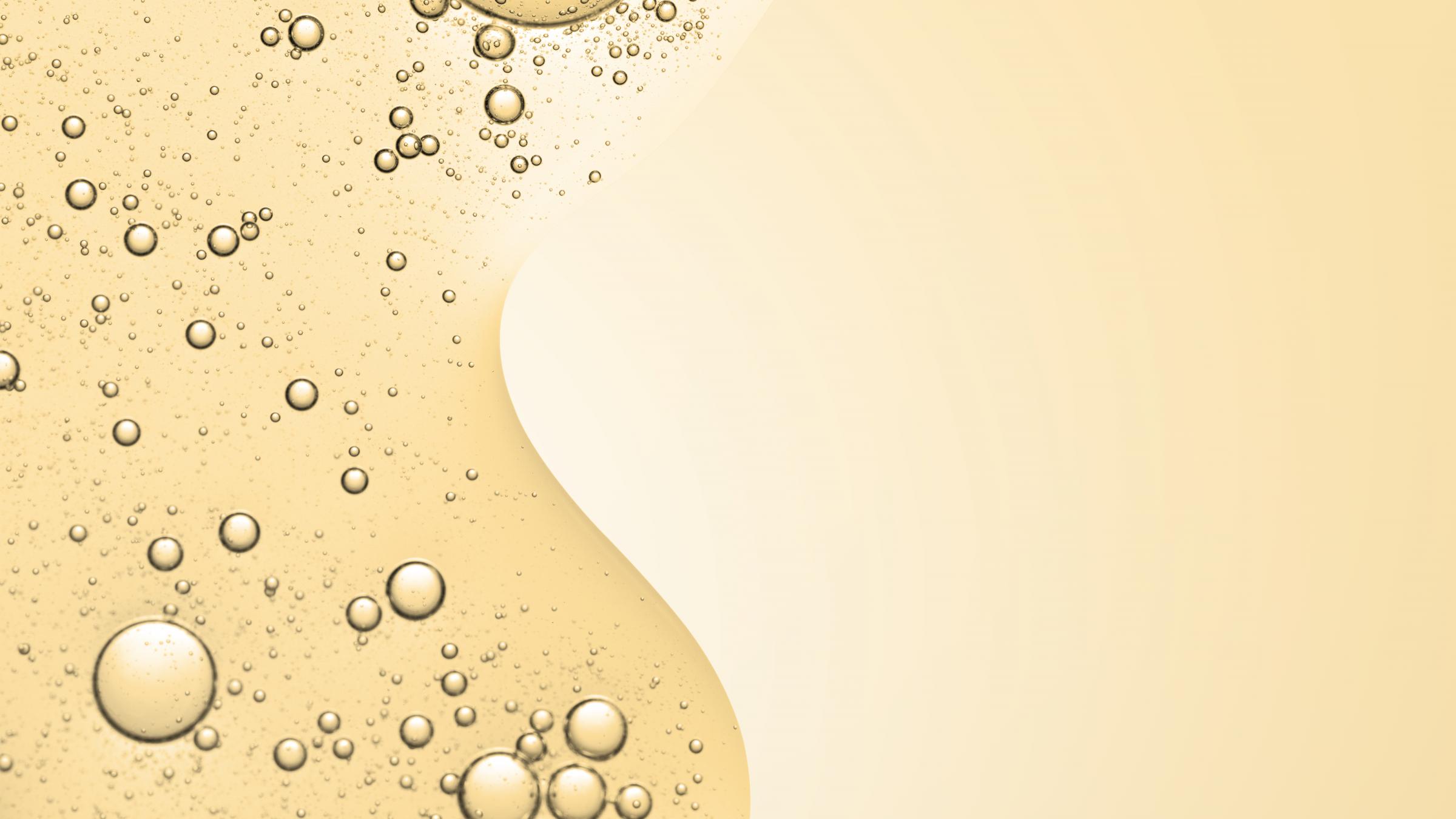 By obtaining the realistic database on edible oil consumption per capita that represent the whole country, the edible oil quantity required for the country’s population can be calculated. This data will help the related government institutions and its policy makers in regulating the edible oil sector within the country. For example, in terms of preventing oil shortage, factors like sufficiency status, self-sufficiency policy, edible oil price control, monitoring domestic supply and international trade flow etc., come into play. In addition, by acknowledging the consumer preferences of different oil types, the specific oil types that are dominating the market can be analyzed that will help calculate the local demand and market opportunities. Therefore, the main purpose of this study is to conduct a consumption survey in Myanmar to better understand consumption rate, the domestic market, and regional differences. The following are the objectives of this study:

Data collection was undertaken in November 2021 by a structured questionnaire which was developed and modified based on the previous edible oil consumption pilot study by Thi Thi Soe et al., (2021) for the survey. The local agricultural officers of Department of Agriculture from the selected townships were appointed as enumerators for data collection. The trainings and instructions for data collection were provided by the research team from the Department of Agricultural Economics of the Yezin Agricultural University (YAU).

As shown in Table 1, the sample respondents from the rural and urban areas of these townships were selected using simple random sampling. A total 3,945 respondents in this study representing various parts of the whole country are expected to be from diverse populations which are comprised of different income levels, occupation types, and rural/urban residence. The potential respondents were based on the fact that they are the main household members managing food at the households to collect data on edible oil consumption amount and food expense. The potential participants were self-selected with a voluntary way in as much as they choose to participate or not.  The enumerators visited the households, explained the purpose of the study, and solicited their voluntary participation. If the respondent agreed to be involved in the study, the interview was conducted using the structured questionnaire.

YAU research team collated the transmitted data and conducted data cleansing. Analysis of the data, the interpretation and the writing were then carried out. Descriptive analyses (group-level) were used to generate the sample characteristics. Several ethical issues were considered throughout the study such as the respondents’ voluntary participation, questions posed to be non-personal in nature, confidentiality to be achieved by assigning a code to protect the respondents’ identity and the data to be accumulated to a group level. 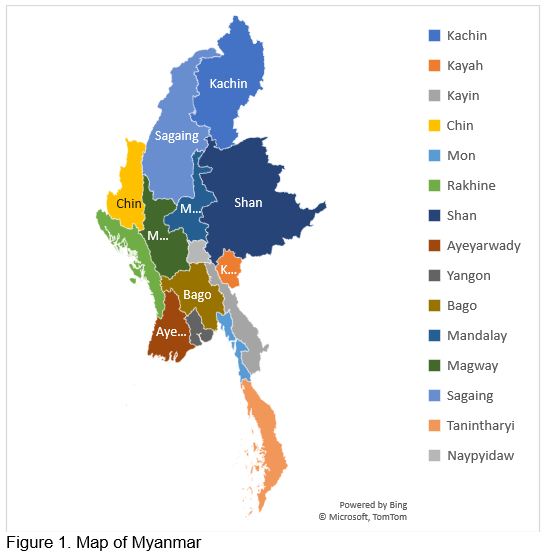 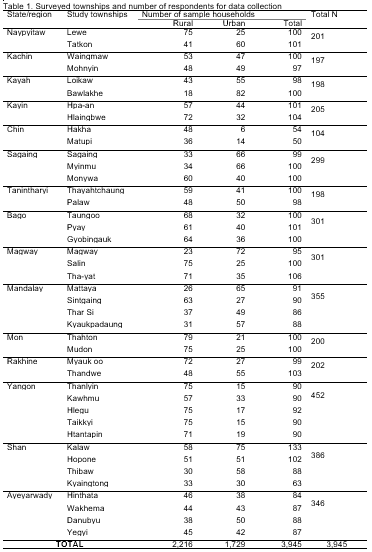 The average age of the respondents among the 3,945 studied population was 47 years with a standard deviation of 12.25. The household size ranged from 1 to 15 and the average was 4 persons among the respondent households (Table 3). Urban residents represented 56.17% of the study population while 43.83% were from rural areas. The female ratio among the respondents was found to be 89.56% as the survey was intended to interview the people who manage the food in their respective households (Table 3). This indicated that nearly 90% of the people responsible for food preparation and cooking at the household level were women in Myanmar. Among the 1,321 of the respondents who owns agricultural lands, the average farm sizes were 2.57 hectares and ranging from 0.04 to 32.37 hectares. 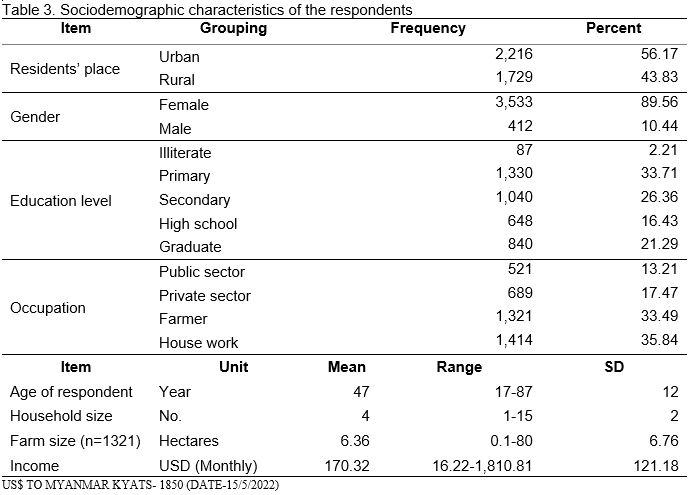 These regional differences in consumption rates are expected to be contributed by the physical and social factors. The physical factors such as climatic conditions, land-use, agro-ecological and geographical features, local edible oil supply and social factors such as socioeconomic conditions, ethnicity, and regional and cultural culinary habits may influence the difference in per capita edible oil consumption rates. In addition, Raphy Favre and Kyaw Myint (2009) stated that the price transparency, color, taste, smell processing, labelling, and quality control are the factors that may influence consumer choices of different oil types. 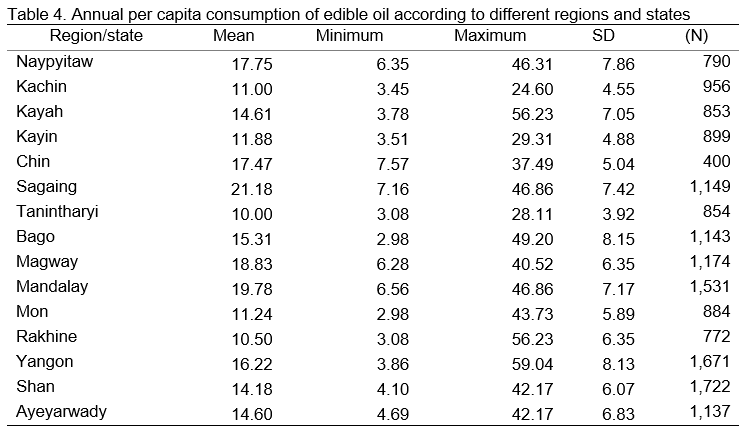 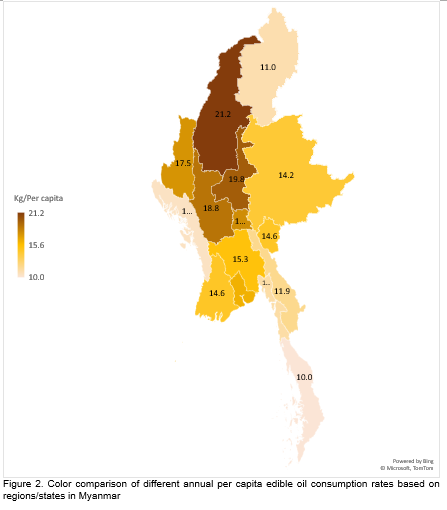 Peanut oil, sesame oil, palm oil, sunflower oil, vegetable oil, olive oil, soybean oil, mustard oil and mix oil are the top 9 edible oil types usually consumed in Myanmar. As shown in Figure 3, in the whole country, vegetable oil is the highest consumed oil type with 27% of the total respondents consuming at the time of survey. Peanut oil consumption is the second highest with 25% of the respondents. This is followed by mix oil and palm oil which are consumed by 15% and 12% of the total respondents. Sesame oil and sunflower oil are also consumed by 8% and 7% of the respondents, respectively. 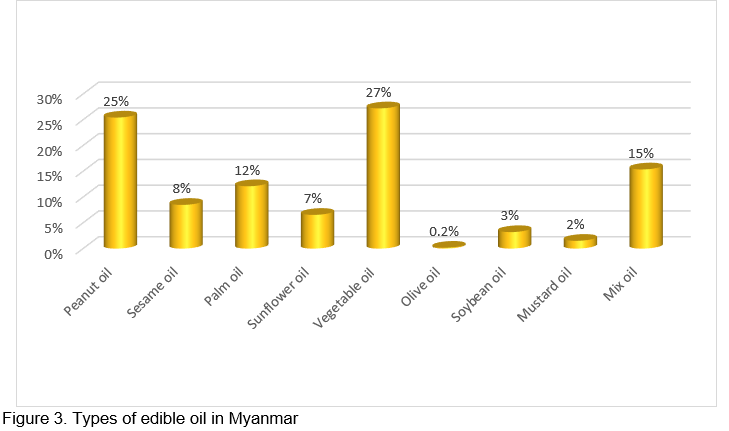 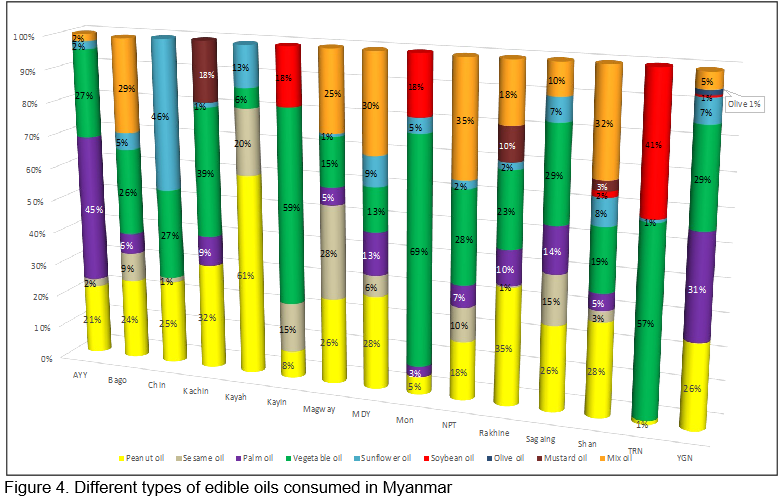 Several regional differences in edible oil consumption in terms of per capita consumption rates and different oil types have been reported in this study. These differences are sometimes attributed by the local availability, for example, the highest edible oil consumption rate per capita was found in Sagaing, Magway and Mandalay where these regions have the largest growing areas of oilseed crops, and the highest oilseed crops productions compared to other regions. On the other hand, the regional differences are sometimes independent of local availability. For example, no palm oil consumption was reported for Tanintharyi region in this study despite the highest palm oil cultivation is located within the region.

Learn more
END_OF_DOCUMENT_TOKEN_TO_BE_REPLACED
You are using an outdated browser
For a better experience using this site, please upgrade to a modern web browser.