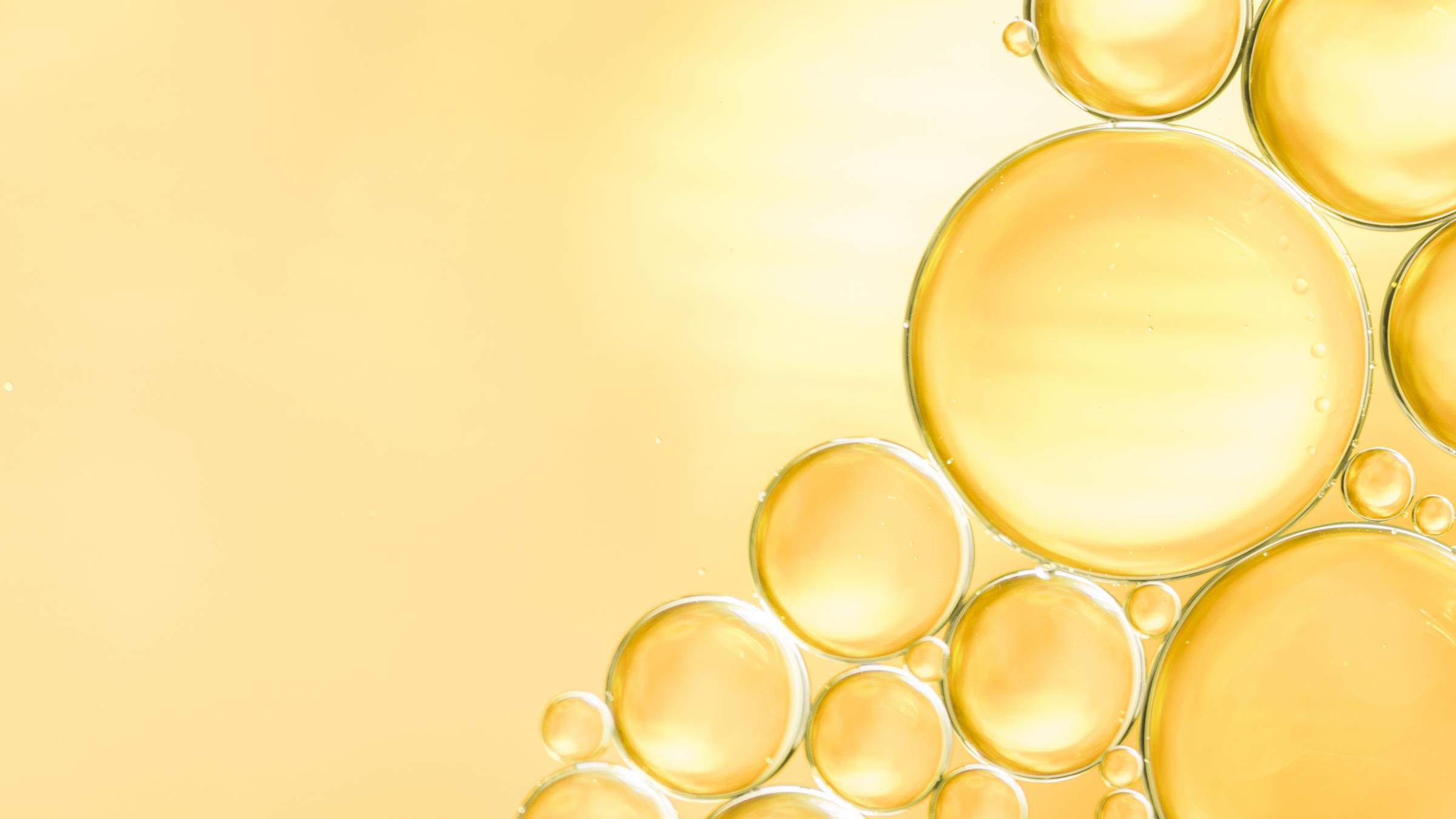 More than 60 different crops are grown based on the prevalence of different agro-ecological zones in Myanmar. These crops can be generally categorized into cereal crops, oilseed crops, pulses, industrial crops, culinary crops, vegetables and fruits (Aung 2005). Oilseed crops play an important role in Myanmar and are indeed the second most important crop after rice (Favre and Myint, 2009). Over 77% of the total oilseed crops production comes from Central Dry Zone of Myanmar: Sagaing, Magway and Mandalay Region. Major oilseed crops are groundnut, sesame, sunflower, mustard, and niger (DOA, 2020).

Edible oil is an important part of the Myanmar diet which is used for frying and is often just mixed with other foods such as rice to improve palatability. The locally produced major edible oils, namely groundnut, sesame, niger and mustard oils can be found in the market. Sunflower, soybean, rice bran and cotton seeds oils are not or are rarely found as pure oils in the market (Favre and Myint, 2009).

Palm oil becomes the major consumed oil although groundnut and sesame oils are primarily produced and sold in Myanmar. To fulfill the domestic requirement of the country, different types of edible oil have been imported from foreign countries and the vast majority of imported oil is palm oil. Figure 1 shows Myanmar’s importation of palm oil from 2012 to 2021 (USDA, 2021). The import of palm oil to Myanmar increased from 583,000 MT to 945,000 MT between 2012 and 2018. The current status of inflow of palm oil into Myanmar's oilseed crops sector has several negative impacts for oilseed crops farmers, consumers and the national economy. The suitable oils for consumption are unsaturated oil such as groundnut, sesame, sunflower, soya bean, mustard, olive, coconut, and rice bran oils. In addition, it is important to be able to consume healthy, safe and self-sufficient edible oil for the people in Myanmar. 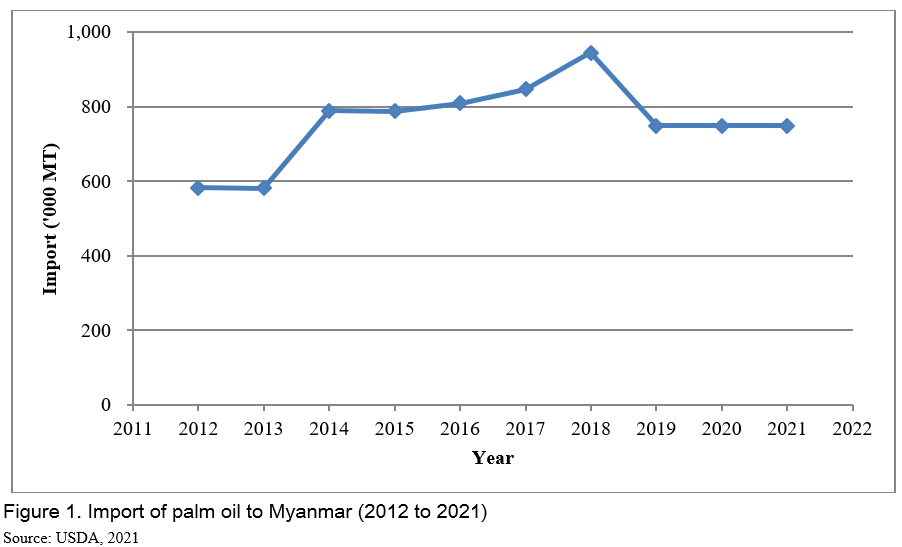 Oilseed crop, including groundnut, sesame, sunflower, mustard and niger, is one of the major crops in Myanmar and it covers 16% of national sown area.

In 2019-2020, 3.02 million hectares (7.55 million acres) of oilseed crops (groundnut, sesame, sunflower, mustard and niger) were cultivated with a total production of 4,430.81 thousand MT (196.75 million baskets). Myanmar holds the sixth position in the world rank for groundnut production. Groundnut is the most important oilseed crop which has been grown both in rain-fed and in irrigated areas. Groundnut sown area constitutes 26% of the total crops sown area and 36% of total sown area of oilseed crops (Figure 2). It produces about 3,329.48 thousand MT/ year or 144.76 million baskets (73% of oilseed crops production) (Figure 3). Groundnut is highly demanded from China while sesame is highly demanded from Japan, China, Korea and India. However, the groundnut sown area is becoming lower due to the fluctuation of groundnut price.

Sesame is one of the most popular oilseed crops in Myanmar and it is cultivated 1.50 million hectares per year (50% of oilseed crops sown area) and yield is about 1,210.30 kilograms per hectare (20 baskets/ac) and production is around 756.25 thousand MT or 30.88 million baskets (16% of oilseed crops production) (Figure 3). 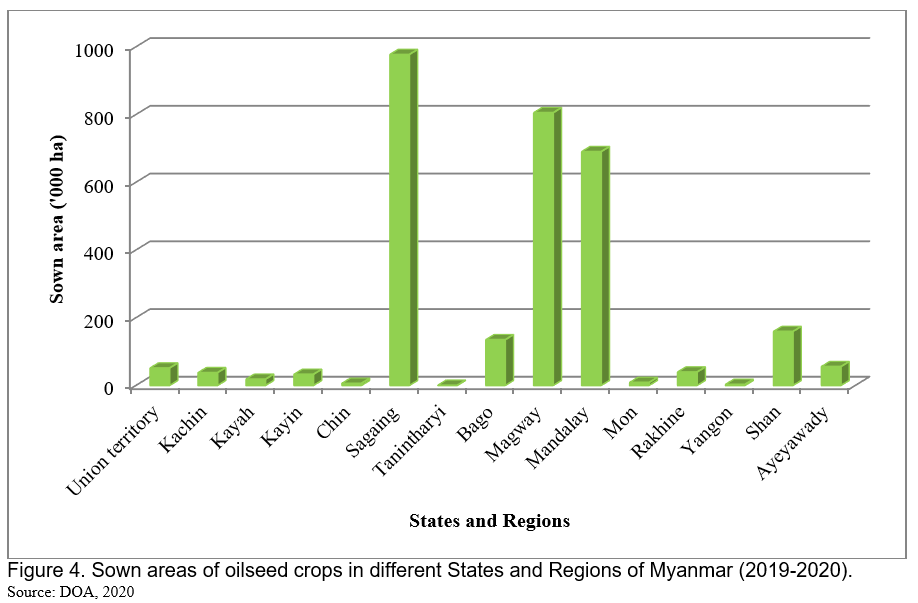 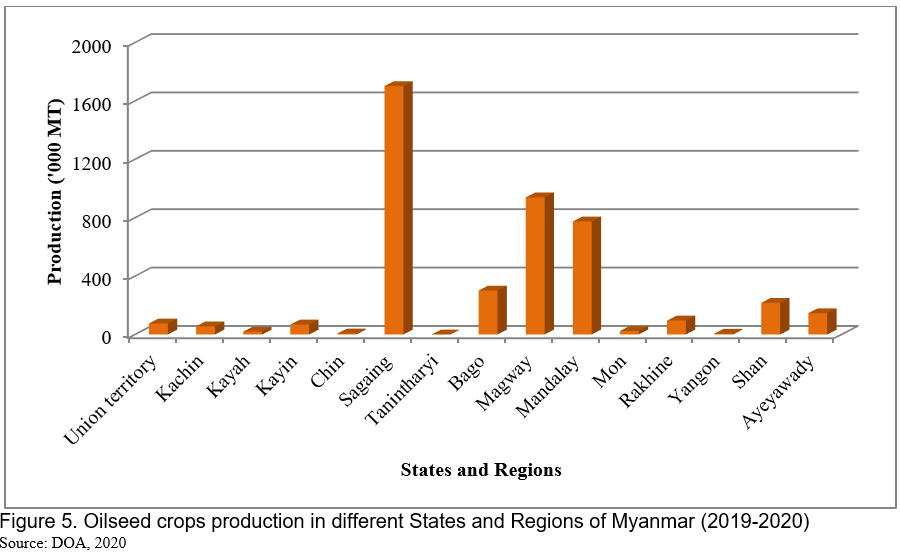 In addition to major oilseed crops such as groundnut, sesame, sunflower, mustard and niger, soybean can also be cultivated as a promising crop to produce healthy and nutritious soybean oil. In major soybean growing areas, the domestic edible oil requirement can be fulfilled by using the high oil yielding soybean varieties. Soybean contains the highest percentage of protein and fat content. The protein content in soybean ranges between 30% and 46% and the fat content ranges between 12% and 24%. The contents of both depend on type of soybean. It is one of the most popular vegetable oils in the world market.

Another potential oilseed crop is sunflower which can be grown in the different agro-ecological zones in Myanmar. If the current varieties are upgraded with the high yielding varieties by using the right planting time and sowing method, then, it would be beneficial for achieving self-sufficiency in edible oil.

Besides, palm oil is also possible to grow in Myanmar aiming to produce edible oil. This is because it is the second most consumed oil in the world. It takes about 3 years (two years after planting) to produce oil palm fruits suitable for harvest and can be commercially produced for up to 25 years. In areas with good climatic and topographic like Malaysia, oil palm tree can produce about 20 to 25 MT of fresh fruit bunches per hectare and about 4 to 5 MT of oil per hectare. Oil palm is an efficient crop, producing more oil per land area with least cost than any other equivalent vegetable oil crops. In the southern part of Myanmar, Tanintharyi Region, the yield of fresh fruit bunches of oil palm ranges from 12 MT to 17 MT per hectare. Therefore, as oil palm is a potential oilseed crop, it should be expanded with environmentally friendly standards.

Niger, which has tolerance for wild environment and climate conditions, can be grown as a potential oil seed crop. It can be grown all over the country although it is slightly cultivated in Shan State. Yields are generally in the 302.57 to 423.60 kilograms per hectare range (5 to 7 baskets/ac). The yield of oil from the niger seeds per kilogram is 0.40 kilogram (6 viss/ basket) and can be obtained over 120.83 kilograms per hectare (30 viss/ac).

Mustard, one of the best‐known oilseed crops, is cultivated in Kachin State and Chin State. The yield of mustard seed is about 516.34 kilograms per hectare (8 baskets/ ac) and oil yield per kilogram is 0.31 kilogram (5 viss/ basket). As it can be obtained 161.11 kilograms of mustard oil per hectare (40 viss/ ac), mustard should be more cultivated as a potential oilseed crop.

Safflower is mostly grown for producing the edible oil throughout the world. The yield from one hectare safflower field is 289.11 kilograms (5 baskets/ ac) and oil yield is about 0.42 kilogram per kilogram of seeds (6 viss/ basket). As safflower can be obtained 120.83 kilograms of oil per hectare (30 viss/ ac) and it can supply the local requirement in edible oil, it also should be cultivated.

Canada is the largest producer of canola oil, followed by Germany. Most varieties available today are genetically modified (GM) canola oil to be pest resistant. Canola oil is used in two ways: industrial and culinary. It is highly recommended for health due to its high Vitamin E content and as it is widely grown worldwide, its price is reasonable. The other produced edible oils are corn, coconut and rice bran oils.

There are a total of 3,600 expeller mills in Myanmar, of which 67% are small expeller mills. At present, about 90% of domestic edible oil mills have been stopped due to the selling of lower quality mixed edible oil and lack of proper competition in the domestic market.

In the domestic market, the selling of lower quality mixed edible oil is growing and this problem has been around since 2014. Palm oil is being chemically modified to obtain groundnut oil fragrance and is being sold all over the world. The government is preventing the sale of unstandardized and unhealthy products. This issue is difficult to resolve under the Food Trademark Act.

The reason concerns with the declining edible oil production in the domestic market and the decreasing availability of raw materials, which raises the price of oilseed crops in the local market as allowed to be exported, using the outdated domestic edible oil mills and importing low quality edible oil with various brands from neighboring countries.

In the current situations of oil mills in Myanmar, the cost of raw material, electricity and labor are high and the current growth of lower quality edible oil market which are mixed with groundnut fragrance are dominant, therefore, the mill has stopped as the processing cost do not cover.

According to the studies on self-sufficiency of edible oil, the edible oil production is insufficient in the states and regions of Myanmar besides the major oilseed crops growing areas: Sagaing, Mandalay and Magway Regions (Figure 5). Although there is a surplus of edible oil by calculating the production of oilseed crops and edible oil and per capita edible oil consumption (9.78 kg/year), palm oil still has been imported according to sources from Department of Agriculture. Therefore, it is necessary to analyze systematically. 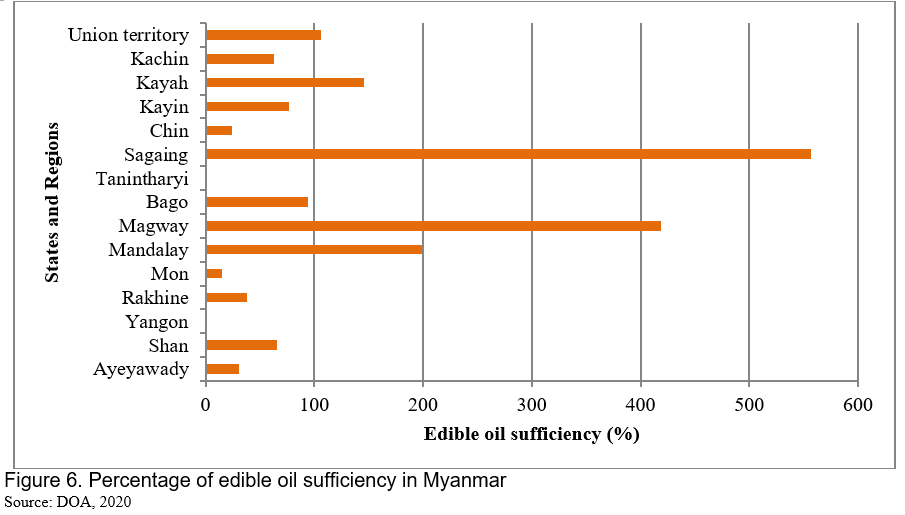 In the step of edible oil refining processing, oilseed crop sellers and buyers, oil mill operators and workers are mainly involved. In the marketing and distribution, edible oil wholesalers, retailers, transporters and distributors, related workers and consumers are particularly involved. In Myanmar, more than 90% of imported edible oils volumes are palm oil. According to the relative price in the domestic market, sunflower oil price is about twice, and groundnut and sesame oil prices are about four times higher than palm oil price. Imported poor quality palm oils with cheaper price bring negative impacts on health risks for the entire nation as the consumer protection laws deteriorate. Moreover, the export of edible oil seed crops and less production of domestic edible oil convey negative impacts on rising prices of meat, fish and shrimps since there is limited production of animal feeds from the edible oil milling sector. Therefore, policy intervention is needed in the trade issue of oilseed crops and the edible oil sub-sector.

There is a need to expand existing oilseed crops production depending upon the types of oilseed crops and the geographically conditions in each region of Myanmar. In order to do so, the agricultural sector should mainly support not only good quality seeds and quality inputs aiming to increase the production of oilseed crops but also quality maintenance and processing post-harvest loss minimization technologies to obtain high quality yields for the oilseed crops farmers. In addition to prioritize oilseed crops particularly groundnut, sesame and sunflower, healthy edible oils with reasonable price such as niger, mustard, safflower, soybean, corn, vegetable, coconut, cotton seed and rice bran oils should also be produced locally. Palm oil is also used in food manufacturing and as industrial raw products. Therefore, oil palm should be more cultivated with environmentally friendly standards as it is a promising crop. It is necessary to implement contract framing and for achieving international certified seeds for growers in order to widely cultivate palm oil in the long term.

In the case of the edible oil sector of Myanmar, edible oil refinery plants and store houses are required in order to domestically produce oilseed crops into refined edible oil. The industrial sector should particularly support raw products cleaning facilities, modern cold storage facilities and equipment, upgrading technologies and distribution of healthy edible oils to achieve sufficiency in refined edible oils. In addition, transporters, traders and consumers who are involved in marketing and distribution also need to follow the Food and Drug Administration law. It is relevant to all stakeholders in each sector of Myanmar to develop the edible oil sub-sector and to access safe and secure edible oil. It is also necessary to improve the Food and Drug Trademark laws and policies for oilseed crop farmers, traders and oil mill operators who involved in the value chain of edible oil. There are two major markets for oilseed crops, domestically oil milling and export. In the domestic market, it is very important to improve productivity from the oil milling of the industrial sector.

Aung Kyi. 2005. Enhancing the Sustainable Development of Diverse Agriculture through CGPRT Crops in Myanmar: Current Status of CGPRT Crop Agriculture and Identification of its Development Constraints, CAPSA Working Paper No. 85.

From Ridge-to-Reef: A Community-Based Participatory Approach to Biodiversity Conservation of Marine Resources in Batad, Iloilo, Philippines

Learn more
END_OF_DOCUMENT_TOKEN_TO_BE_REPLACED
You are using an outdated browser
For a better experience using this site, please upgrade to a modern web browser.