The recent outbreak of COVID-19 in South Korea has significantly changed food consumption behavior. While sales in the restaurant business declined as consumers who concerned about infection refrained from going out, the number of having meals with family members at home increased, which led to increased sales of both delivery/take-out foods and agricultural products from nearby grocery stores. In addition, sales of online retail channels increased, and sales in a limited type of offline channels such as supermarkets near residential area increased. We also found that since the outbreak of COVID-19, consumer awareness of food security has been enhanced, implying that the importance of domestic agriculture and food industry will be strengthened in the Post-COVID-19 era.

Since the end of 2019, COVID-19 has been spreaded around the world changing the lifestyles of the people. South Korea could not be an exception of this impact. Concern about infection has forced people to wear masks all the time and refrain from going out. COVID-19 has also altered the way people consume foods. People choose to order a delivery service rather than to go out for a meal. And they refrained from the places where people were gathered.

The change in behavior is assumed to effect on the market related to the food consumption. As the food business is more labor-intensive than other industries, it is important to identify consumption patterns changed by COVID-19 and to derive policy implication to minimize the impact on labor market. This study identified the change in consumption patterns and their impact on the market in South Korea. We hope that this case study in South Korea could  be an informative case to be referred for the countries who are suffering from the disease.

THE SPREAD PROGRESS OF COVID-19 IN SOUTH KOREA

The COVID-19 became known to Korea after the first report of the World Health Organization (WHO) on December 31 since it was first discovered in Wuhan, China on December 1, 2019. The first official confirmed case in Korea appeared on January 20, 2020, and the sixth confirmed case due to secondary infections appeared on January 30, followed by the cases from 7 to 11 on January 31 did. On February 18, 2020, the 31st confirmed cases occurred in Daegu, and the community infections spread around the Daegu/Gyeongbuk area. Subsequently, COVID-19 infection spread across the country, and the Korean government raised its crisis alert to the 'serious' stage on February 23, 2020. With the rapid spread of COVID-19 around the world, the World Health Organization (WHO) declared the pandemic stage, the highest risk level of the epidemic warning stage on March 11th (Table 1). 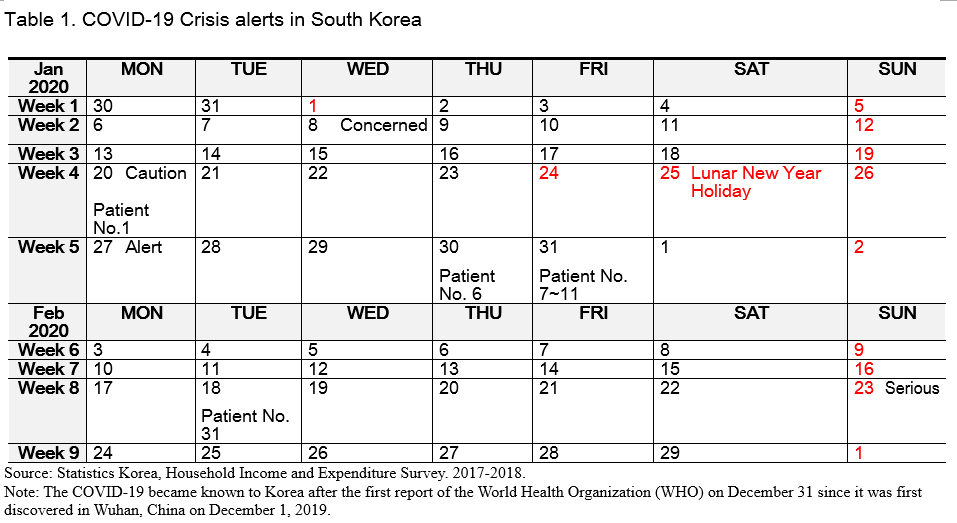 90.8% of our survey participants answered that they refrained from going out after the spread of COVID-19 in Korea[1]. To the question of 'Did you refrain from going out due to the spread of COVID-19?' 52.4 % of the survey participants said 'Strongly agree', followed by ‘Agree' (26.3%) and 'Weakly agree' (12.1%) (Fig. 1). By region, 93.8 % of respondents in Daegu/Gyeongbuk area said that they refrained from going out, where infection has spread more severely compared to the other regions of Korea since the 18th of February.

THE IMPACT OF COVID-19 ON SALES IN GROCERY RETAIL STORES: POS DATA ANALYSIS

Despite concerns over potential shrinking of consumption due to the impact of COVID-19, the grocery sales of retailers rather increased as food consumption shifts from eating out to home cooking. The POS (point of sales) data below shows that food sales in the retail channels increased in January 2020.  However, the increase in sales could be the seasonal effect of the Lunar New Year holidays.

The increase in food sales from the 3rd week of February in 2020 appears to be influenced by COVID-19 (part G in Fig. 2). During this period, food sales increased 11.0% year-on-year, followed by 15.9 % year-on-year increase in the 4th week (Fig. 3). This is the time when the 31st Super-spreader, known to have contacted 166 people in Seoul and Daegu, was reported through the media. Also, it is the time when the government has elevated its alert to the “serious” stage. We believe that the increase in food sales during this period is due to the fact that most of the people refrained from outside activities to avoid contact with others, converting their demand from eat-out to home-cooking. 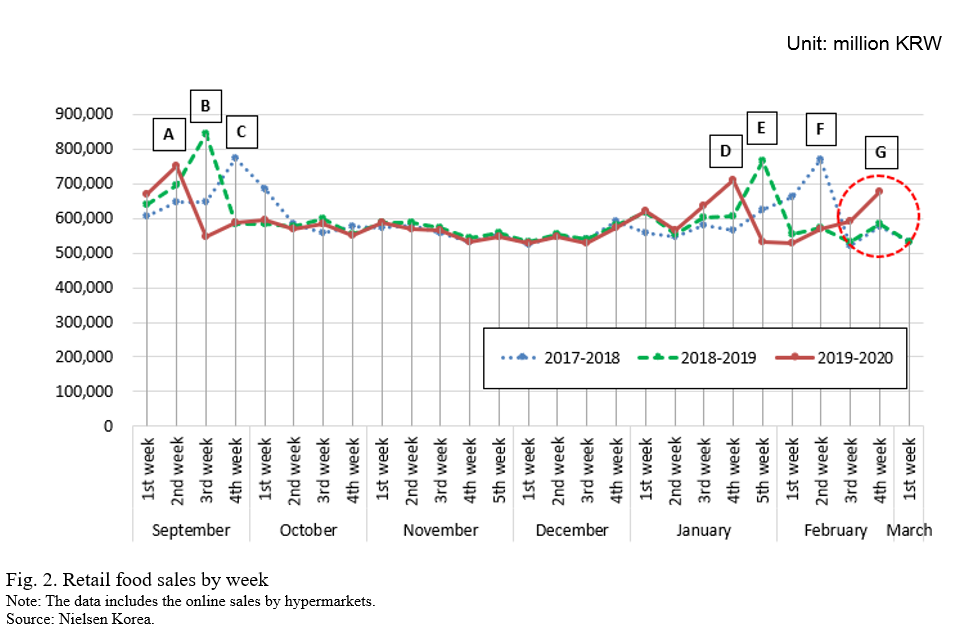 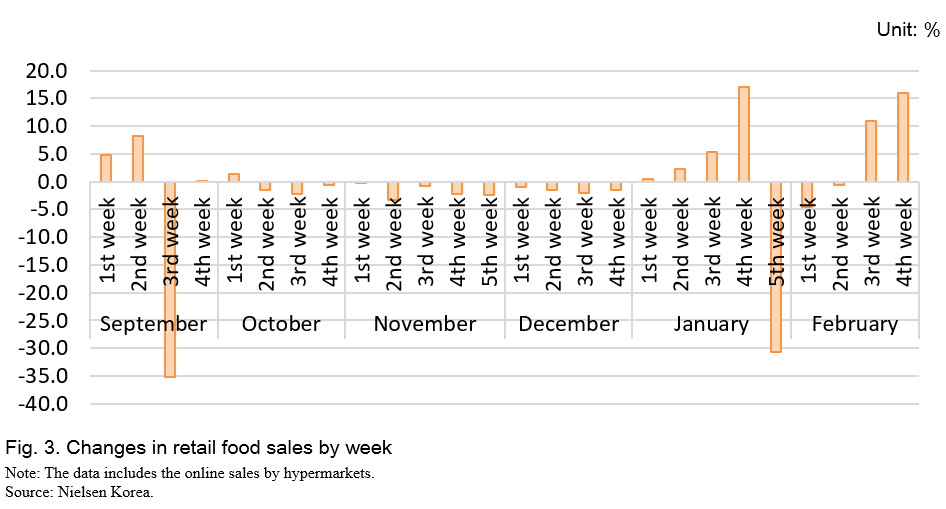 In addition, the average purchase cycle after COVID-19 became longer than before COVID-19. Before COVID-19, the proportion of respondents who visit grocery store by 2~3 times per week was about 41.7 % but after COVID-19, it decreased to 18.2 %; however, the proportion of respondents who visit grocery store less than once every two weeks slightly increased after COVID-19 (Fig. 4). An increase in grocery sales in spite of the decrease in frequency of the customers’ visits shows that the amount of purchase at once has increased to refrain from going out.

CHANGE IN COMPOSITION OF RETAIL CHANNEL AFTER COVID-19

COVID-19 made winners and losers in the retail channel; our research shows that online and a few types of offline channel had increased its grocery sales, while hypermarkets lose its sales after COVID-19.

In the case of the offline channel, mid-to-large scale marts located in residential areas increased its sales as consumers are reluctant to visit hypermarkets with high population density. In February, the proportion of hypermarkets in food retail channel was 24.3 %, decreased number by 4.8 % points compared to the previous month. On the other hand, sales of private-large, chain-large, convenience stores and private-medium stores increased compared to the previous month (Table 2). This is because consumers who are reluctant to contact the others increased their purchases through retail stores that provide good delivery service and have good access to food.

In the survey we conducted, 24.3 % of our survey respondents said they changed their offline grocery store to another type of store under the influence of COVID-19. Respondents changed their store from hypermarkets to other retailers (to independent supermarket: 39.9%, to chain supermarket: 11.9%, to convenience store: 5.85%).

For the online channel case, the sales increased widely. As consumers who are reluctant to face-to-face activities have changed their way to purchase food, the proportion of online sales by hypermarket in retail food sales in February averaged 4.1%, increasing 1.0% from last month. Also, online sales accounted for 16.9% of the total sales of food products in hypermarket in February increasing by 6.1% from last month (Table 2).

According to the survey, 56.6 % of respondents increased their spending in online grocery stores after COVID-19 (Fig. 5). Especially, those who are in their age of 30s (63.4%) or 40s (60.8%), living in Seoul (62.1%), or in the area where the infection had been reported (63.7%) answered that they used online grocery channel more than the other respondents. Furthermore, the proportion of respondents who ‘greatly increased’ the online channel usage is high in their 40s (19.2%) or in Daegu/Gyeongbuk area (20.8%). It is likely that in the case of people in their 40s, there would have been young children in their home so they took care of their children, and in the case of people in Daegu/Gyeongbuk area, the number of confirmed cases had increased sharply from February to March so they refrained from going outside.

CHANGES IN EAT-OUT AND DELIVERY/TAKE-OUT BEHAVIOR

The number of dining outs has decreased significantly since COVID-19 outbreak, while delivery/take-out tends to increase. In the survey, 81.0 % of respondents said that they decreased their number of eat-outs due to COVID-19 outbreak, while 44.9 % of respondents said their number of the use of deliveries/take-outs had been increased (Fig. 6). The decreases were especially deep in 40s (85.8%), Daegu/Gyeongbuk area (91.7%), households with two or more members (87.5%) and the area where confirmed cases occurred (85.8%).

Delivery/take-out seems to have increased because consumers can choose the place to eat at home or at work, avoiding contact with a number of people. The result shows that consumers replace eat-out with delivery/take-out in the case that they prefer to purchase foods rather than to cook by themselves. The proportion of respondents who reported the increase in delivery/take-outs consumption was relatively high in the group of 30s (51.3%), living in Seoul(52.5%), or living in the region with confirmed cases (50.0%).

Meanwhile, about 20% of respondents said they reduced delivery/take-out consumption. It is possible for them to distrust such foods concerning the infection or the sanitary conditions of cooking facilities. 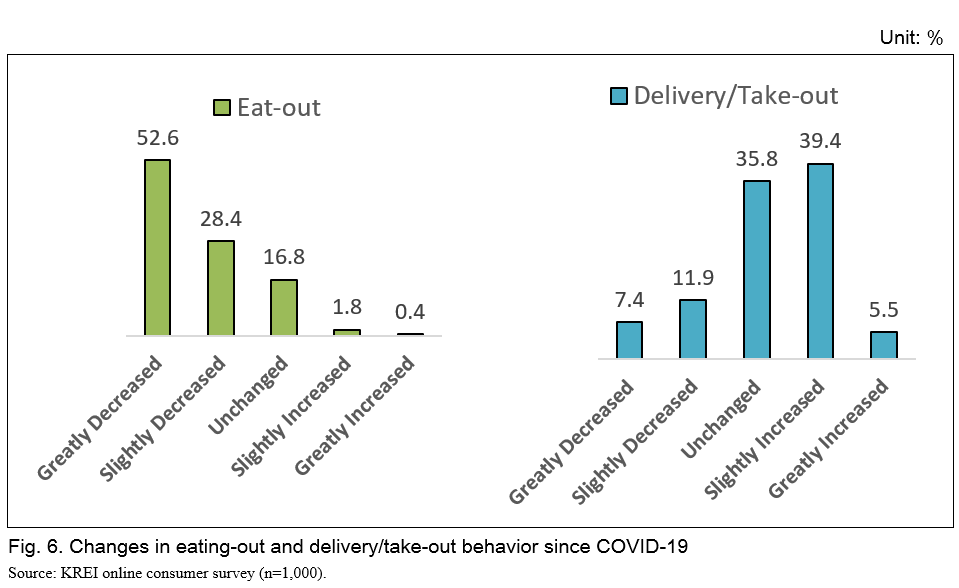 78.2 percent of respondents said they were eating health functional foods more frequently after COVID-19. We assume that this survey result shows the fact that consumers are trying to strengthen their immune system to prevent COVID-19.

Among health functional foods, vitamins and minerals (55.0%) and ginseng (31.7%) were found to have increased significantly (Table 5). This is expected to be related to the spread of rumors that vitamin C prevents COVID-19 on the Internet and social media in the early stages of the disease. Several media reports also supports this supposition; they report that during the last MERS crisis in Korea, 2015, consumption of health-functioning foods, as well as foods known to be good for boosting immunity, such as tomatoes, red ginseng, garlic, broccoli and onions, sharply increased[2],[3].

Moreover, the instability of the supply of masks and food caused by the spread of COVID-19 served as an opportunity to strengthen awareness of the importance of domestic agricultural production and food security. According to our survey, 84.2 % of the respondents agreed on the importance of domestic production and self-sufficiency of agricultural products. This shows that the perception that essential goods such as food must achieve a certain level of self-sufficiency has spread more than before.

Sales at restaurants are on the decline as consumers concerned about COVID-19 infection refrained from going out. However, as the number of having meals with family members increases, food sales at retail grocery stores near residential area has increased. Looking at the changes in food sales in retail channels through POS data analysis, sales have risen since the third week of February when a big outbreak of COVID-19 was observed, mainly at mid- to large-sized grocery stores located in residential area. In the future, small and medium-sized supermarkets near residential areas with high accessibility and delivery benefits are expected to continue to increase sales, and also, the stimulus check issued by government will be of great help to these businesses.

Changes in food consumption patterns have occurred since the COVID-19 outbreak, with sales of online retail channels increasing. According to the KREI’s consumer survey, 56.6 % of the respondents said they have purchased foods more frequently online since COVID-19 outbreak. In particular, 63.4 %  of those in their 30s, 60.8 %  of those in their 40s, and 62.1 % of those living in Seoul increased online food shopping.

While the number of eat-outs has been on decline since COVID-19 outbreak, there has been an increasing trend in the case of delivery/take-outs. With the transition in government guidance from ‘social distancing’ to ‘distancing in daily life[4]’, small and medium-sized restaurant businesses are expected to recover. However, as short-term deterioration of business can lead to a total closure, continuous policy attention is needed.

Also, consumers’ awareness of the importance of food security is increasing. It is implied that the experience of the temporary increase in the consumption of essential foodstuffs due to COVID-19 has served as an opportunity to recognize the importance of domestic agriculture and food industry.

[1] The survey was conducted for 1,000 consumers using a structured questionnaire, and was conducted online from March 11, 2020 to March 16, 2020, by requesting the research institute MACROMILL EMBRAIN.

[4] The government of South Korea had changed its guidance to respond to COVID-19 from ‘social distancing’ to ‘distancing in daily life’ by 6th of May in 2020.

The Incentive Policy for Development of Cooperation in Production and Consumption of Agricultural Products, and Vast Crops

Learn more
END_OF_DOCUMENT_TOKEN_TO_BE_REPLACED
You are using an outdated browser
For a better experience using this site, please upgrade to a modern web browser.