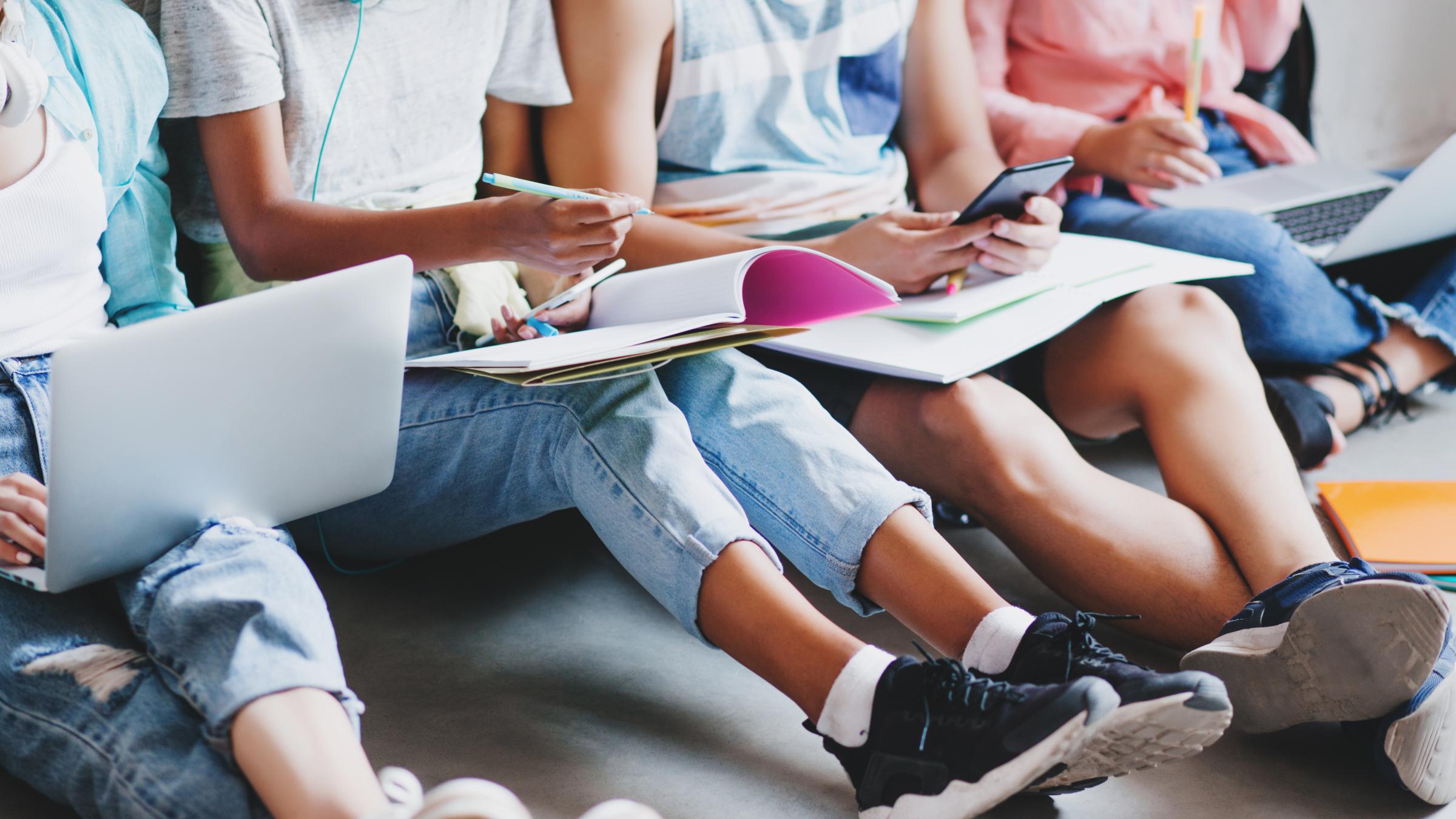 We estimated the decrease in the amount of agricultural product purchases by calculating the change in restaurant sales and the change in agrifood for school meals after Coronavirus Disease 2019 (COVID-19) outbreak based on the data from NAVER Co., Ltd. and Statistics Korea (KOSTAT). The results show that the consumption of agricultural products in the restaurant industry has decreased by 2,018 million US$ as restaurant sales decline. It is also estimated that the use of agrifoods has reduced by 555 million US$ because of the postponement of the new semester for elementary and secondary schools. In response to the potential wave of a global pandemic that may lead to the change in demand for agrifood products for the restaurant industry and school meals, the government and agricultural sector should prepare for countermeasures such as alternative marketing channels, storage management, and sales promotion events. It is urgently needed to establish not only short-term plans but also mid- to long-term plans to support producers and distributors in the food supply chain to provide safe and fresh agricultural products to consumers.

The COVID-19 pandemic has caused people to stay at home and to avoid eating out, resulting in a decrease in restaurant sales. In addition to the restaurant industry, farmers could be damaged by the COVID-19 as restaurants are more likely to purchase less agricultural food ingredients. In addition, the Korean Government‘s Ministry of Education, had decided to delay the beginning of the new semester and to start with remote schooling to ensure student safety against the COVID-19[1]. With the surge in the COVID-19 confirmed cases from clubs in Itaewon, Seoul on May 10, the school opening scheduled for May 13 was postponed for a week[2]. As a result, food ingredients for school meals were not provided due to the suspension of school meals, deepening the difficulties of suppliers of food ingredients for school meals.

It is necessary to assess changes in the purchase of agricultural products in the restaurant industry and schools due to COVID-19. Therefore, we analyzed how much the change in restaurant sales and the postponement of school opening will affect the purchase of agricultural products. We expect to provide implications for the governments around the world that can help establish measures against damages to restaurants and farms caused by COVID-19.

EFFECTS OF COVID-19 ON RESTAURANT SALES

The index fell from 98.3% in March 2019 to 66.8% in March 2020, down 32.0%. As the confirmed cases in South Korea reached a serious level in March, it shows that people were reluctant to go out. This could be an evidence that sales in the restaurant business decreased by more than 30 % year-on-year in March this year, and it is a clear indication of the financial difficulties in the restaurant business, which have been frequently reported in media[5].

Change in restaurant sales by region 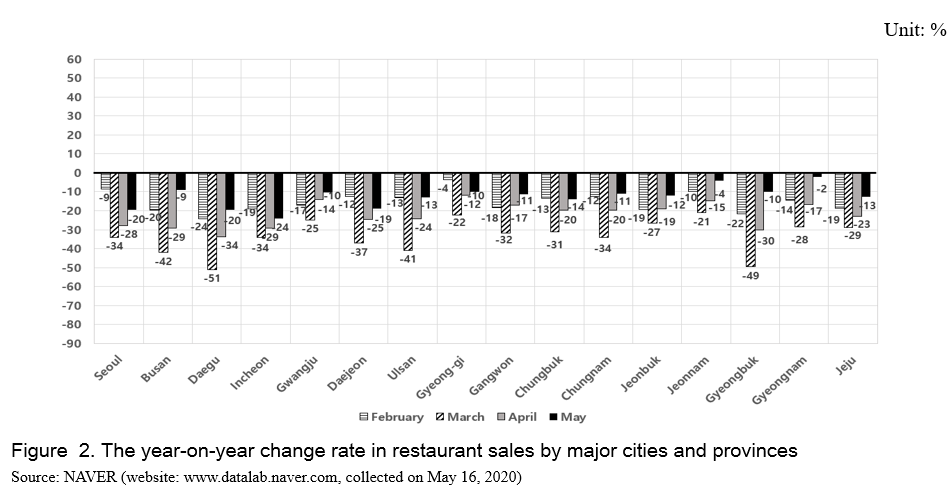 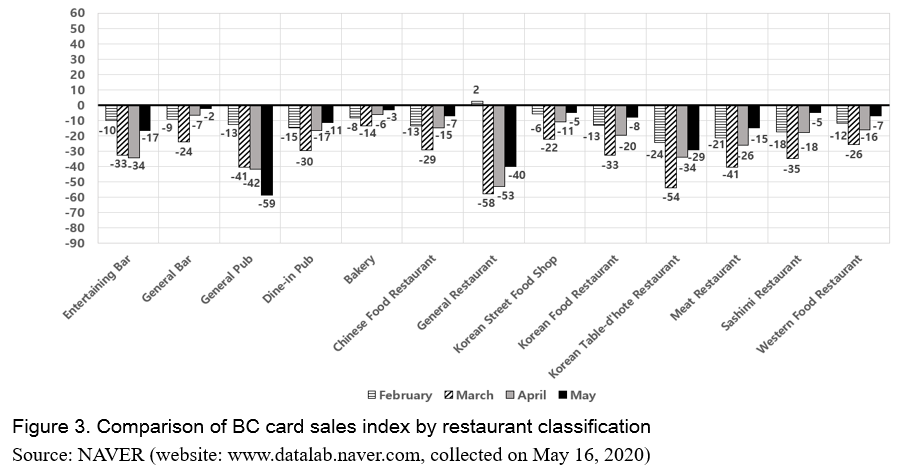 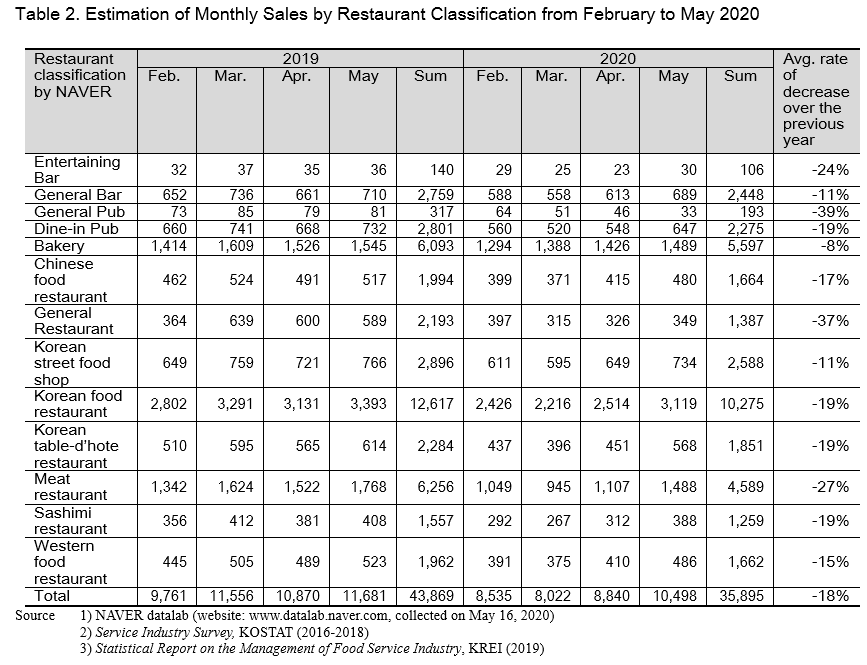 We also estimated the change in the purchase of agricultural products that could be affected by the change in sales in the restaurant industry by the following steps. First, we computed the level at which restaurant sales by region and businesses would decrease after the COVID-19. And then, we estimated how much this would result in a decrease in agricultural purchases, by region and business classification.

Estimation of monthly sales of restaurants in 2020

The estimates of monthly sales for each restaurant industry in 2020 are presented below (Table 3). The monthly sales of restaurants in all industries in 2020 were lower than the monthly sales level in 2019. The year-on-year decline rate was high in the order of pizzas, hamburgers, sandwiches, etc (-35.3%), Draft beer pubs (-32.4%), Korean restaurants specialized in meat (-30.9%), Entertaining bars with singing (-26.4%), and Japanese restaurants (-24.1%). Restaurants that are often used as meeting places have a higher rate of decrease in sales compared to other industry categories. Also, except for pizzas, hamburgers, sandwiches, etc., the other four businesses are businesses whose liquor sales account for a large portion of their sales. We thought that consumers visiting these stores for drinking have changed their consumption patterns due to COVID-19.

On the other hand, coffee shops (9.8%) and bakeries (9.4%) that mainly sell packaged products showed a relatively lower average year-on-year drop in sales from February to April compared to other businesses.

In addition, the result indicates that restaurant sales in Korea have recovered from last month’s sales, although the level of sales in each restaurant business has been lower than last year. According to a report by the Ministry of Public Administration and Security, consumers have spent 24.8 % of their total stimulus check on the restaurant sector[7]. We believe that this consumption behavior has been reflected in this analysis. 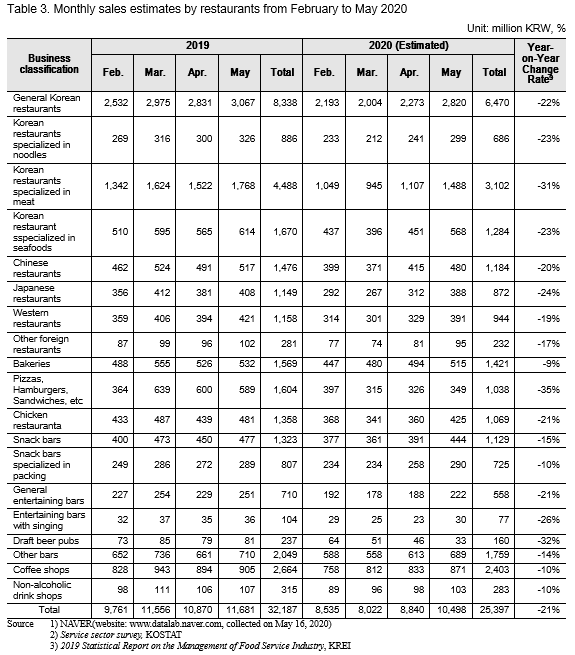 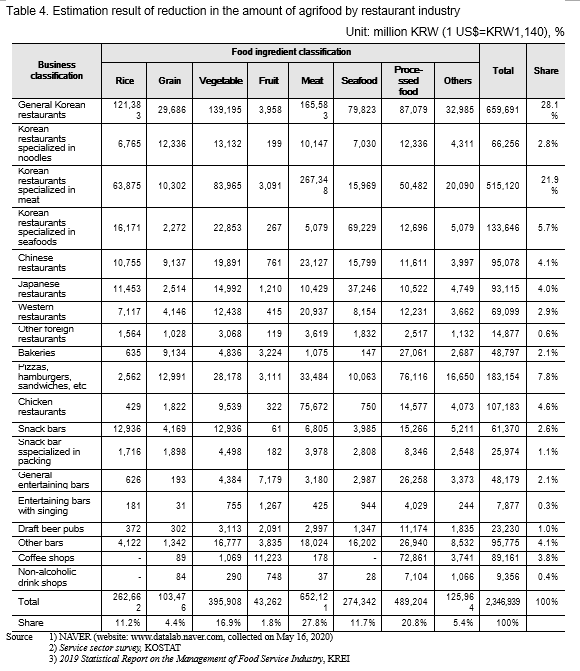 In this analysis, the amount of damage to food suppliers due to COVID-19 was estimated. We assumed that school meals for 2020 will be completely suspended until May to estimate unused supplies in 2020. It is also assumed that from March to May of 2019, school meal consumption will continue to occur during the same period in 2020. The data used in the analysis is provided by the Korea Agro-Fisheries & Food Trade Corporation (aT). aT operates the Agricultural and Fishery Products Cyber Exchange (eaT), where data on agrifood transactions for school meals can be obtained. The data was employed to estimate the damage in the school meal sector due to COVID-19.

The result suggests that 140,900 tons of food ingredients were not used for school meals as the beginning of the new semester was suspended and schools operated both in-person and remote educations. The value of the unused amount of food ingredients is $555 million (Table 5). In particular, food suppliers that provide necessary items for school meals, such as meat, vegetables, grains, and fish are expected to suffer relatively large damages. About 16,600 tons of meat were not used, which is equivalent to about $147 million. Also, the unused amount of vegetables is about 25,900  tons, followed by 22,900 tons of grains, 22,000 tons of milk, and 16,600 tons of meat. 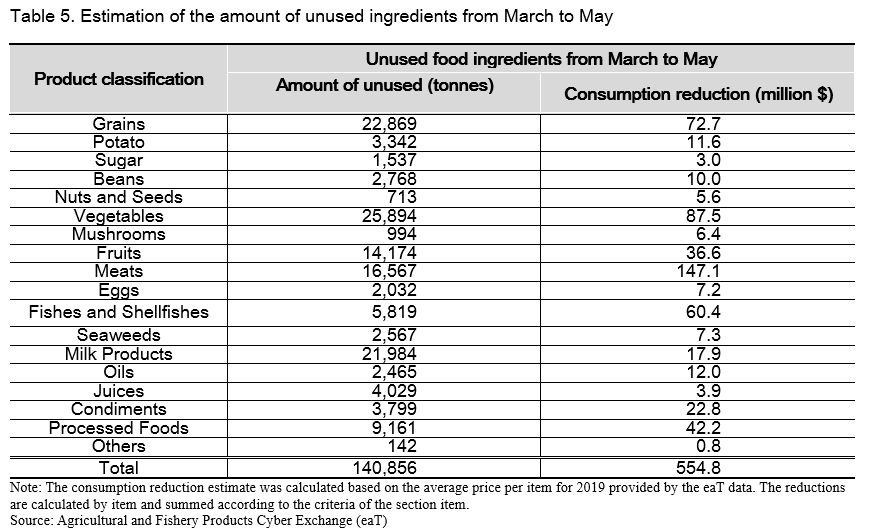 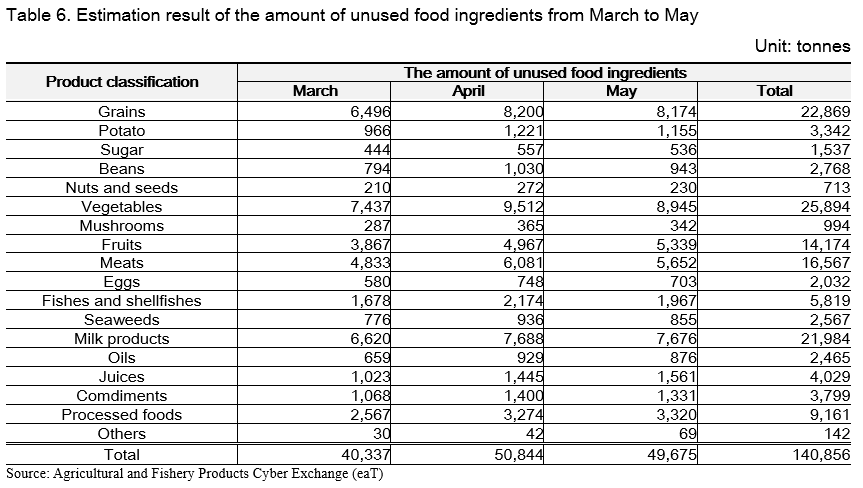 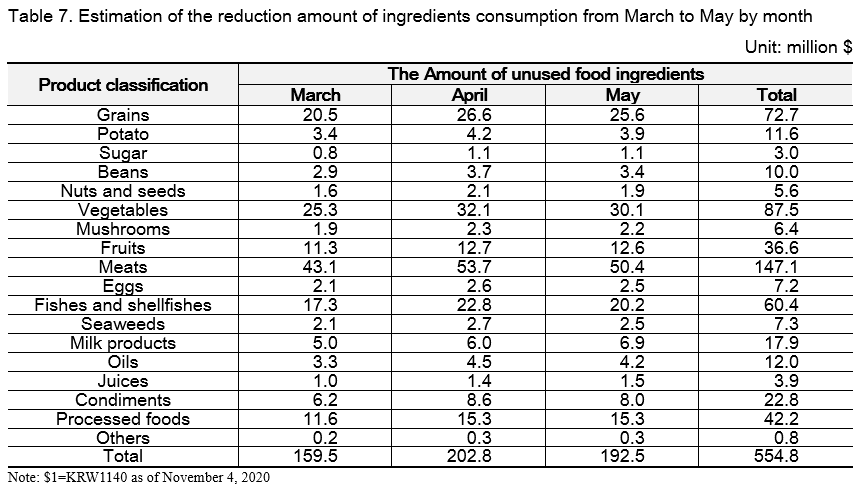 It is analyzed that the consumption of agricultural products has decreased due to the reduction of restaurant sales and the suspension of school meals since the spread of COVID-19. Not only producers of agricultural products but also food suppliers are suffering from falling demand for dining out and the suspension of school meals. From February to May 2020, restaurant sales are estimated at about $22,105 million, indicating a significant decrease by 22 % compared to the same period of 2019. It is also estimated that the amount of agrifood purchased by restaurants nationwide has decreased by 2,018 million US$ during the February through May period of 2020 due to the decrease in sales. Besides, the amount of unused agrifood for school meals caused by the postponement of school opening is estimated to reach 555 million US$, with 159 million US$ in March, 203 million US$ in April, and 193 million US$ in May.

In response to these difficulties, both the central government and local governments in South Korea are holding a variety of events to promote the consumption of agricultural products, especially focusing on the agricultural products that are easily perishable. For example, consumption-promoting events by cooperating with retailers and supplying relief foods to people who are in self-quarantine are implemented by the governments[9].

In addition to these short-term remedies, however, mid- to long-term measures are also needed for sustainable management in the restaurant industry and the supply chain of school meals. This is because the second (or further) wave of COVID-19 approaches in South Korea, the continuous decrease in the use of agrifood products should be redirected in the supply chain of agrifoods for restaurants and school meal ingredients. For example, suppliers should include diversification of marketing channels for agricultural products. Finally, in response to the contraction of agricultural consumption in the wake of similar national emergencies in the future, such as COVID-19, both central and local governments need to improve countermeasures to continuously supply safe and fresh agricultural products to consumers and increase producer’s income stability.

Ministry of Agriculture, Food and Rural Affairs. (2020, April 21). Supporting ‘benevolent consumptions’ to help farmers who lost their demand due to COVID-19.

Ministry of Education. (2020, March 31). For the first time, the new semester of elementary, middle and high schools will open online. Retrieved from  https://www.moe.go.kr/boardCnts/view.do?boardID=294&boardSeq=80160&lev=0&searchType=null&statusYN=W&page=1&s=moe&m=020402&opType=N.

Ministry of Education. (2020, May 11). Teaching schedule adjustment due to the spread of the disease from Itaewon. Retrieved from https://www.moe.go.kr/boardCnts/view.do?boardID=294&boardSeq=80575&lev=0...

Ministry of Public Administration and Security. (2020, June 10). Stimulus check has been most commonly used in restaurants. Retrieved from https://www.mois.go.kr/frt/bbs/type010/commonSelectBoardArticle.do?bbsId...

The Food and Beverage News. (2020, March 6). Customer reduction rate reaches about 60% since the outbreak of COVID-19. Retrieved from https://www.thinkfood.co.kr/news/articleView.html?idxno=86702

[2]  “For the first time, the new semester of elementary, middle and high schools will open online”, Ministry of Education. Reported on March 31, 2020.

[3] “Teaching schedule adjustment due to the spread of the disease from Itaewon”, Ministry of Education. Reported on May 11, 2020.

[4] The BC Card transaction covers both credit and debit card transactions. The BC Card users account for about 25 % to 26 % of total credit and debit card transactions , and we believe that BC Card users' card usage behavior will represent the entire card usage behavior. According to BC Card Co., Ltd., the company itself compares data from other credit card companies, the Bank of Korea and the Credit Association with its statistics on credit card usage, and the trends from those data shows almost the same trend.

[5] The length of data is fixed at 13 months, which means, after one month, the most past one month data is excluded and the most recent one is added to keep the 13 months period. Also, the highest monthly turnover of 13 months is set at 100, and the sales figures for the rest of the year are indexed. Therefore, we recalculated the relative index of each months setting the month of highest usage from February 2019 to May 2020 as 100, and used it for the analysis.

[8] “Stimulus check has been most commonly used in restaurants,” Ministry of Public Administration and Security, Reported on June 10, 2020.

[10] “Supporting ‘benevolent consumptions’ to help farmers who lost their demand due to COVID-19,” Ministry of Agriculture Food and Rural Affairs. Reported on April 12, 2020. 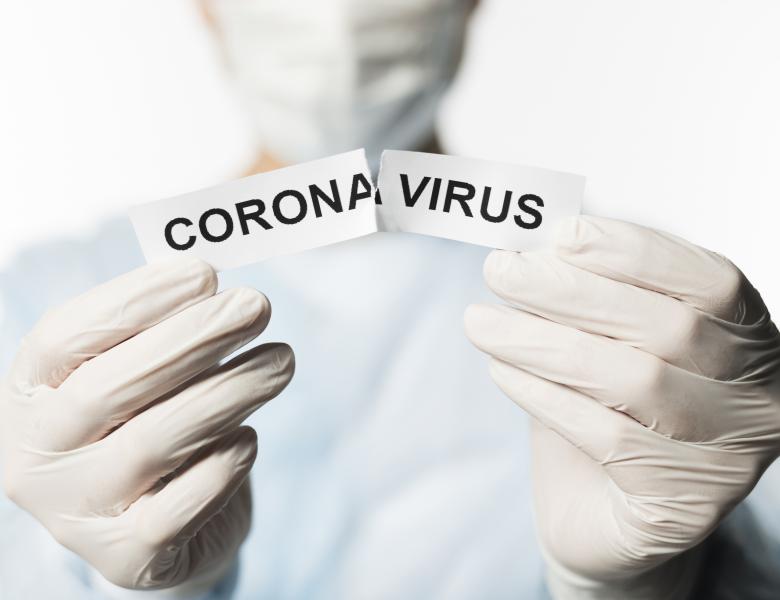 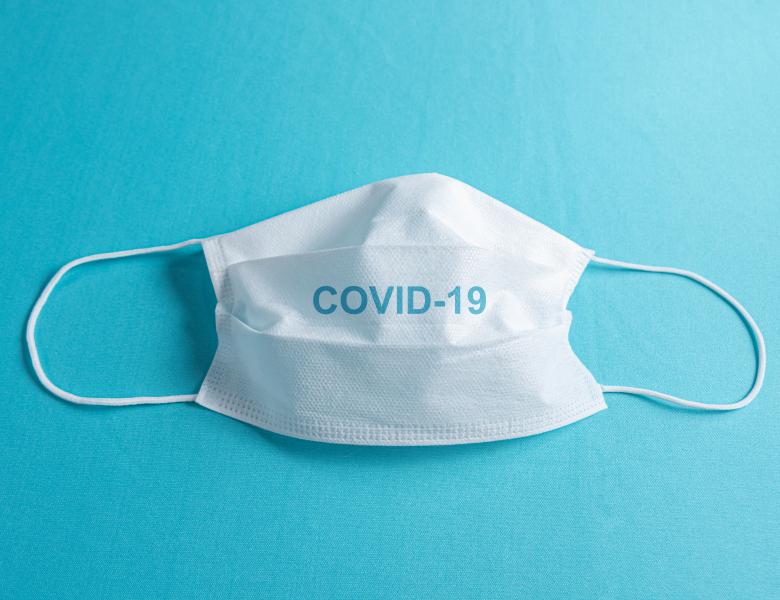 Promotion of the Local Consumption of Local Products

Learn more
END_OF_DOCUMENT_TOKEN_TO_BE_REPLACED
You are using an outdated browser
For a better experience using this site, please upgrade to a modern web browser.