Potato becomes one of the potential crops for global food security issue because of its high nutrient content and goodness of eating. In Myanmar, potato is widely grown in Southern Shan State. Therefore, this research aims to study the profitability of potato production in four townships in Taunggyi District, Southern Shan State. Simple random sampling was used to select 1,280 monsoon potato farmers from four townships by using structured questionnaire in 2021. The average cultivated area of monsoon potato in the study area was 0.78 hectare (ha) and the average yield was 17.12 MT/ha. The highest yield was found in Pinlaung Township while the lowest yield was found in Hsihseng Township. The average production variable cash cost was US$ 2,686/ha and the average gross benefit was US$ 3,406/ha. Consequently, the average net benefit was US$ 720/ha. Both the highest cost of production and the highest gross benefit per hectare of monsoon potato was found in Hopon Township whereas the lowest cost of production and the least gross benefit was found in Hsihseng Township. Kalaw Township where farmers had received the highest net benefit of monsoon potato per hectare, however, farmers in Hsihseng Township obtained the least of it. During the study period, the average market price of potato was US$ 199/MT. So, the average breakeven price of monsoon potato in the study area was US$ 157/MT and the average breakeven yield was 13.47MT/ha to cover the cost of production. Nevertheless, there were many factors to vary production cost and profitability of potato production which are soil fertility level, capital investment, usage of improved and high-yielding varieties, usage of different amount of inputs, climate conditions, pest and disease infestation, adoption of high yielding practices, accessibility of market information, communication, and market demand. To sum up, it is necessary for farmers to choose climate resilient varieties and market demanding varieties so that they could get higher income and economic profit by producing monsoon potato in Shan State. Continuously, it is still needed to do further studies in the potato sector that would lead to upgrade the socio-economic status of potato farmers in Shan State.

Fresh vegetables are an essential part of a healthy diet and potatoes are a nutritious crop which is widely grown and consumed not only in the world but also in Myanmar. As a result, farmers in various parts of Myanmar are growing more and more potatoes to meet the demand for the products. Nowadays, the potato is a popular vegetable and one of the main culinary crops in Myanmar’s households because most people eat potatoes as a dish or a snack. Subsequently, potatoes are also an important cash crop for farmers in Myanmar (Pronk et al., 2016).

Almost all farmers in Shan State grow at least two crops at each season to protect their investments. As a result, most potato farmers share their land with turmeric and potato. Furthermore, Shan State is also a major potato distributor for the rest of Myanmar. According to the above information, the largest potato-growing areas in Myanmar are the townships in the Southern Shan State, Taunggyi District. Among these townships in Taunggyi District, the main townships for growing monsoon potatoes are Kalaw Township, Pinlaung Township, Hopon Township, and Hsihseng Township.

Objectives of the Study

Field surveys were conducted by using simple random sampling methods based on statistics and by using survey questionnaires. According to the survey procedure conducted in Kalaw and Pinlaung Townships, a systematic random sampling method was used to select the sample farmers when the specified number of the complete list of the targeted population was obtained. But it was not necessary to determine the appropriate sample size in Hopon and Hsihseng Townships because the total numbers of monsoon potato farmers were fully surveyed.

To study the agricultural production costs and net profits of monsoon potatoes in Southern Shan State, a field survey for primary data collection was undertaken in May 2021. For the primary survey, the total sample size was 1,280 potato farmers. The survey was conducted using a face-to-face interview method for the sample farmers using survey questionnaires. In the interview, it makes sure that the enumerators did not influence the farmers’ answers to the questionnaire. The main data of the survey questionnaire were yield per hectare (ha), price per metric ton (MT), production costs per hectare, and net benefit per hectare of monsoon potatoes. Moreover, the data of the family labor force involved in the potato production and the value of the family labor force were also collected. The collected data were digitally aggregated, and the outputs were entered into a pre-defined format for evaluation. Moreover, the data were analyzed via Microsoft Excel to get the results.

Among the surveyed townships, Hopon Township had the highest cost per hectare of monsoon potato production, while Hsihseng Township had the lowest cost of cultivation per hectare of the potato. Taking stock of the information received during the survey, low production cost of potato in Hsihseng Township was due to reduction in labor costs, lower land preparation costs, and low use of input (fuel and fertilizer). On the other hand, it was observed that land preparation cost and amount of input used are high in Hopon Township.

According to the results, potato farmers in all surveyed townships received more market price than their individual breakeven price to cover the variable cash costs. It means that current market price of potato in this specific location could cover current variable cash cost of production. In addition, farmers in Kalaw Township obtained the highest return price (different between breakeven price and market price) which is US$ 54/MT higher than its breakeven price. Therefore, from an economic point of view, Kalaw Township was the most profitable area for potato production as compared with the remaining study townships although the standard deviation value of that township was US$ 30/MT between farmers. 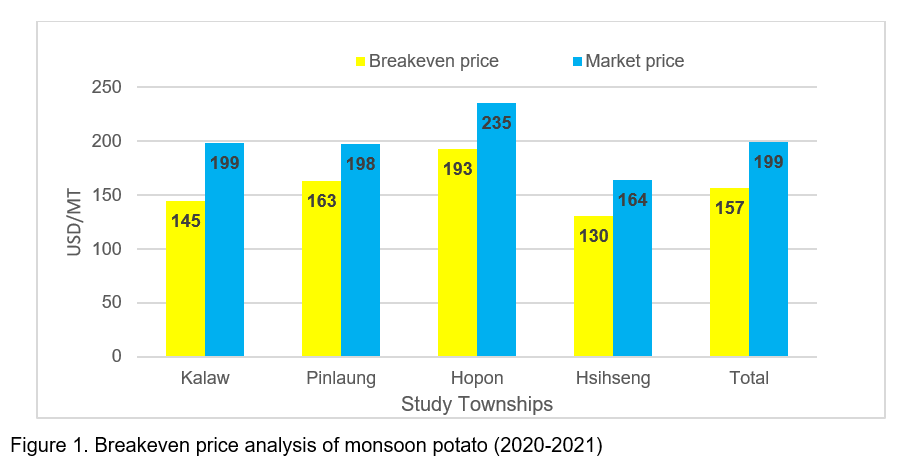 The average breakeven yield of potato in the study area was 13.47 MT/ha which means if the average market price of potato is US$ 199/MT, the farmers in that area must have produced 13.47 MT/ha of potato to cover its cost of production. 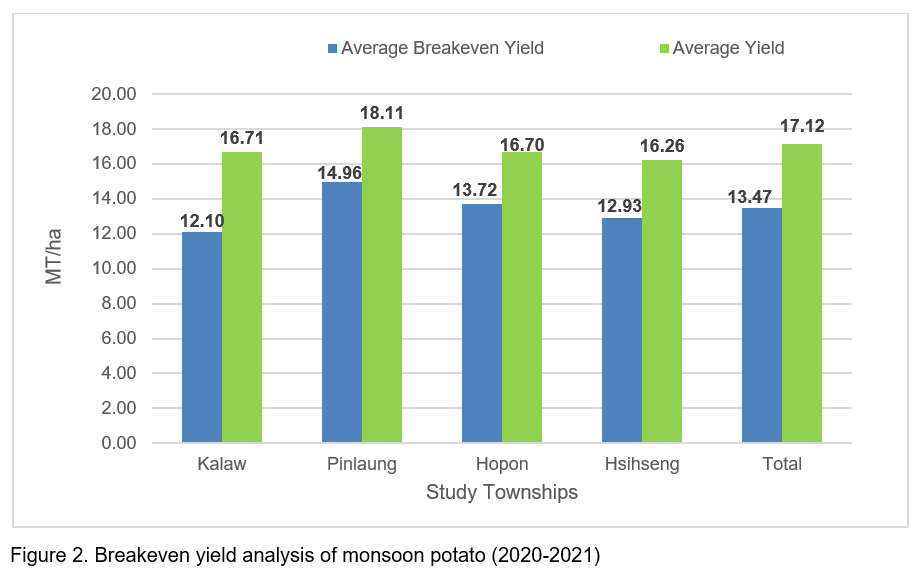 This study was an attempt to describe the production cost and net benefit of farmers who cultivate monsoon potato as a cash crop in four townships, namely, Kalaw, Pinlaung, Hopon and Hsihseng Township, Taunggyi District, Southern Shan State during 2020-2021. The study was analyzed based on the average values. However, there may not be the same cost and benefit from one another because of variable market prices that individual farmers received resulting from the quality of the product, accessibility of market information and communication, storage facilities, unstable of market demand and so on. In addition, it can also be different due to the factors such as transportation costs and post-harvest waste from harvesting to selling period. Consequently, different market prices of potato in a metric ton could change the profitability of potato production at a significant amount. Moreover, the quality of potato and the market price would depend on other factors like selection of potato varieties and post-management practices and that could also affect directly on the market price. The most common challenges in agriculture such as climate change, instability of market demand and selection of varieties have a great impact on the profitability of individual potato farmer so that it is imperative for farmers to choose climate resilient crop varieties and improved varieties for high market demand and good market price.

Because of the geographic conditions in Shan State, potato becomes one of the most profitable cash crops for that region in Myanmar. Therefore, it is still needed to do several researches related to crop cultivation practices, crop production and its quality, market connection and market potential of potato, value chain and supply chain analysis aiming to the development of potato sector in Myanmar.

Learn more
END_OF_DOCUMENT_TOKEN_TO_BE_REPLACED
You are using an outdated browser
For a better experience using this site, please upgrade to a modern web browser.