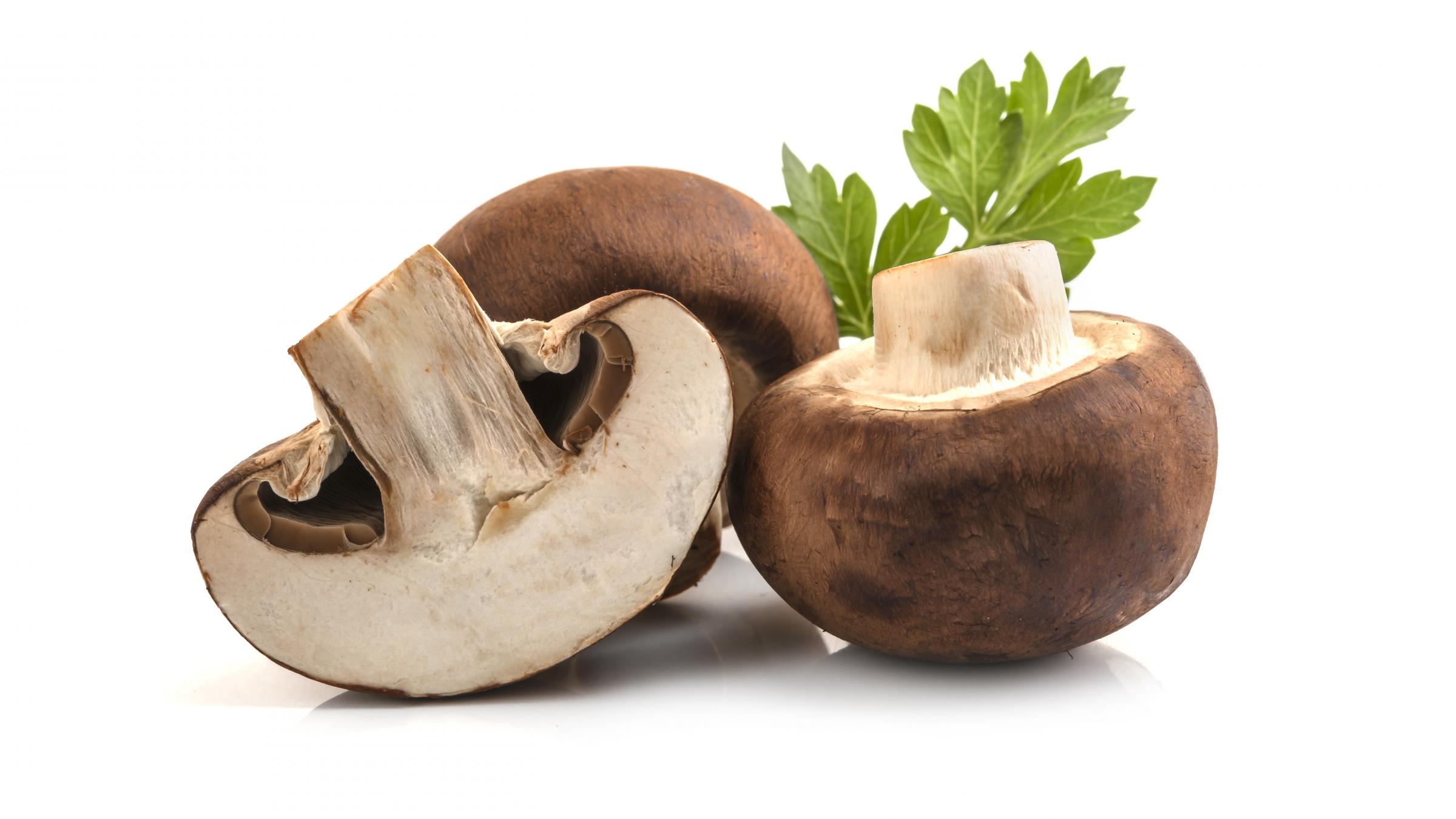 Sawdust is a main ingredient for cultivation of edible mushrooms.  In Taiwan, the annual demand of sawdust for mushroom production has increased to more than 350,000 tons in recent years.  Using sawdust for mushroom production is not only expensive, but is also environmentally unsound.  In recent years, 5,800,000,000 to 6,012,000,000 bags/ bottles were made in mushrooms cultivation (Table 1).  In Taiwan, an estimated 300,000 tons of spent mushroom substrates (SMS) were produced annually and most of them were used as organic compost for growing crops.  However, most of the SMS are nutrient rich and they are of potential for reuse in growing mushrooms.  Most of the SMS contain lignin, cellulose, hemicellulose, or metabolites made from mushrooms.  This topic mainly focuses on the technologies for products made from the SMS.  These technologies are about the researches of SMS re-using and value-adding for mushroom cultivation, vegetable cultivation in facilities, planting organic materials (cultivation medium with organic proved), gardening cultivation vermicompost, breeding of paddy rice and grass blanket, etc.

According to the statistics from the Taichung City Agriculture Bureau, there are about 260,000,000 bags of shiitake mushrooms produced and discarded each year in the Xinshe district, Taichung.  The spent shiitake mushroom substrates (SSMS) are not suitable for plant growth due to high pH and poor aeration.  For vegetable cultivation in the greenhouses, the pH, conductivity (EC) and nitrogen efficiency of substrates are important factors to plant growth.  The media analysis of SSMS, rice hulls and peat moss showed (Table 3) that the pH of SSMS was 8.96, rice hulls and peat moss were nearly 6.0, and EC was 1.07, 1.19 and 0.45 m S cm-1, respectively, with nitrogen efficiency was 151.4, 0, 3.85 mg kg-1.  The pH of SSMS was partial alkaline, could be reduced to pH 6-7 by 2-3 times washing method.  After SSMS are treated, it could be used for growing vegetables and strawberry seedlings in summer, which could improve the additional value of SSMS and reduce the amount of wastes. 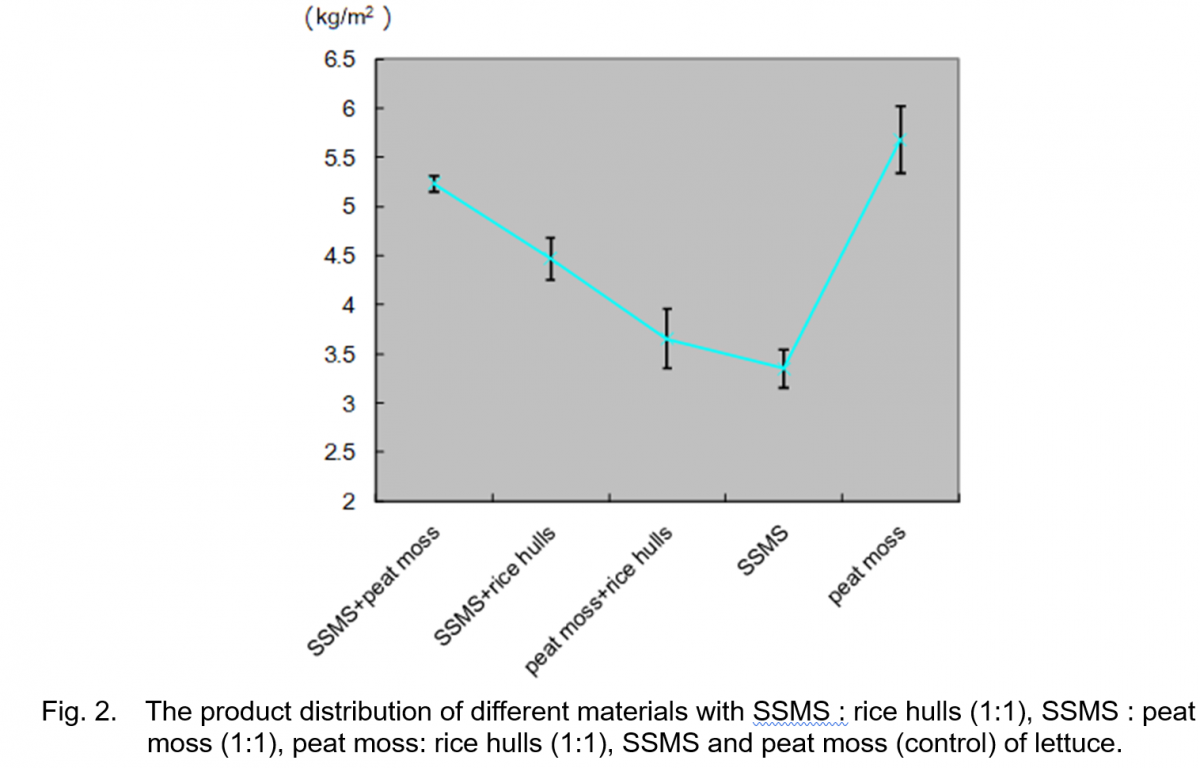 The investigation of the strawberry seedlings (Taoyuan No.1 and Sagahonoka), after breeding about 2 weeks later showed that the weight of fresh leaves and roots of the seedlings harvested from the substrates only containing SSMS and rice hulls at 1:1 ratio (w/w) were better than other test group (Fig. 3 and 4).  The growth of Sagahonoka was less than Taoyuan No. 1.  The Taoyuan No.1 strawberry fruit cultivation results show that the weight of a single fruit, except the treatment of peat moss and rice hulls at 1:1 ratio, could reach more than 95% of that harvested from the treatment only containing peat moss.  The fruit cultivation of Sagahonoka from four test groups and control group were not significantly different.  The results indicated that the re-using of SSMS and rice hulls can reduce the costs of new cultivated materials and reach the goal of recycling of spent materials.  In this way, production costs can be reduced and industrial competitiveness can also be improved. 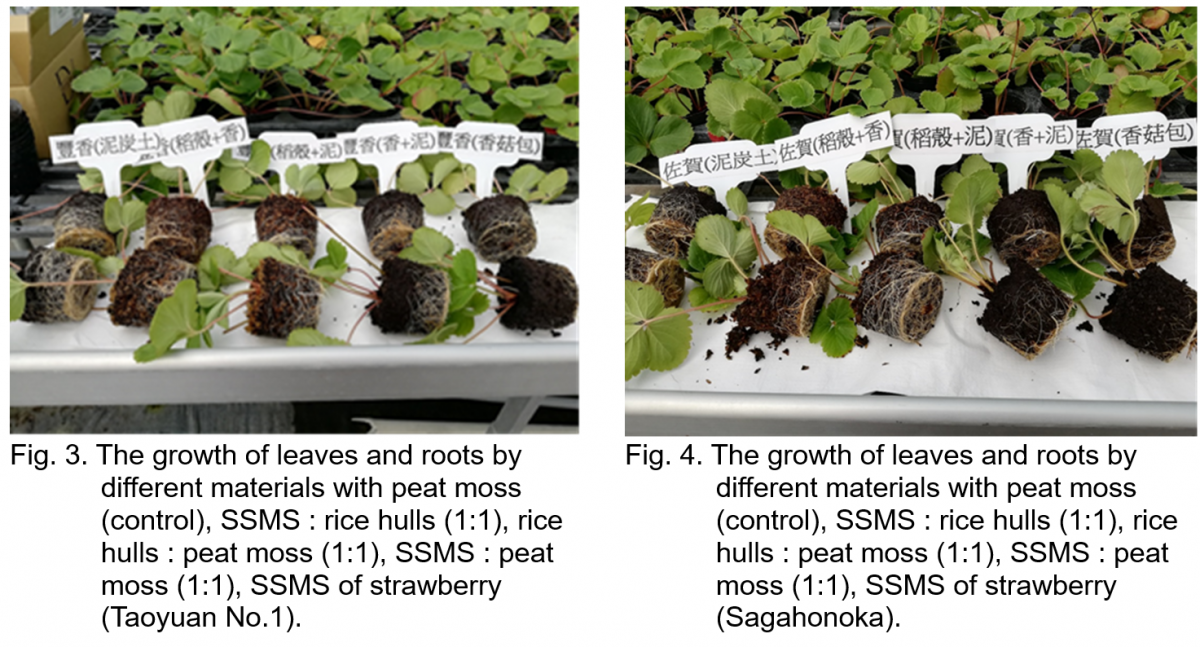 The SMS can be transformed into daily uses, decomposed effectively and quickly by earthworms (Fig. 5), moreover, it could also be beneficial for circular economy.  This technology mainly aims to the products made from the pre-processed SMS with vermicompost process (Arancon et al. 2003; Arancon et al. 2004a; Arancon et al. 2004b; Dominguez, Edwards and Webster 2000; Dominguez and Edwards 2004; Eastman 1999).  This product is a result of planting organic material (cultivation medium with organic proved), which can be applied to gardening cultivation. The practice is considered eco-friendly and economical.  To determine the ability of cabbage cultivation, a variety of SMS were mixed in different proportions for testing.  The results showed that several formulas of cabbage growth are all good enough to become commercial products (Fig. 6).  On the other hand, the SMS can easily be applied to home gardening cultivation. These products energized the surplus materials re-using industries in Taiwan.

Reducing the cost of planting, increasing the utilization of agricultural surplus, and recycling the spent agricultural sources, are the main purposes of this project.  In this experiment, the SMS were composted with other agricultural surplus and their physical and chemical characteristics were analyzed during and after the composting procedure.  The fermentation degree during the composting procedure was also tested by the germination ratio of radish, Chinese cabbage, and lettuce in compost extracts.  After composting, the SMS compost was used to mix paddy rice nursery soil or cultivation medium in different ratios to make different regenerative cultivation medium formulas for rice seedling or grass blanket.

In the rice nursery experiment, both treatments were mixed with soil in different ratios.  The water retention increased, bulk density decreased, and porosity increased when the proportion of treatments A or B increased.  There are no significant differences between different seedling soil formulas on water conductivity.  It also showed survivability of seedlings and plant height increased with the proportion of treatment A or B.  For instance, the plant height of 100 % treatment A and B was 12.1 ± 1.8 and 11.7 ± 1.8 cm, higher than CK (10.0 ± 1.6 cm).  Results showed the transplanting proportion of different formulas were all higher than CK (Fig 7).  It seems treatment A or B can completely substitute rice nursery soil.

In the process of mushroom and animal husbandry residual material treatment, timely addition of Trichoderma fermentative inoculant technology has developed new culture media, biological compost and soil improvement materials (Hendrix et al. 1992).  It can produce agricultural residual material decomposition treatment agent and organic fertilizer to improve resource regeneration cycle and crop yield.  It has improved the disaster mitigation and adaptation capabilities of crops in response to climate change, and have developed products that should be kept warm, moisturized, and maintained to improve the crop's ability to withstand flooding.  Field tests have overcome the effects of extreme weather such as warm winter, low temperature, heavy rain (Table 4), and drought on crop production.  In this experiment, the average mortality rate in the second area of the field investigation and treatment group was only 11.26%, while the average mortality rate in the second area of the investigation control group was 43.14%.

The SMS and acid-resistant probiotics are used to develop deodorant bedding and treatment agents for the animal husbandry.  Chicken house deodorization and antibacterial bedding products can reduce the generation of odors in chicken farms by 80-95% (Table 5).  Combined with deodorant litter and probiotic spraying, it can deodorize and reduce heat barriers in summer.  The survival rate of chickens is more than 95% and the production is increased by 20%.  In addition, the drying time of sawdust chicken manure can be shortened, and compost products of poultry manure can be developed (De Bertoldi et al. 1985; Boguhn, Kluth and Rodehutscord 2006).

The SMS could substitute the fresh sawdust for mushroom cultivation.  It also could be used to cultivate vegetables and strawberries in facilities, used to breed earthworms for vermicomposting, used as a rice nursery soil and cultivation medium.  However, it also depends on the chemical characteristics of the mushroom cultivation medium surplus from different resources and the types of mushrooms.  A production capacity similar to or better than the general production, perhaps can be developed through the recycling of SMS, which can reduce the costs of materials and reach the goal of recycling of spent substrates. Reducing cost may improve agricultural competitiveness.  The development of optimal cultivation conditions can be done by reusing spent agricultural substrates, to promote environmental protection and agricultural sustainability.  The goal of zero agricultural remains can hopefully be attained in the not so far away future.

Dominguez, J., C. A. Edwards, M. Webster. 2000. Vermicomposting of sewage sludge: effects of bulking materials on the growth and reproduction of the earthworm Eisenia andrei. Pedobiologia 44:24–32.

Competitiveness of the Mushroom Industry in Malaysia

Learn more
END_OF_DOCUMENT_TOKEN_TO_BE_REPLACED
You are using an outdated browser
For a better experience using this site, please upgrade to a modern web browser.