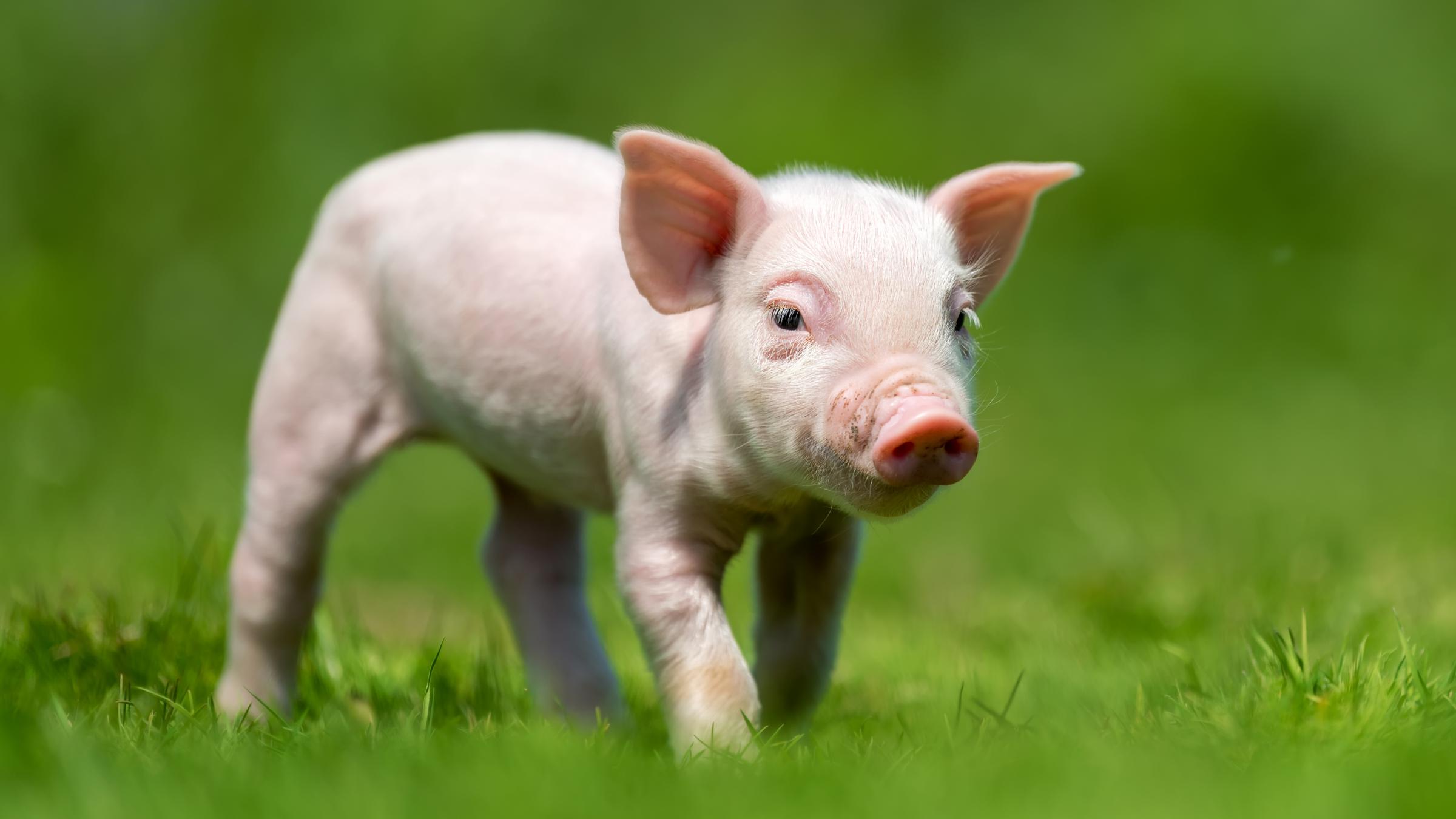 The Chinese government suspended releasing some important data on its pig industry, such as the total number of pigs, for October 2019 and thereafter. As a result, an investigation of the Chinese pig industry became more difficult. However, it is believed that the Chinese pig industry is on its way to a drastic change, following the outbreak of African Swine Fever in August 2018. By collecting and organizing available information, this paper describes the current situation of the Chinese pig industry. The most important finding of this paper is that advanced-type pig farmers, who have an advantage in protecting pigs from African Swine Fever, are now increasing their pork production rapidly by depriving traditional-type pig farmers of their market share. This also affects the feeds market because the main component of feeds for advanced-type pig farmers is corn, while that for traditional-type pig farmers is leftovers from human meals. China’s demands for feed corn are now skyrocketing.

China is the biggest consumer, importer, and producer in the world pork market[1]. One of the biggest concerns in China’s pig industry is the spread of African Swine Fever (ASF). After China’s first case of ASF-infection which appeared in August 2018, ASF has been spreading at an extremely high rate nationwide[2]. Thus, the Chinese pig industry has been attracting increased attention from food business people and researchers worldwide.

There are two types of Chinese pig farmers: traditional type (small-sized) and advanced type (large-sized)[3]. A traditional-type pig farmer grows various crops (and sometimes other livestock, such as chickens, cows, and goats) besides raising pigs on a small farmland and open space around his or her house (pig raising is only a part of their agricultural activities). He or she feeds a small number of pigs mainly on leftovers from people’s meals. Generally, traditional-type farmers are old-fashioned and, therefore, often ignore the Chinese government’s regulations on the shipping of pigs and maintaining hygiene of pigpens.

In order to improve the pig industry and the pork market, the Chinese government promotes advanced-type pig farmers to replace the traditional-type pig farmers. If a pig farm satisfies the following four conditions, it is called a “model pig farm” and receives subsidies from the Chinese government[6]: (1) the total number of sows is 300 or more, (2) the total number of pigs shipped to slaughterhouses in a year is 5,000 or more, (3) the farm is strict in monitoring regulations on pig raising, and (4) there have been no cases of serious pig diseases on the farm in the past two years.

Notes: Within parentheses is percentage to the total.

ASF is a communicable disease among pigs and boars (ASF does not affect human beings). It spreads by oral and nasal infection (ticks can be a vector). The ASF virus persists in pork products, such as sausage and ham. If pigs eat ASF-infected pork products in leftovers from people’s meals, the ASF virus will be transmitted. Thus, the risk of ASF infection is much higher for traditional-type pig farmers than for advanced-type pig farmers.

Once infected, the mortality rate is quite high (almost 100%). The first case of ASF-infection in China was in a pig farm in Liaoning Province on August 3, 2018. Within only nine months, ASF spread to all of the provinces, autonomous districts, and direct-controlled cities in China[7].

The United States Department of Agriculture (USDA) provides its own estimates on China’s pig industry, as shown in Table 3 (USDA does not provide detailed information on methodologies and data sources of these estimates). There, the total number of sows (kept in pig farms) declined by nearly 15 % between 2018 and 2019. This means that many pig farmers gave up raising pigs in 2018, probably because of the outbreak of ASF. Interestingly, in the USDA’s prospect, the Chinese pig industry hit its bottom in 2019 and is now on its way to a sharp recovery.

As mentioned above, the Chinese government became more secretive about the information on the pig industry in October 2019. Nevertheless, we can find data on the average price of pork carcasses and the average price of a sow (at the live pig market), as can be seen in Figures 1 and 2, respectively. As a result of the spread of ASF, traditional-type pig farmers became hastier in shipping pigs (including sows) to slaughterhouses because they feared having their pigs infected by ASF. This pork supply increase should be called a short-term effect because it will die out over time. Simultaneously, the acceleration of shipping pigs (including sows) to slaughterhouses killed the ability of further pig production. Because these two factors canceled each other out, pork carcass prices remained stable until July 2019, as can be seen in Figure 1. However, since then, the carcass price has been at a high level. This means that the abovementioned short-run effect died out around July 2019. This pattern is also observable in Figure 2. While the total number of sows decreased, the price of sows was stable until around July 2019. This is because, based on the spread of ASF, the number of those who quit raising pigs increased, which meant a decline in the demand for sows. This exit effect also died out around July 2019. Since then, the price of sows has been at a high level. 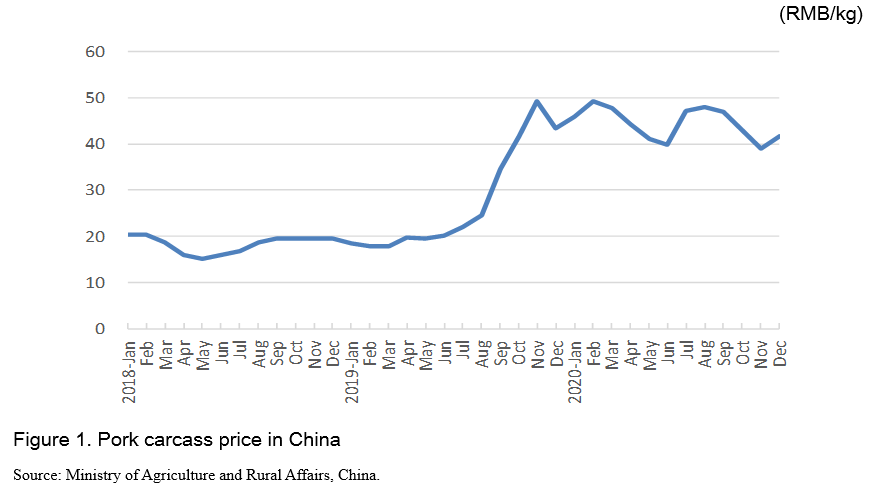 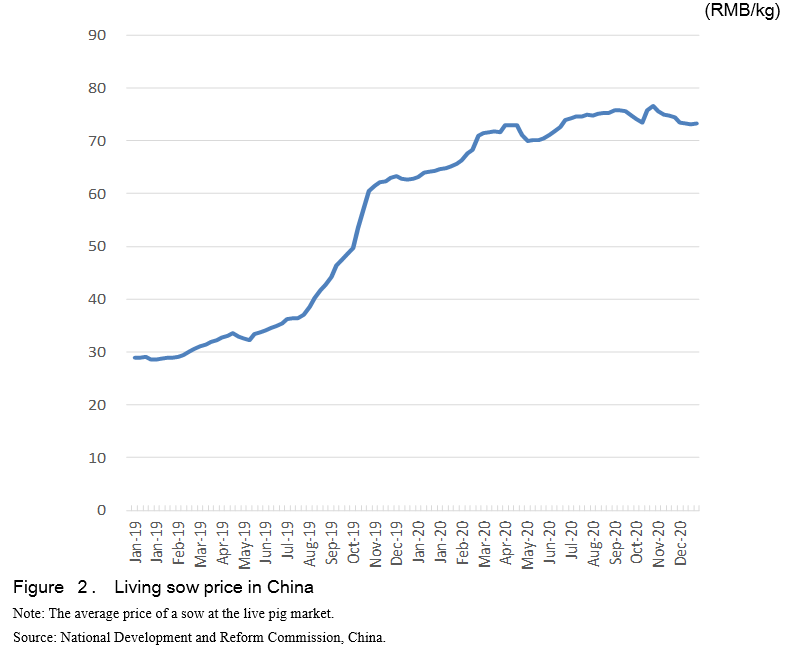 Since the current carcass price is at a high level, our interviews with Chinese business people proved that advanced-type pig farmers’ willingness to increase their production is strong. However, this does not mean their production will increase immediately. It takes nearly eight months from the birth of a female pig to get the first fertilization. As a gestation period, sows need two months to give birth (on average, a sow has 7 piglets per pregnancy). Next, another six months are necessary for fattening before their shipment to slaughterhouses. Even if an advanced-type farmer wants to increase their shipment of pigs to slaughterhouses, it takes at least 16 months to do so.

In addition, there are two more hurdles for increasing pig production. First, in order to minimize the risk of ASF (and other diseases), professional training for workers and installment of special facilities are necessary. Second, the Chinese government’s requirements for environmental protection on pig farms are getting stricter.

The exit of traditional-type pig farmers from pig raising will also continue. Accordingly, it is expected that the carcass price will stay at a high level for a while in spite of advanced-type pig farmers’ strong willingness to increase their production. 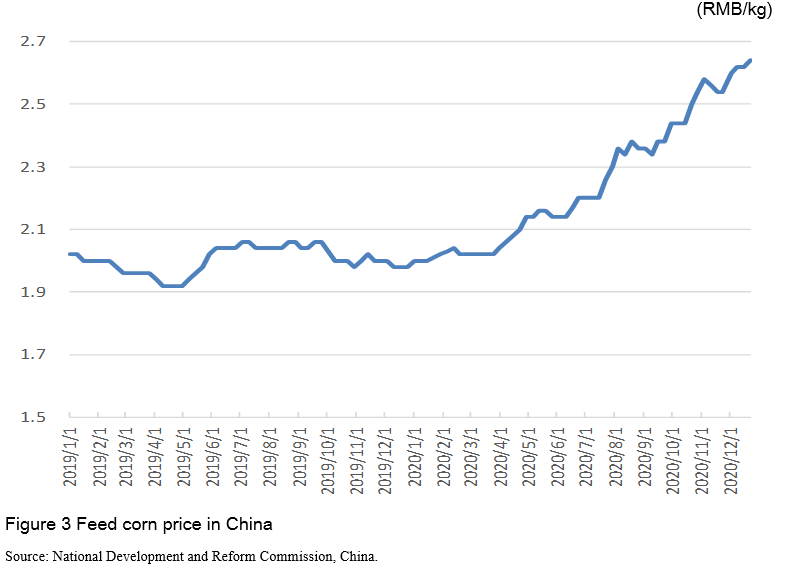 In the long run, the number of pigs in the advanced-type pig farms will keep increasing while that in traditional-type pig farms will keep decreasing. This induces a transition of the type of feeds for pork. Specifically, corn is now taking the place of leftovers from people’s meals as the primary type of feeds. As can be seen in Figure 3, corn prices in the Chinese domestic market started increasing in July 2020 and have continued to increase. 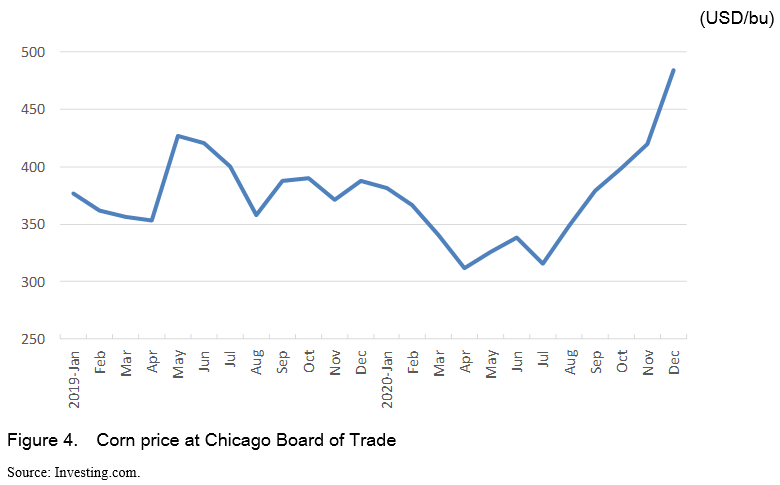 Mihara, W. and M. Isa, “Chugoku no Yoton wo Meguru Doko to Kankyo Kisei Kyoka no Eikyo (The Current Situation of the Chinese Pig Industry and the Impacts of the New Regulations for Environmental Protection),” Chikusan no Joho (Agriculture & Livestock Industries Corporation) April 2018.

[2] Takahashi and Godo (2019) provide details about how ASF spread in China.

[4] For example, every time workers enter pigpens, they have to receive disinfection. Workers’ shoes, apparel, and instruments are also under strict hygiene maintenance

[5] Commercial feeds for pigs contain not only corn but also other crops such as soybeans. However, corn is the most popular as the chief ingredient of feeds for pigs. In fact, the Chinese government uses the ratio between pig carcass price and corn price as one of the most important indicators in policymaking for the pig industry (for example, see https://www.ceicdata.com/zh-hans/china/livestock-breeding-condition/cn-pig-to-feedstuff-ratio). This is why this paper focuses on corn instead of other ingredients for feeds.

[7] On April 23, 2019, ASF-infected pigs were found in Hainan Province, which had been the only ASF-free province in China.

[10] In fact, China has previously presented a similar performance for soybeans. Until 1995, China had been almost self-sustaining in terms of soybeans. However, after the liberalization of soybean imports in 1996, China’s soybean imports increased drastically. In the middle of the 2010s, China’s self-sufficiency in soybeans was around 10 % and China shares nearly 60 % in the world soybean imports. See Shen (2014) and Ministry of Agriculture, Forestry and Fisheries (2016). According to estimates of the Chinese Academy of Agricultural Science, China’s self-sufficiency for corn for 2019 was 99 % (https://finance.sina.com.cn/money/future/agri/2020-06-05/doc-iirczymk539...). However, China is turning to rely on corn imports recently. According to FAS, USDA, China corn imports for 2020/21 (October-September) are estimated to be 17.5 million tons, the second largest after the European Union (https://apps.fas.usda.gov/psdonline/circulars/grain.pdf).

[11] It is alleged that corn prices and wheat prices synchronize at the international market. If so, China’s pig industry would affect the world wheat market too. 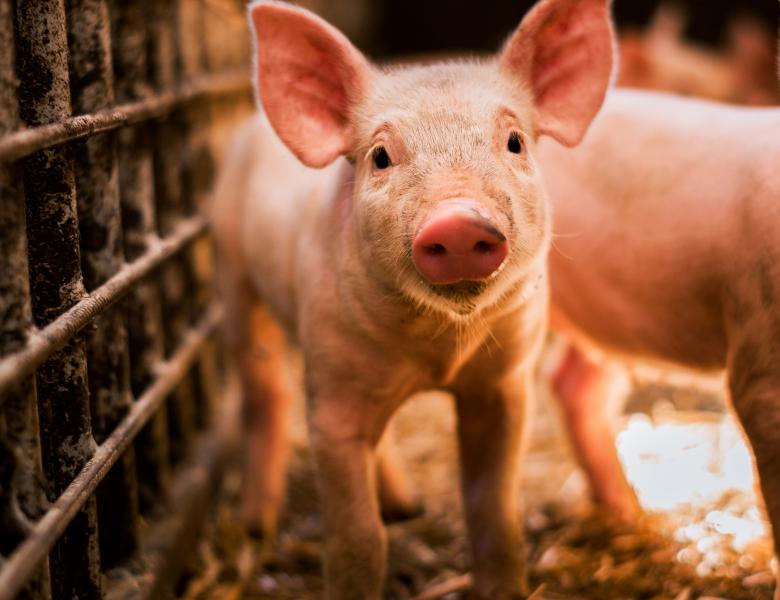 The Experiences of Vietnam in Preventing African Swine Fever

Technical problems on Japan’s pork imports from the US

Learn more
END_OF_DOCUMENT_TOKEN_TO_BE_REPLACED
You are using an outdated browser
For a better experience using this site, please upgrade to a modern web browser.