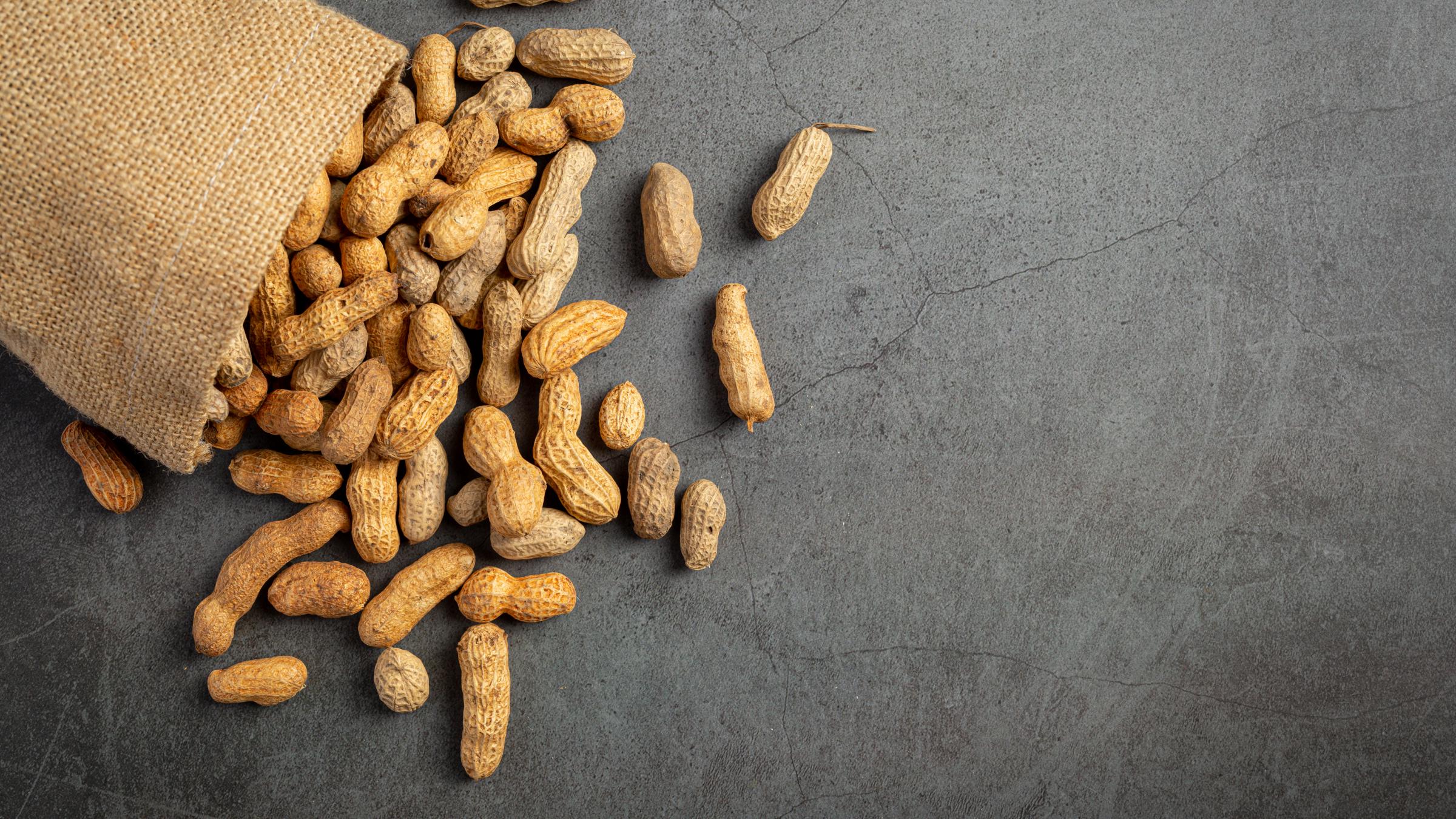 In Myanmar, oilseed crops play a vital role due to high consumption of cooking oil compared to its neighbouring countries. The contribution of oilseed crops also plays a substantial role in Myanmar’s agricultural sector and domestic agricultural product markets as well as in international markets. Fifteen percent of the total crop sown area is covered with oilseeds which include sesame, groundnut, sunflower, mustard, niger etc. In many parts of central Myanmar, oilseeds, particularly sesame and groundnut stand for an important part in ensuring food security and providing cash income for education, health and other social necessities (MOALI, 2017).

Among the oilseed crops, groundnut is one of the most popular edible oil and protein producing crops in the world. Most of the groundnuts grown in the world are used to produce oil, groundnut butter, confectionaries, roasted groundnuts and snack products, extenders in meat product formulations, soups and desserts. Groundnut is directly consumed as raw nut or in processed form based on the different value chains (Dhanesh & Kochhar, 2015).

This study interviewed sample groundnut farmers during the period from November to December, 2018. Both primary and secondary sources of data were used in this study. As the primary data, a total 150 farm households were selected by using purposive random sampling technique and were interviewed with a structured questionnaires. Secondary data were taken from the published papers, official records, and other related theses from Ministry of Agriculture, Livestock and Irrigation (MOALI), Department of Agriculture (DOA) and Yezin Agricultural University (YAU) library.

In this calculation, the smallest benefit cost ratio (BCR) of pod was 1.0. It indicated that the return per unit equal to return above variable cost of pod, because it was sold as a raw product without transaction to value added product and lower yield in the study period than other period. The largest BCR was 1.97 from selling as seed. It pointed out that return per unit capital invested was 0.97 after all. So, seed production was economical for sample groundnut farmers. 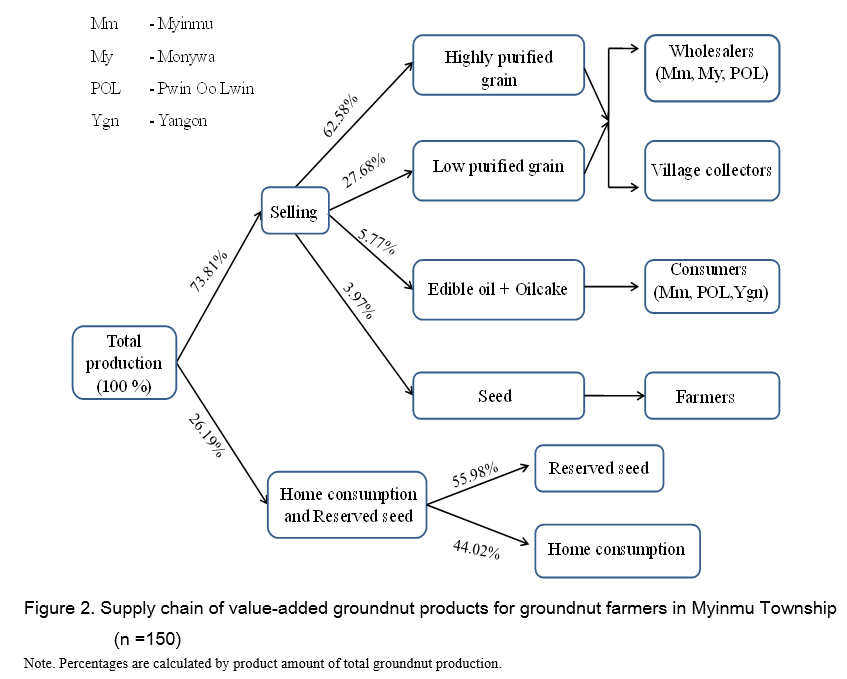 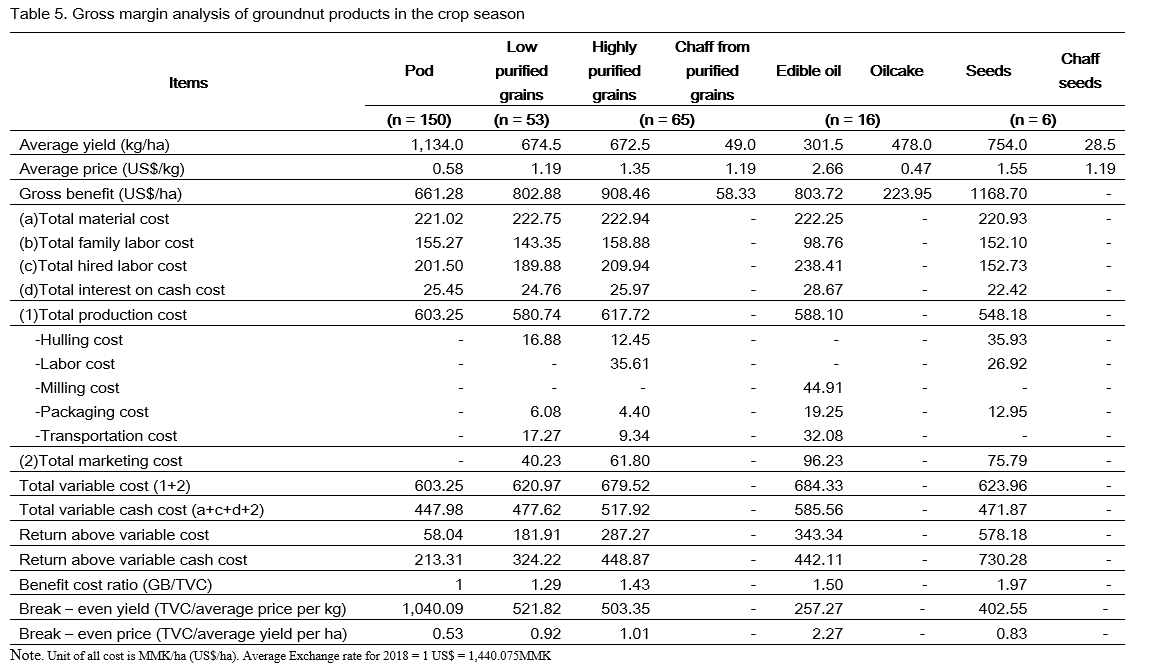 The services of various agencies constituting in a supply chain are remunerated out of the marketing “margin”. This term is used to denote the difference between the price paid to the first seller and that paid by the final buyer (Kohls, 2002). Trends in commodity prices and domestic marketing margins are important indicators of market performances. In this section the marketing margins of groundnut was examined.

In the marketing channel, the commodity types handled by the middlemen were different. For example, the wholesalers handled the commodity as the groundnut seeds and the consumers handled the commodity as edible oil and oilcake, and seed. Groundnut seeds were differentiated into two types such as highly purified grains and low purified grains. Therefore, the percentage of profit per cost price was used to analyze the specific groundnut products of sample farmers were presented in Table 6. 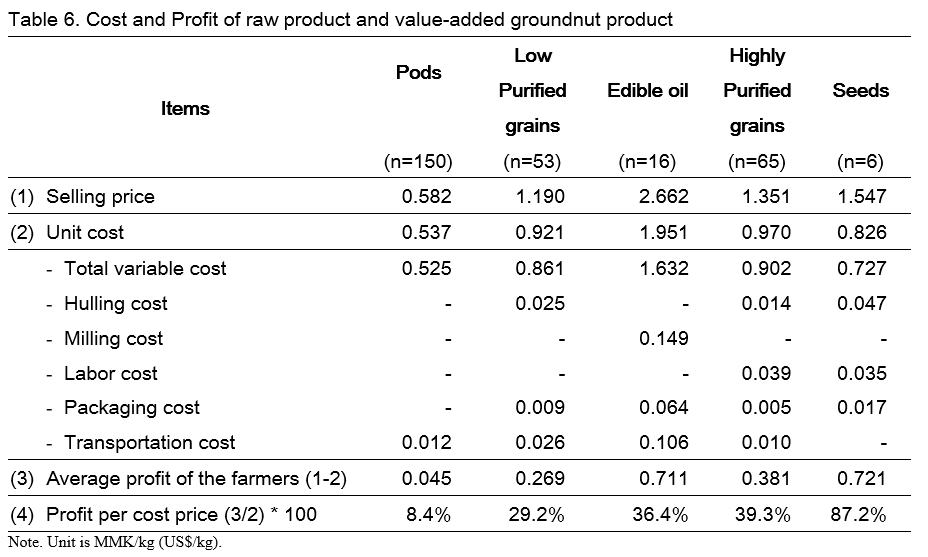 This study attempted to identify the marketing margin of value-added products of groundnut farmers in Myinmu Township. In the study area, value-added processing opportunities were found in sample groundnut farmers with the products of low purified grains, highly purified grains, edible oil and oilcake, and seeds. Particularly, sample farmers did not sell their products as raw products (pods). Moreover, in total production of groundnut, the marketed surplus was larger than the reserved seeds for sowing in next season and home consumption in the study area. As a result, majority of sample farmers sold their products after keeping a required amount of reserved seeds and home consumption.

According to the cost and return analysis, total variable cost of highly purified grains was higher than other groundnut products during the crop season. Additionally, gross benefit of seeds was higher than others due to the higher price received. The benefit cost ratio of pods, low purified grains and highly purified grains were 1.0, 1.29 and 1.43. And, the benefit cost ratio of edible oil and seeds were 1.50 and 1.97. Among them, the BCR of seeds was the highest (1.97) and resulted in 0.97 returns per unit capital invested. This means that farmers can earn profit about one unit from groundnut production if US$ 1.0 invested on variable cash cost. Therefore, net return for capital invested was US$ 0.97. Therefore, the results showed that seed production was economically more attractive for farmers than other groundnut products during the study period.

As the result of the marketing costs and marketing margin analysis of the raw product (pod), and value- added groundnut products, seeds obtained the highest percent of profit per cost price (87.2%), much higher than that of selling of low purified grains (29.2%), edible oil (36.4%), and highly purified grains (39.3%). Therefore, groundnut farmers should consider creating value-added products of groundnuts instead of selling their raw products to earn more profit. This study pointed out that seeds as well as highly purified grains, and edible oil and oilcake were more profitable value-added groundnut products in the study area.

MOALI. (2017). Myanmar Agriculture at a glance, Department of Planning. Ministry of Agriculture, Livestock and Irrigation, Myanmar.

Learn more
END_OF_DOCUMENT_TOKEN_TO_BE_REPLACED
You are using an outdated browser
For a better experience using this site, please upgrade to a modern web browser.