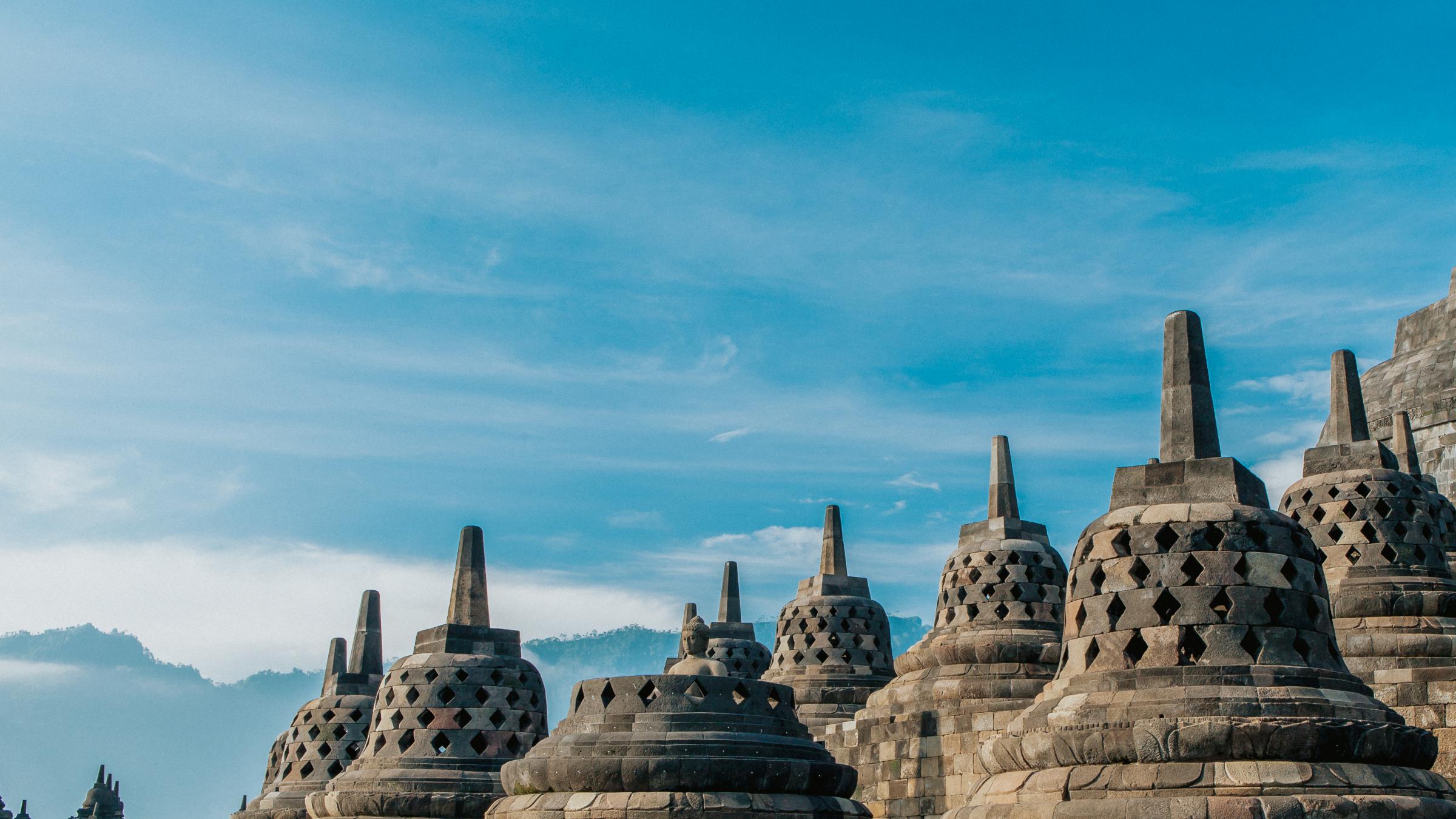 It is believed that labor as human activity provides good/service(s) plays a central role in the growth of the economy, particularly as the supplier of input into production. Hence, the sustainability of labor is becoming and will continue to be a critical issue globally. In the case of Indonesia, according to the Law Number 13/2003 on Labor (GoI, 2003), it is defined that labor is every individual or person who is able to work in order to produce goods and/or services either to fulfill individual or societal needs. Consequently, there is a need to develop the quality as well as protection of labor in respect to human dignity and values. As an integral part of the national development, labor is developed through carrying out the framework of building up fully integrated human beings of society. It is aimed at creating a prosperous substance of which material and spiritual benefits are evenly distributed.

Labor development has many dimensions and interconnectivity. It is not only related to the interests within before, during, and after the term of employment but also associated with the concerns of the entrepreneur, government, and public. Consequently, comprehensive and all-inclusive arrangements of labor are essential. It includes, among others, the development of human resources, the improvement of productivity and competitiveness, the extension of job opportunities, the provision of job placement service, and the development of related industries.

This article discusses the Indonesian labor, focusing on agricultural labor. It comprises the overview, issue, and challenges towards policy development in the country. 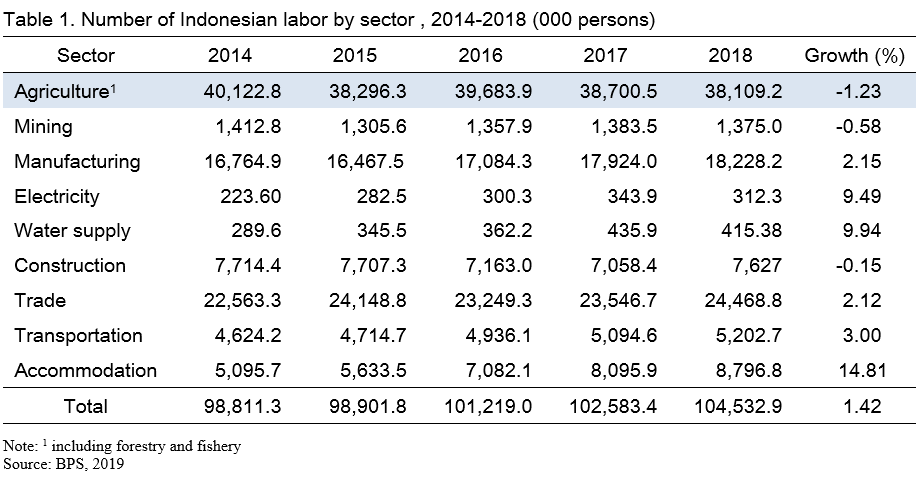 OVERVIEW OF AGRICULTURAL LABOR IN INDONESIA

The Indonesian labor in agricultural sector consists of labor in food crops, horticulture, estate crops, and livestock sub-sectors. It can be viewed at least based on its performance such as number, gender, age, education, and productivity, as presented in the following paragraphs.

The majority (60.36%) of agricultural labor in Indonesia is male (Table 3). It can be seen that the food crops sub-sector was the highest growth, particularly female labor. This was a good condition to support food security in particular. Meanwhile, the growth of horticulture labor was quite positive since there were some opportunities to develop this sub-sector with marketable commodities. 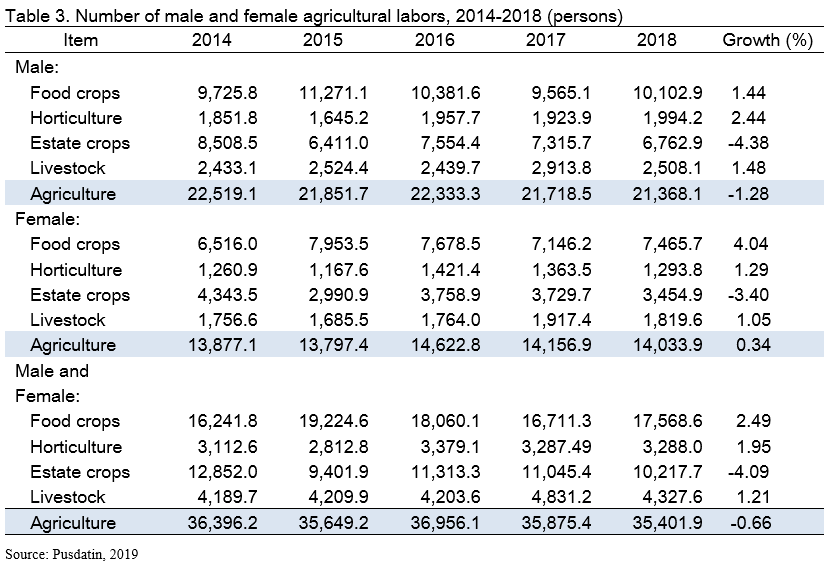 The highest proportion of agricultural labor was who were at the age of 25-56 years old (71.21%) as categorized as prime age group (Figure 1). It was noted that the proportion of old age group (>60 years of age) was respectively quite higher than that of young age group (15-24 years old), namely 17.99% vs. 10.80%. The highest proportion of old labor was in livestock sub-sector since it was frequently operated by senior farmer who raise ruminants (cattle and goat). However, the extent of participation of young labor in the sub-sectors of livestock and food crops was higher as compared to other sub-sectors. It is indicated that livestock and food crops still the largest sub-sectors involved by the youth. 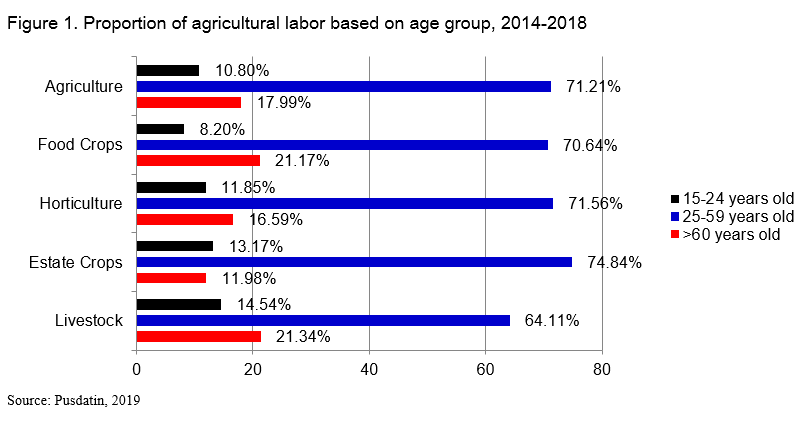 Above 80% of agricultural labor attained basic education (elementary and junior high schools), followed by attaining middle education (senior high school) as shown in Figure 2. Despite the attained high education (college and university) were few in number, the growth rate was quite positive (Table 5). It is one of the opportunities to improve agricultural development in the country. 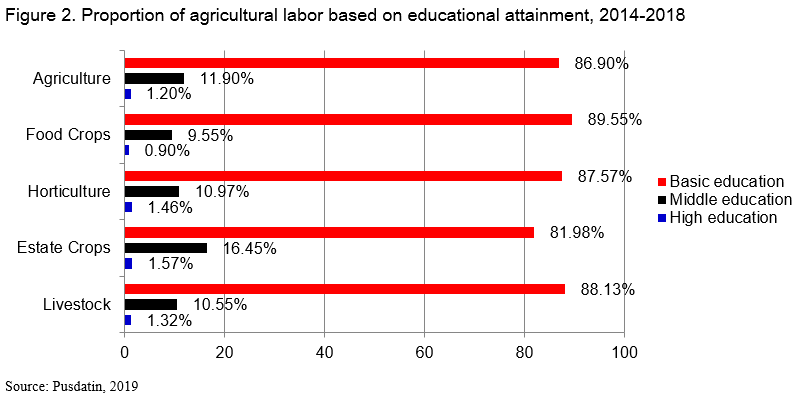 The productivity of agricultural labor in Indonesia is shown in Table 6. During 2011 to 2017, the labor productivity in this sector (IDR29.48 million or USD 2,452.40, on average) remains the lowest of all sectors in absolute terms. However, the growth (6.09% annually) was quite positive as compared to other sectors particularly mining and quarrying; electricity, gas and clean water; as well as finance, rental, and services. 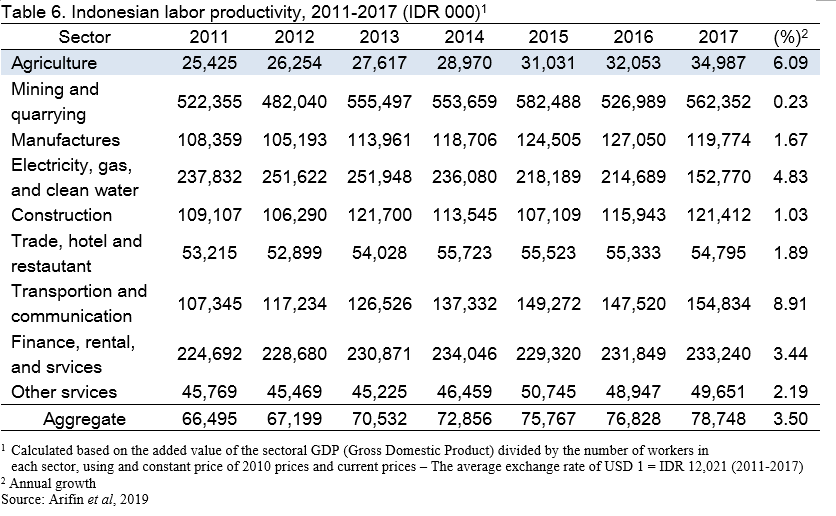 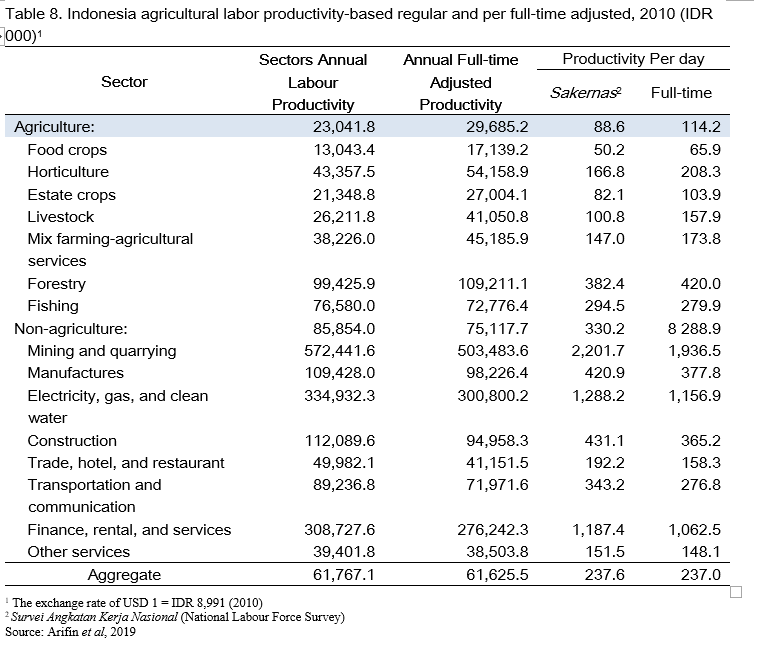 Based on the previous discussion, there are three prominent problems and challenges of agricultural labor in Indonesia. They are: (1) The existence of small-scale farmers; (2) The presence of young farmers; and (3) The characteristic of labor productivity.

Indeed, agricultural labor productivity is critical for the welfare of the rural population and for long term economic growth and structural change. According to Arifin et al (2019): “….. In the process of economic structural transformation, countries generally experience a significant contraction in the share of employment in primary agriculture as growth rates diverge between agriculture, industry and services, as agricultural production consolidates into somewhat larger and often more mechanized units, and as surplus underemployed agricultural labor is absorbed in other segments of the economy. Moreover, other segments of the economy have been slow to absorb surplus agricultural labor, resulting in significant levels of seasonal or other underemployment of people in rural areas. Lack of demographic pressures, small farm sizes, topographical challenges and other factors have contributed to very low rates of mechanization in Indonesian agriculture”.

To overcome the problem and challenges of Indonesian agricultural labor, it is necessary to implement economic transformation with unburdened economy in order to enhance the role of small-scale farmers and young farmers towards improving labor productivity in agriculture. This can be implemented through introducing good agricultural practices, improving capacity, developing integrated agriculture, strengthening institution, providing insurance, and assuring market.

The implementation of small-scale farmer development is collectively through the organization of farmer groups. It should be noted that the development activities must pay attention to the substance of their status (owners and tenants) as well as the identity status in order to facilitate the identification and accuracy of the implementation of development programs. Above all, the allocation of village funds program is one of opportunities that can be organized to develop the small-scale farmers in Indonesia.

In general, young people do not have the preference to work in agricultural sector. They are more likely to choose to work in non-agricultural sectors. Therefore, the youth can be attracted to agriculture if: (1) Agriculture would earn enough for them to raise a family, (2) They are provided basic resources such as land, capital, training, farm equipment and market, and (3) They are able to see the meaning and significance in their work (White, 2015).

In fact, the Indonesian Ministry of Agriculture has issued the Minister Regulation Number 33/2017 on the Development of Young Farmers in Joint Business. It is aimed at: (1) Increasing the role of youth supporting the priority programs; (2) Developing the institutional economic managed by the youth towards increasing competiveness and its bargaining position; and (3) Guiding the youth with oriented agribusiness activities. So far, the implementation of this program has not significantly achieved. Therefore, the Ministry of Agriculture issues another supporting program namely Petani Masuk Sekolah (Farmers Entering School) through introducing agricultural education curriculum at school.

Above all, there is a need to provide financial incentive in the form of facilitating the accessibility to capital and land tenure anchored in smallholder characteristics for the young farmers. Hence, it is required to implement business diversification based-integrated rural industrial development supporting by specific program such as village funds. The youth is the future of the nation, and the rural youth is the future of agriculture and rural industry.

As an integral part of agriculture, labor plays an important role in the development of this sector towards Indonesia economy. Since there is a tendency of the absence of attractive employment opportunities in agricultural sector, it would potentially drive brain drain due to large number of small-scale farmers, lack of interest of young generation, and low labor productivity. Consequently, the development of agricultural labor is indispensable. This is not only limited to value and capacity development but also includes sufficiency of labor by maintaining its retention with adequate improvement.

The development policy of agricultural labor in Indonesia can be implemented through paying attention to small-scale farmers, attracting young generation, and improving labor productivity. On the one hand, it is carried out by improving the quality of human capital, providing better infrastructure and facilities, allocating adequate development budget, and maintaining the stability of the macro-economy. Thus, it may create conducive conditions to encourage capital accumulation through investment activities. On the other hand, the development program is critical to alter the mind-set that agriculture is a marginal sector in which it could be a prevalent and prosperous activity using Information and Communication Technologies (ICTs).

In terms of regulatory measures, there are at least two areas which need to be developed for future agenda, namely: (1) regulation on the minimum wage for agricultural labor, as has been applied in other sectors of the economy; (2) pension policy for both labor and farmer as has been implemented in developed countries. 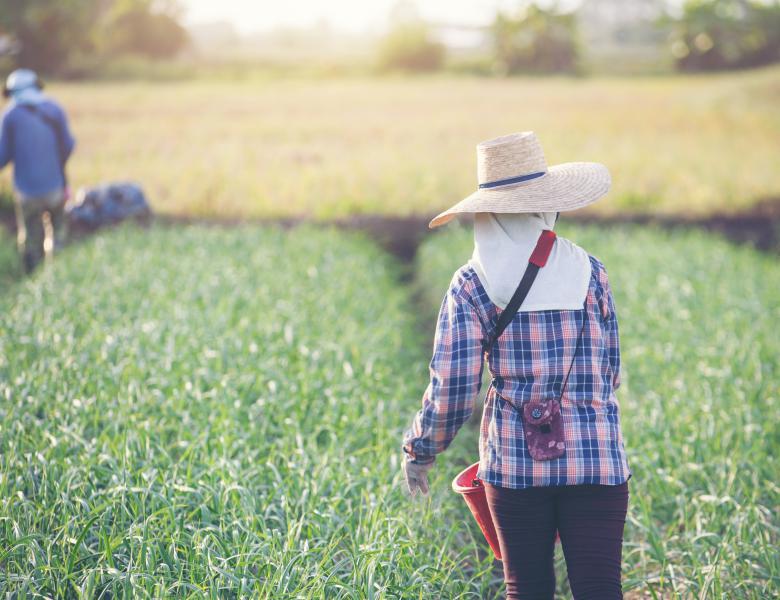 The Agricultural Labor Force in Japan

Transfer of Rural Labor Force to Other Sectors in China

Recent Rural Labor Force Policy and its Implementation in China

Learn more
END_OF_DOCUMENT_TOKEN_TO_BE_REPLACED
You are using an outdated browser
For a better experience using this site, please upgrade to a modern web browser.