Biodiversity conservation is susceptible to how land is used agriculturally, and environmentally friendly agricultural activities are a crucial method of maintaining the functions of the ecosystem. As the public begins to pay more attention to food safety and the environmental friendliness of agricultural operations, organic farming has become increasingly popular. Most agricultural activities have a certain effect on the environment and biodiversity (Kleijn, 2006), and positive changes to agricultural operations can protect the health of agroecosystems. Hole et al. (2005) collected and reviewed nearly 100 research articles that compared the effects of organic farming methods and conventional farming methods on maintaining biodiversity. More than two-thirds of the studies of organism communities (such as vertebrates, arthropods, annelids, plants, and microorganisms) have demonstrated that organic farming methods lead to higher biodiversity and number of species (including parasites and predators) than do conventional farming methods (Fan et al., 2013; Bianchi et al., 2013). High biodiversity regulates the effects of farmland pests on farmlandsand is thus crucial to farmers; such regulation is known as the regulating services (one type of ecosystem services). Pest regulation is influenced by factors such as farming methods, surrounding environment, and surrounding landscape. Recent studies have demonstrated that heterogeneity in the landscape of large-scale farmlands has a strong effect on farmland biodiversity (Benton et al., 2003; Wilby et al., 2006).

Recent studies have focused on how the number of flowering plants around farmlands can be increased to provide parasites with alternative food sources, ensuring stability of the natural predators and strengthening biological control. This method is referred to as ecological engineering, habitat manipulation, or farms aping. Rice paddies are generally farmed in large scale. Thus, diversifying the vegetation surrounding rice paddies is critical to the health of the agroecosystem. According to studies conducted worldwide, an increase in the number of honey plants around rice paddies can increase the rice paddy biodiversity, especially the number of predators, parasitoids, and neutral species. Biodiversity is crucial to ecosystem pest control (Lin, 2017; Gurr. et al., 2016). Zhu et al. (2015) discovered that by growing sesame flowers around rice paddies, the nectar of the sesame flowers increased the lifespan and reproductive rate of three types of parasitic wasps, indirectly affecting the effectiveness of pest control. This shows that the degree of landscape vegetation diversity around farmlands affects the farmlands’ biodiversity and pest control. Because pollen and nectar are sources of nutrients for most beneficial predatory insects to attain maturity, an appropriate number of flowering plants will attract these insects, subsequently improving the ecosystem services (Kopta et al., 2012) and reducing the cost and labor required to implement other pest control measures. Accordingly, the cultivation of flowering plants has become a method with which organic farms can sustainably manage pests.

The agricultural industry is transitioning from being oriented toward yield to being oriented toward a diverse value model (Enoki et al., 2014). The types of value that the industry can provide include production, regulation, support, and culture-based ecosystem services (Daily, 1997). Farmlands offer ecosystem services such as reducing the urban heat island effect, preventing floods, maintaining groundwater levels, and decreasing soil salinity (Chen, 2013), and protecting farmland biodiversity can maintain such ecosystem services. Farmers previously used pesticides to kill pests. However, pests have become resistant to pesticides, and the public have become concerned with environmental protection and food safety. Reducing pesticide use, engaging in environmentally friendly and greening endeavors, and avoiding cement use to increase the numbers of pest predators may thus be a favorable alternative. Additionally, these methods reduce the amount of money that farmers must spend on pesticides and produce safer food. For local residents, maintaining biodiversity enables them to experience the rich ecology of the past, and experience camps and other activities can be held to increase the revenue of farmers or local residents. Ecological and organic farming have thus become a recent trend.

Rice paddies account for one-third of Taiwan’s total farming land, and rice is the staple food of the Taiwanese people. Thus, when pursuing sustainable agricultural development, balancing biodiversity conservation with greater agricultural production is necessary (Butler et al., 2007). New agricultural policies should be developed, new farming methods evaluated, and the effects of different farming methods on local agroecosystems determined. When attempting to inhibit pests and diseases, the use of conventional methods such as chemical pesticides may cause the death of non-pest invertebrates sensitive to pesticides and cause species recolonization to take longer because of pest residue, the latter of which alters the community of invertebrates on rice (Geiger et al., 2010). Accordingly, the present study investigated farmlands cultivated using different farming methods and the landscapes surrounding this farmland, analyzing differences in the structure of invertebrate communities and biodiversity in rice paddies.

Conventional rice paddies, in which pests were controlled using chemicals, contained fewer animal species for each ecological functional group than organic rice paddies did. Although the number of pests in the conventional rice paddies was controlled, these paddies housed more Diptera species such as Chironomidae and Sepedon, which are highly resistant to pollution. Although these animal species do not directly feed on rice or crops, they feed on organic debris and algae and inhabit semiaqueous environments such as farmland and irrigation canals when they are still in the larval stage; they likely change the rice paddy environment. Conventional rice paddies had fewer pest predators (both in number and variety) than organic rice paddies did. Thus, if the dominant pest species change, such as being replaced by those highly resistant to chemicals, the number of pest predators might not increase quickly enough, resulting in economic and agricultural losses (Fan et al., 2013).

able 1.  The numbers of species and relative abundance of each ecological function groups in organic and conventional fields.

z numbers of species of each ecological function in treatments

y relative abundance of each ecological function groups in treatments

In 2017, a survey was conducted in the composition of arthropod species in its shallow mountain and coastal areas in Hualien (Figure. 2); a total of 177 species of arthropods were identified in the land regions, with 130 identified in Dewu, and 127 in Sinshe. The arthropods were categorized according to their functional feeding groups. The results revealed that except for predators, Sinshe possessed more animal species in all functional groups (Figure. 2a) and a greater number of detritivores than did Dewu (Figure. 2b).

A total of 54 species of arthropods were identified in the coastal areas, with 48 and 32 species identified in Dewu and Sinshe, respectively. The arthropods were also categorized according to their functional feeding groups, and the variety and number of arthropod species are illustrated in Fig. 4. The Sinshe rice paddies had higher percentages of collector species (Figure. 4), and more than 90% of the species were constituted by filtering collectors or shredders. In Sinshe conventional rice paddies, filtering collectors accounted for 67.4% of all collector individuals, substantially higher than in other rice paddies farmed using other methods. Rice paddies of all types in Sinshe exhibited high varieties of filtering collectors and shredders. Compared with Sinshe, Dewu had more species in all functional groups except for shredders. 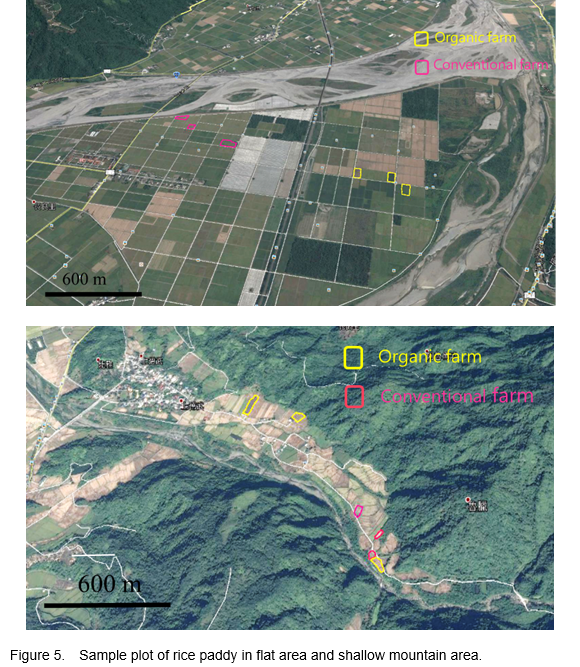 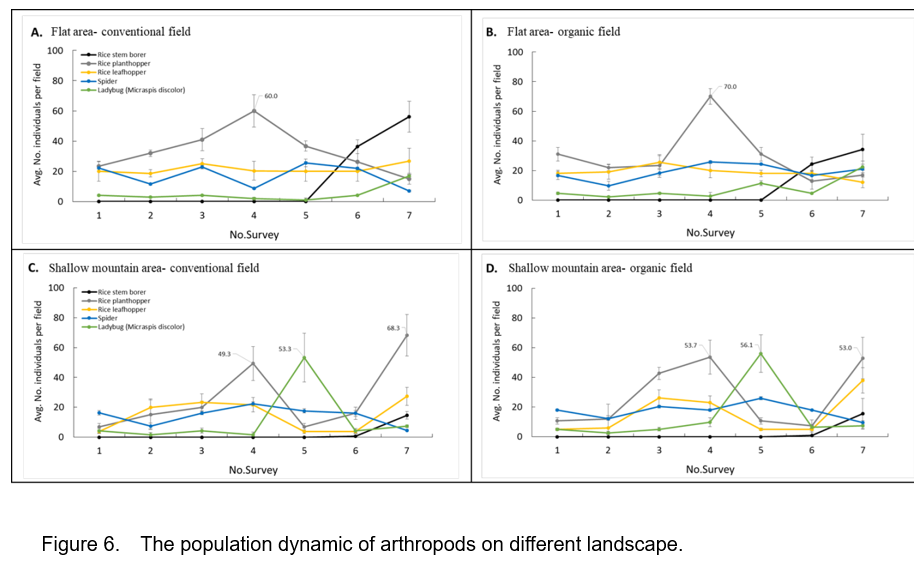 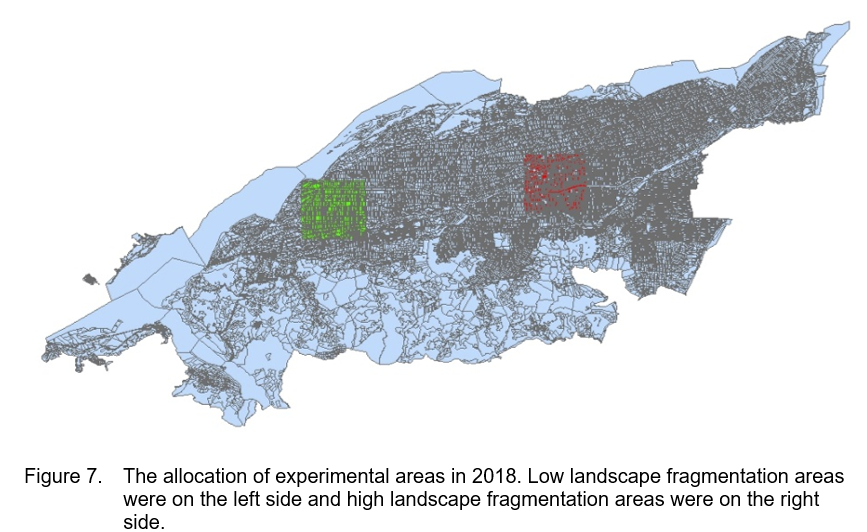 Table 2.  Effects of organic and landscape fragmentation factors on arthropods community in paddies in 2018.

Rice paddies play a crucial role in Taiwan’s wetland ecology. Different farming methods and the landscapes surrounding rice paddies affect the ecosystem composition of these paddies. Recent surveys have discovered that compared with organic rice paddies, conventional rice paddies, which are subjected to long-term chemical pesticide spraying, contain fewer numbers of animal species for every ecological function group, resulting in a less balanced ecological composition. When the climate conditions are suitable for pest growth, the farmers are forced to rely on pesticides because the number of pest predators does not necessarily grow with pests. Additionally, herbicides, a commonly used type of agricultural chemicals, exterminate ridge grass and flowers, which pest predators live and feed on. The more heterogeneous are the large environments that surround rice paddies, the more biodiverse are the rice paddies, and the more stable is the rice paddy growth. Such rice paddies are less prone to losses caused by pests because the various surrounding habitats provider for predators from a wide variety of functional groups. Therefore, agricultural producers should consider the environment surrounding farmlands, and various types of artificial vegetation and water habitats should be created whenever necessary to maintain favorable environments for rice paddies and improve the ability of the paddies to recover from pests. 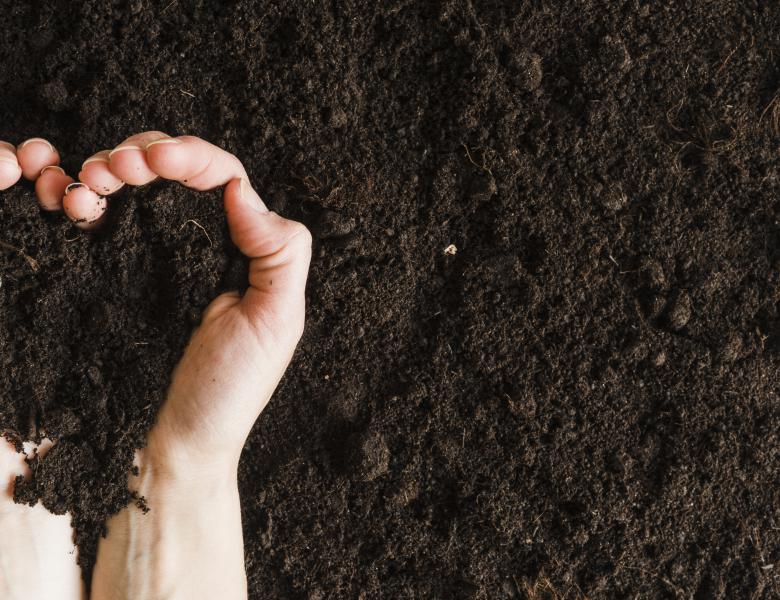 Our Food Our Future: Revitalizing the Ecosystem in Malaysia*

Revitalising the Ecosystem for Food Sovereignity

Learn more
END_OF_DOCUMENT_TOKEN_TO_BE_REPLACED
You are using an outdated browser
For a better experience using this site, please upgrade to a modern web browser.