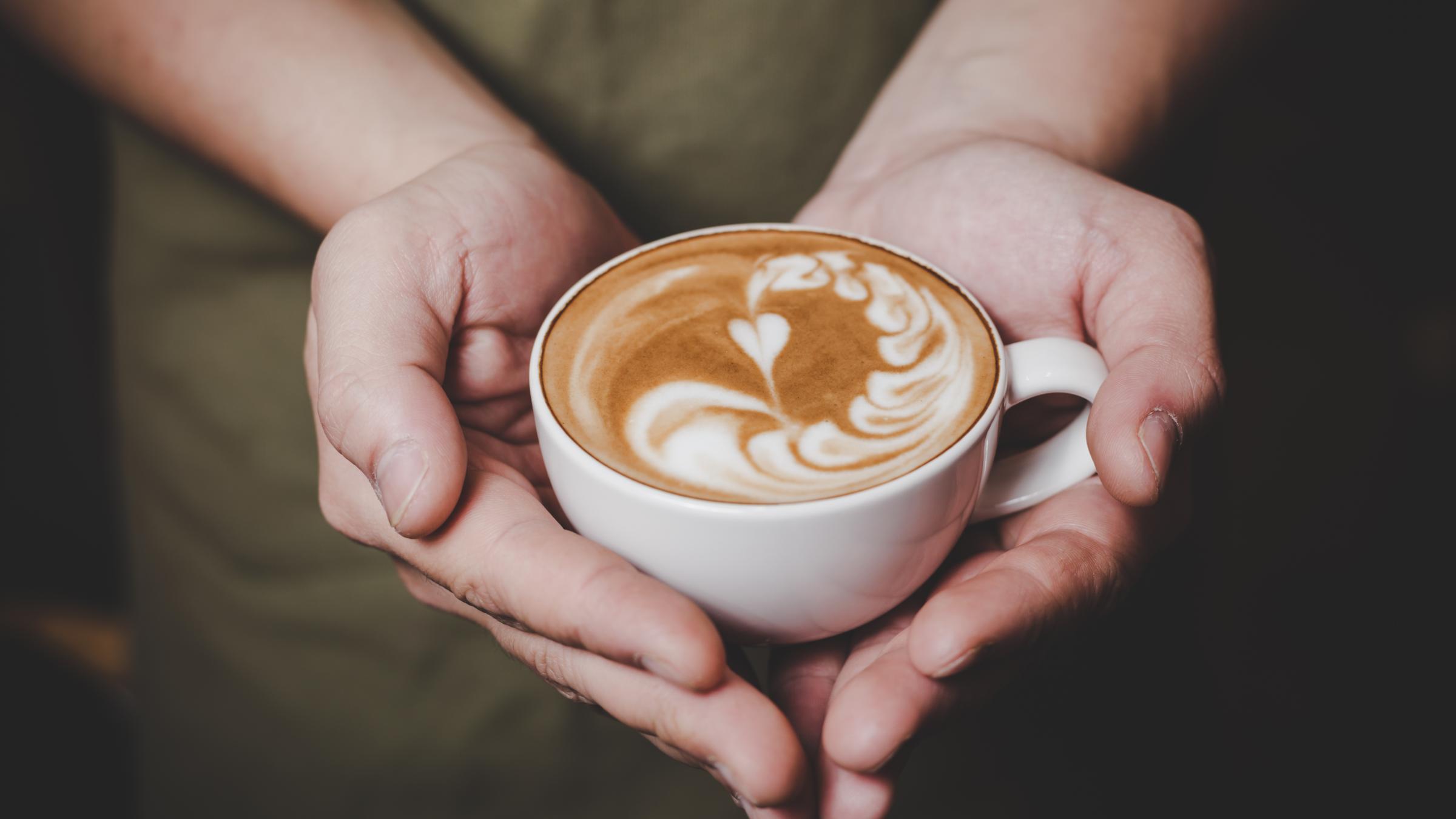 Is Lao Coffee Sector at Its Crossroad? An Analysis of Coffee Market and Coffee Producers

Coffee plantation has contributed to the economic development of Laos over the past three decades. Coffee is one of the most famous agricultural exports of Laos, particularly the product from Bolaven Plateau in the country’s southern part. The widespread of coffee plantation has gradually emerged in the mountainous areas of the north as well. Although there is a high demand of coffee, but Lao coffee production is facing many challenges. In recent years, coffee production in Laos is threatened by cassava plantation intervention, market obstruction, labor insufficiency, and climate change. It is suggested that the government should evaluate its zoning mechanism to strengthen coffee plantation and restrict crop boom that causes vulnerable soil. In addition, raising climate change awareness is essential to help local producers adapt and improve their production. Lao coffee sector development should be paralleled with other potential crops that offer more gains and less negative effect, particularly soil deterioration.

Coffee plantation is the prior agricultural production of Lao PDR (hereafter referred to as Laos). Harvested areas have been expanded over the past three decades from 20,000 hectares in 1990 to 88,000 hectares in 2020, which is the fourth crop after rice, cassava, other crop plantation areas (FAO, 2022). More than 80% of coffee plantation is located in the southern part of Laos, particularly the Bolaven Plateau. It is expected to generate more income to local people. Several studies suggest that coffee plantation could offer job opportunities and help farmers to earn more income, particularly farmers who planted organic coffee and could get access to markets (JICA, 2012; Phommavong, Ounmany & Hathalong, 2015; Seneduangdeth et al., 2018; Toro, 2012). However, its contribution in GDP decreased from 0.86% in 2011 to 0.45% and 0.48% in 2020 and 2021, respectively (ASEAN Stats, 2022; World Bank, 2022). A decline in value added to GDP is a result from energy and mining sectors’ contribution, coffee prices’ variation, and foreign exchange’s fluctuation.

Lao coffee sector faces many challenges from both external and internal threats. With respect to external threats, despite the drop of coffee prices and fluctuations of foreign exchange, climate change is playing a crucial role in threatening coffee production. With respect to internal threats, crop boom is threatening coffee plantation due to higher prices. Coffee production also struggles to meet international standard for exports due to a lack of capital, limited credit access, and limited production technique. Despite all these, smallholder farmers have weak bargaining power to negotiate with buyers and prices are suppressed by middlemen and large coffee producers (Enterprise & Development Consultants, 2016; Lao Coffee Association, 2014; Southichack, 2009; Toro, 2012; World Bank & Global Development Solutions, 2005). As a result, coffee farmers probably choose other crops that offer higher income.

In this respect, this research study aims to investigate the adaptation of farmers in order to mitigate these threats. This paper examines a degree of Lao coffee producers’ adaptation and mitigation by reviewing secondary data on global coffee market, Lao coffee market, and climate change data. In addition, primary data were collected in Khoun district, Xieng Khouang province in October 2019, Paksong district, Champasak province in January 2020, and Champasak, Sekong and Attapeu provinces in July-September 2022 from relevant coffee producers, entrepreneurs, and local authorities to reveal implications for deepening opportunities and challenges in coffee production (Appendix 1).

Over the past three decades, Laos’ coffee production increased almost two folds from 6 million tons in crop year 1990/91 to 10 million tons in 2019/20. Whereas, the trend of coffee exports shared a similar pattern, increased from 4 million tons in 1990/91 to 8 million tons in 2019/20 (ICO, 2022). Since 2010, according to the International Coffee Organization (ICO), the top three coffee exporter countries were Brazil, Vietnam, and Colombia, respectively, which accounted for approximately 60% of total exports. On the other hand, the major coffee importer countries were the United States of America, Germany, and Italy, respectively, which accounted for almost 50% of global demands. This implied that there is still a demand for coffee even it faced a small drop during the Global Coffee Crisis in 2000-2004 and the Global Financial Crisis in 2008-2009 (Figures 1 and 2). 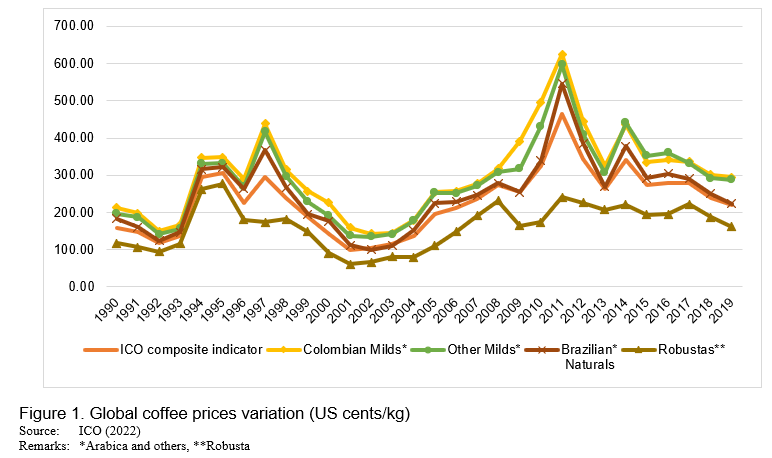 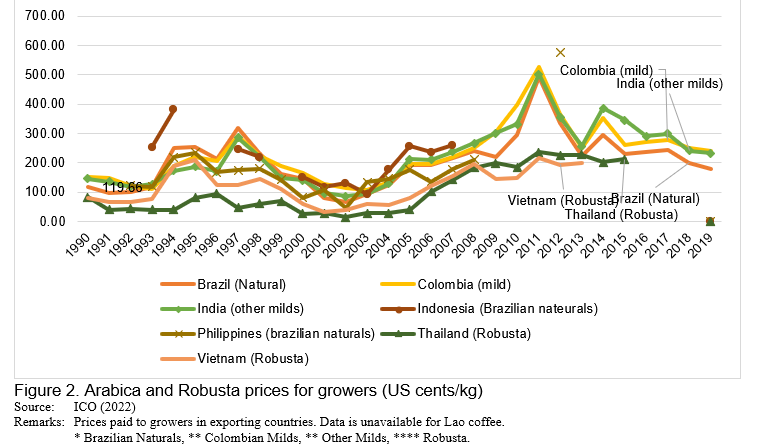 In 2021, coffee production areas in Laos covered around 83,320 hectares, which is the fourth crop after rice paddy, maize, and vegetable plantation areas (LSB, 2022).

Previously, 99% of coffee plantation areas varied in the Bolaven Plateau, which is known for its volcanic fields in the southern part of Laos. The most well-known coffee production group in the south is Bolaven Plateau Coffee Producers Cooperative (CPC) that received international assistance from the French investors since its establishment. There are 1,855 farm households as its members from 55 villages in 3 districts of 3 provinces (Champasak, Salavan, and Sekong). Besides this, a new comer Jhai Coffee Farmers Cooperative actively operates its production in Paksong of Champasak province.

Eighty percent (80%) of coffee plantations in Laos is planted to Arabica coffee, which offers higher prices compared to other variety, Robusta. But Arabica is more sensitive to high temperature and pests, causing higher production costs. In order to solve this problem, growers have tried to plant other coffee varieties. As a result, Catimor variety (a mixture between Arabica and Robusta varieties) was introduced to the Lao coffee farmers since the late 2010s. Now that Laos is experiencing the effects of climate change and farmers are slowly into planting diversification, coffee plantations are expanding to the country’s northern provinces. There are Phongsaly, Oudomxay, Luang Prabang, Houaphanh, and Xiengkhouang, which are increasing more shares in coffee plantation area, as shown in Table 1. A well-known coffee production group in the north is Keoset Community Coffee, which is being operated by a pool of farmers from 5 villages in Khoun district of Xiengkhouang province. 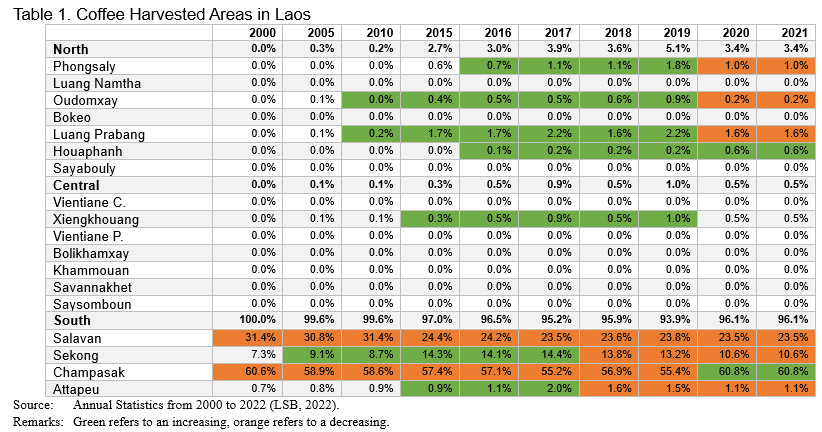 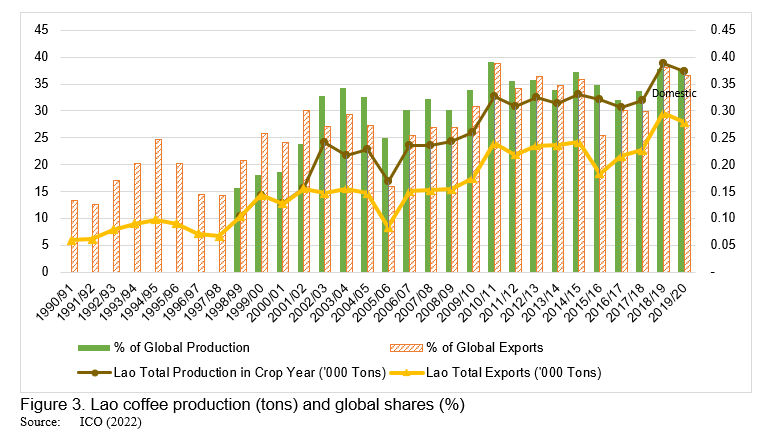 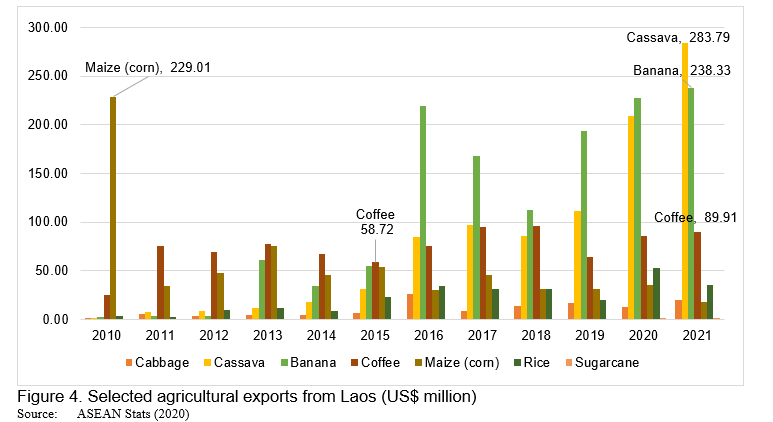 Figure 3 displays the production of Lao coffee in tons and its global shares. In 2021, coffee beans are one of the major agricultural exports of Laos which mostly goes to Vietnam, Thailand, EU-27, Japan, and Cambodia. It accounted for approximately 90% of Lao coffee exports, but the proportion was still low compared with global trade. The remaining coffee export is roasted coffee that is being supplied to the Cambodian, Chinese, and Thai markets (ASEAN Stats, 2022). Although, coffee plantation areas ranked fourth place in agricultural production, there were only 30,000 tons of coffee that have been harvested in 2021 and the production would fall in 2022. This is mainly due to many difficulties, such as the effects of climate change and cassava plantation intervention, as shown in Figure 4.

Climate change is a real threat in coffee production around the world. According to the NASA and various known research centers, each year global temperature is getting higher, and the arctic glacier continues to melt, which causes the rising of sea level. There have been many extreme disaster events that are affecting livelihoods such as typhoons, hurricanes, earthquakes, heatwaves, landslides, floods, drought, etc. According to the data from the Meteorology and Hydrology Office (Provincial Department of Natural Resource and Environment in Xieng Khouang and Champasak), the temperature has increased and rainfall patterns have changed, all of which directly affected coffee quantity and quality. Coffee plantations are affected by these changes, particularly farmers who depend on natural sources of water.

Based on author’s observation and findings from the Focus Group Discussions (FGDs) and the Key Informant Interviews (KIIs) (Appendix 1), Lao coffee producers may be classified into three tiers, namely Tier 1 (smallholder producers), Tier 2 (medium producers), and Tier 3 (large producers), as shown in Figure 5. 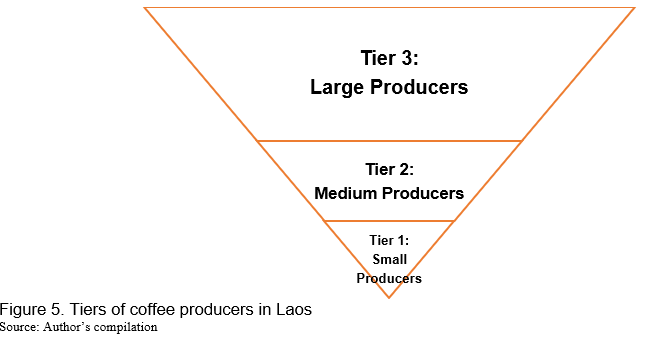 Although, there are efforts to improve the quality and quantity of coffee production, they are insufficient to support the coffee sector. Several challenges remain the same for more than a decade. According to FGDs and KIIs, coffee production in Laos is threatened by cash crop intervention, market orientation, labor insufficiency, and climate change.

Coffee plantation has contributed to economic development of Laos over the past three decades. It offers an opportunity to improve local livelihoods by creating more jobs and income. At the macro level, coffee is one of the most famous agricultural exports of Laos, particularly the produce from Bolaven Plateau, which is located in the southern part of the country. The widespread expansion of coffee plantation has gradually emerged in mountainous areas of the north as well. Currently, Lao coffee production is facing many challenges both from external and internal threats. With respect to external factors, climate change is threatening coffee production. With respect to internal factors, cassava boom intervenes with coffee plantation and causes soil deterioration. It is suggested that the government should determine zoning to strengthen coffee plantation and restrict crop boom that causes vulnerable soil. The government aspires to determine zoning based on geography, areas, and market access potential in order to enhance agricultural production for exports. There are four types of plantation areas, such as rice paddy, biennial plant area, fruit tree plantation area, and pasture. In addition, raising climate change awareness is an essential to help local producers adapt and improve their production. Lao coffee sector development should be paralleled with other potential crops that offer more gains and less effect, particularly soil deterioration.

Despite cassava intervention, market limitation, labor shortage, and climate change, smallholder farmers also have weak bargaining in contract farming enforcement, leading to suppression of prices. Coffee farmer/production group should be improved to support local growers in terms of production techniques, training, credits, and markets. The government should progressively deepen its support and assistance to enhance farmers’ production groups, improve business environment, and facilitate procedures for coffee produce and exports. More importantly, the government should maintain and broaden its coffee market locally and internationally. This should be in parallel with the development of other potential agricultural produce that contribute to improve local livelihoods and economy.

Exploring the Potentials of Coffee Industry in Malaysia

Vietnam Coffee Export: Improvement in Both Quantity and Quality

Learn more
END_OF_DOCUMENT_TOKEN_TO_BE_REPLACED
You are using an outdated browser
For a better experience using this site, please upgrade to a modern web browser.