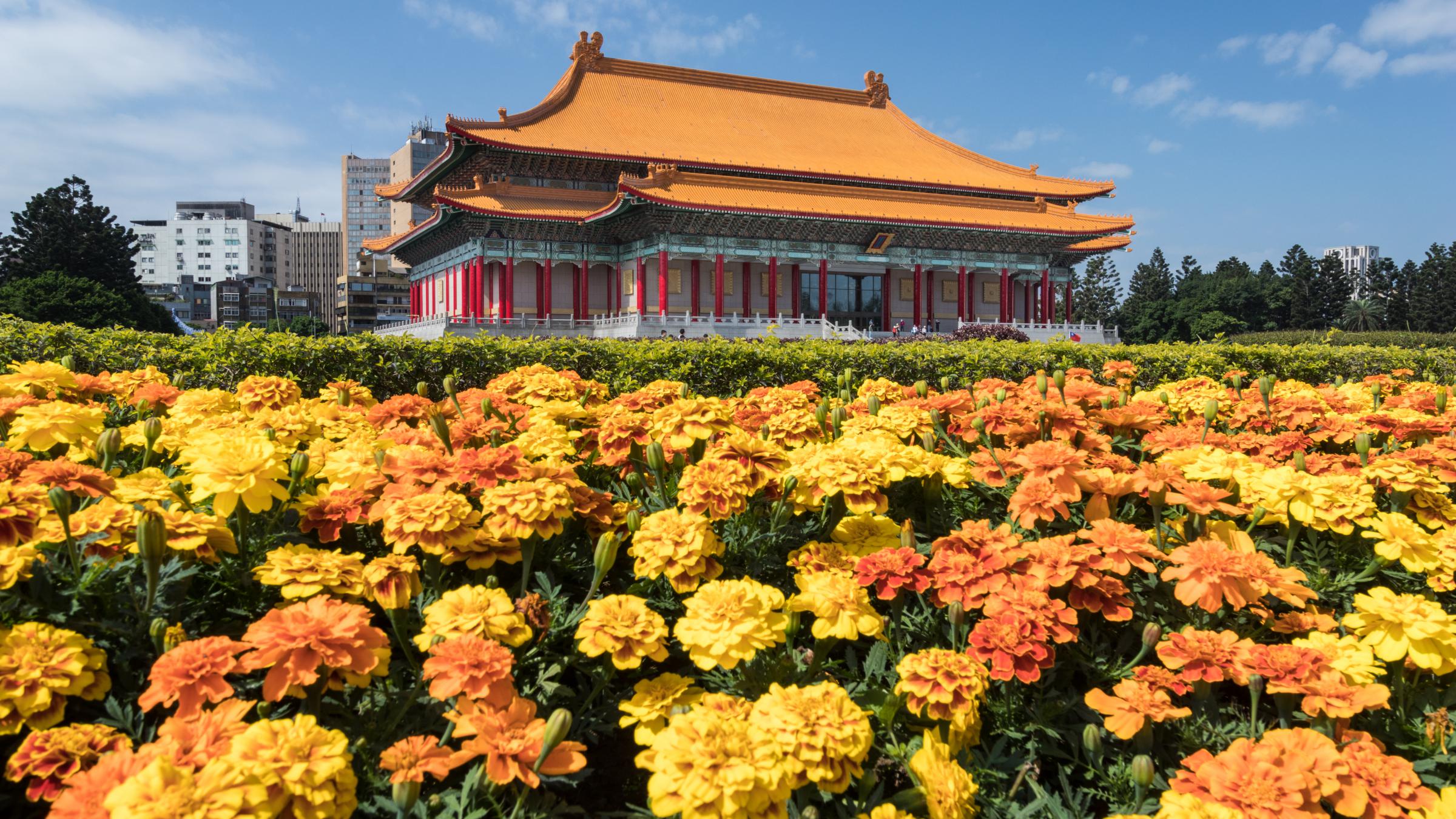 Brown is the New Green: A Demo Base for Bio-Circular Economy by Advanced Biogas Production System in Taiwan

Taiwan has more than 7,400 hog farms and 5.5 million pigs. The annual output value is about US$2.3 billion, accounting for 43% of the livestock industry. It is one of the most important agricultural economic sectors in Taiwan. However, due to the large number of herds, a large amount of pig manure and urine are continuously discharged from the livestock farms. If they are not treated very well, it will seriously affect the environment and ecology. Pig manure and urine wastewater contains a large amount of degradable solids, which is a high concentration organic wastewater. This high concentration organic wastewater undergoes an anaerobic fermentation process, and biogas will be generated during the treatment process. Biogas is a combustible gas. The main component is methane, which accounts for 50 to 65% of the volume of biogas. It can be burned to generate heat or even generate electricity. Biogas power generation has the benefits of reducing greenhouse gas emissions, saving energy expenditure, and improving the quality of discharged water to promote the sustainable operation of the livestock environment. It has been used in overseas pig farming for many years and is the best application of circular economy and biomass energy.

The biohydrogen research team of Feng Chia University has developed HyMeTek technology since 1998 in batch flasks in the laboratory, and it was then developed into continuous flow to produce hydrogen (Lee et al. 2004; 2006). Finally, the team had screened an immobilized and optimized biological hydrogen production bacteria in the laboratory, which has achieved the world's fastest biological hydrogen production rate (15 m3/L/hr) and had been published in an academic paper on International Journal of Hydrogen Energy in 2006 (Lin et al. 2006). So far, no international R&D team has exceeded this record. However, the high hydrogen production rate does not mean that the technology can be commercialized. Therefore, Feng Chia University biohydrogen research team began to develop commercial technology in 2006, from the support of the Energy Bureau’s projects, combined with the support of the Ministry of Science and Technology, the Ministry of Education and the outstanding projects of Feng Chia University. On the campus of Feng Chia University, the world’s first pilot plant for biohydrogen production was then built on year 2006 (Figure 1) (Lin et al. 2009). The plant has also undergone three evolutions with the addition of methane production tanks, biohydrogen refueling stations and other equipments. Feng Chia University has also developed a “mobile biogas synergy power pilot plant" which has also been verified on-site at a brewery and food factory in central Taiwan. (Figure 2) 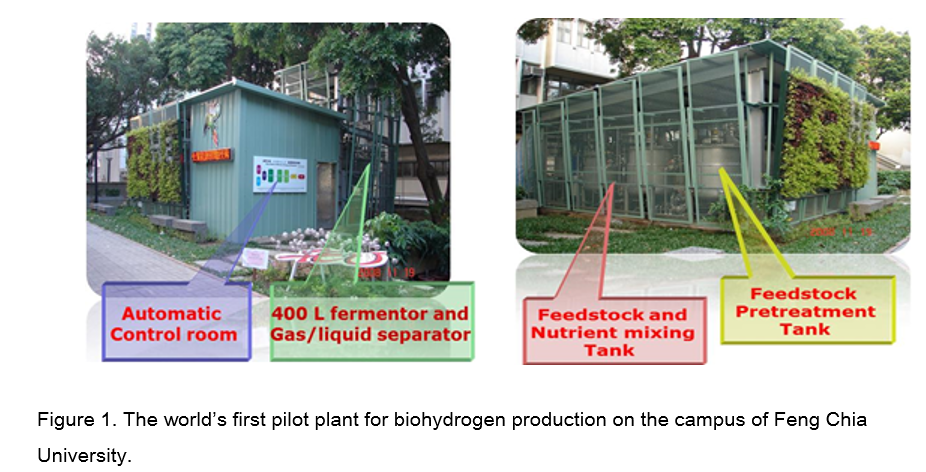 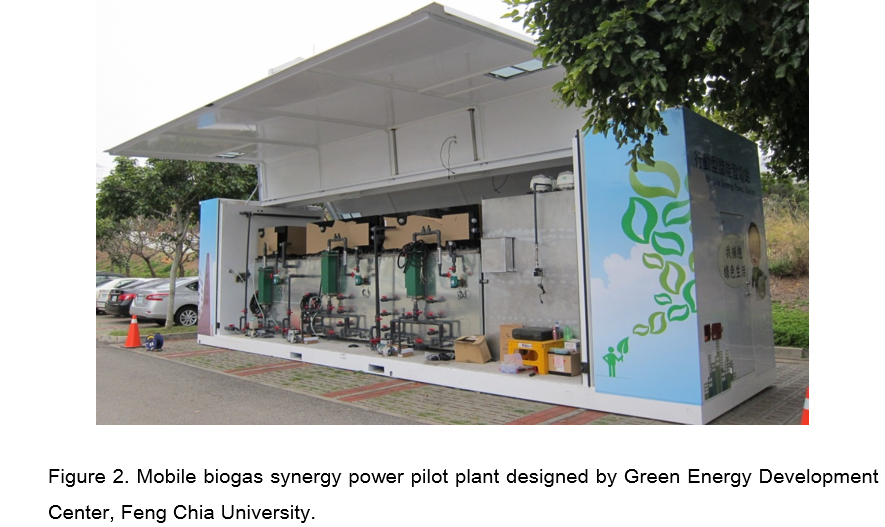 However, the traditional three-stage wastewater treatment system has poor gas output efficiency. Under the condition that the input and output are not in line with economic benefits, farmers have little profit and low investment input willingness. But recently, biogas power generation has finally got a new outlook by an advanced biogas production system so called “HyMeTek”.

"In the past, we looked at pig manure and urine from the perspective of waste, but now it is regarded as a source of biomass under the concept of circular economy." Lin Yang-Shan, deputy general manager of Nice Garden Industry, pointed out that manure which has been effectively returned to farmlands not only contributes to the reduction of global warming effect and wastewater treatment. It also provides nutrients for crops as organic fertilizers and can reduce chemical fertilizer expenditures. After biogas is used to generate electricity, it can be used for piggery room insulation equipment. After wastewater treatment, the recycled water has reached the discharge standard and can be used to clean the piggery. It is fully in line with the definition of circular economy!

Because of the development of the pork brand of "Choice Pig", Nice Garden company purchased the 30-year-old "Xin He Xing" Ranch in Nantou county eight years ago as a demonstration field, as well as for educational training and development of products. After the purchase, it was found that the wastewater treatment system was too old, and the generated odor often troubled nearby neighbors. In order to protect the environment and enhance the brand image, Green Garden company decided to invest the new wastewater treatment system and biogas power generation equipment in the end of 2017.

However, “Xin He Xing” ranch raises only about 2,000 pigs, and it is not economical to invest in biogas for power generation. Fortunately, Green Energy Development Center and Institute of Green Products of Feng Chia University has won four patents on "Two-stage High-efficiency Anaerobic Fermentation Technology, HyMeTek." Compared with the traditional wastewater treatment system, each pig can produce about 0.1 cubic meters of biogas per day. This new-generation biogas power generation technology can increase the amount of biogas by 30%-40%, and has good power generation efficiency, which is very suitable for domestic small pig farms.

In the traditional three-stage wastewater treatment system, after collecting pig manure and urine, solid-liquid separation is performed to separate solid manure from liquid manure. The solid is used for composting and is also used to fertilize the field; the liquid is subjected to anaerobic fermentation to produce biogas. To generate electricity, however, the amount of biogas produced cannot always be increased. After research by Feng Chia University, it was found that the solid part is rich in organic matter, which can provide anaerobic bacteria fermentation conditions. Therefore, the process is changed to keep the solid matter in the mixed wastewater, the first stage is to fully stir the pig manure and urine, and the second stage is the HyMeTek fermentation produces for hydrogen and methane productions. Mixing the hydrogen and methane gases can greatly increase the combustion efficiency, which can be 25% higher than the general biogas power generation combustion efficiency, and there is almost no odor in the process.

With the patent research and development of Feng Chia University, what the receiver also needs is the equipment supplier. Mr. James Tung, CEO of Asia Hydrogen Energy company, has long been devoted to professional equipment for swine wastewater biogas power generator, and has been cooperating with Professor Andrew Chu, Director of Institute of Green Products, Feng Chia University. The new technology solution for wastewater system of “Xin He Xing” ranch was often discussed in Feng Chia University until 12 o'clock in the evening. It is the first of a two-stage high-efficiency anaerobic fermentation technology in Taiwan to realize the advanced biogas technology. This project also needs a professional domestic construction company for integration of several equipment units. Recommended by Feng Chia University and awarded the "Taichung City Low-Carbon City Outstanding Contribution Award", REIJU Construction company was then selected and confirmed to join this pioneer project.

Nearly 80% of pig farms are operated on a small-scale mode in Taiwan. Generally, small farmers cannot invest large amounts of money to support the advanced biogas power generation and wastewater treatment system. Therefore, the entire team of this project invests regardless of the cost, and hopes to use this case to establish a reference model. The purpose of this project is to demonstrate the affordable clean energy to the small farmers so they can see the benefits and have the ability to invest, so that the circular economy can be truly implemented.

Since this case is Feng Chia University’s first on-site implementation system in Taiwan, the construction process must continue to be fine-tuned according to the on-site conditions, and the drawing engineering design has been revised from the first draft to the 12th edition before it is finally completed. The hard work is not limited to this, because the original wastewater treatment tank is used for reconstruction, but the industry of raising pigs cannot be interrupted. If there is no waste water treatment tank, the Environmental Protection Agency, Taiwan can request a deadline for improvement or even order to stop work. The temporary storage tank is used to collect the continuously generated wastewater. On the one hand, civil works are completed, and part of it is replaced with another area. It took more than a year to complete the civil works and held the ceremony on December 25, 2018. The equipment manufacturer Asia Hydrogen Energy company introduced the double layers’ biogas holder, and required foreign engineering technicians to install on March 2 and 3, 2019. The generator part also required Japanese engineers to carry out on August 6, 2019 for adjustment and technical transfer. After the construction of the entire hardware equipment, Professor Andrew Chu and Mr. James Tung invited Professor Ray Zhang to jointly develop an artificial intelligence (AI) control system that optimizes the biogas power generation system (computer remote digital control system), which can remotely monitor and operate various parameters of wastewater treatment, and make the most immediate adjustments according to the actual situation. The control system design was finished and successfully tested at the end of August 2019 (Figure 3). 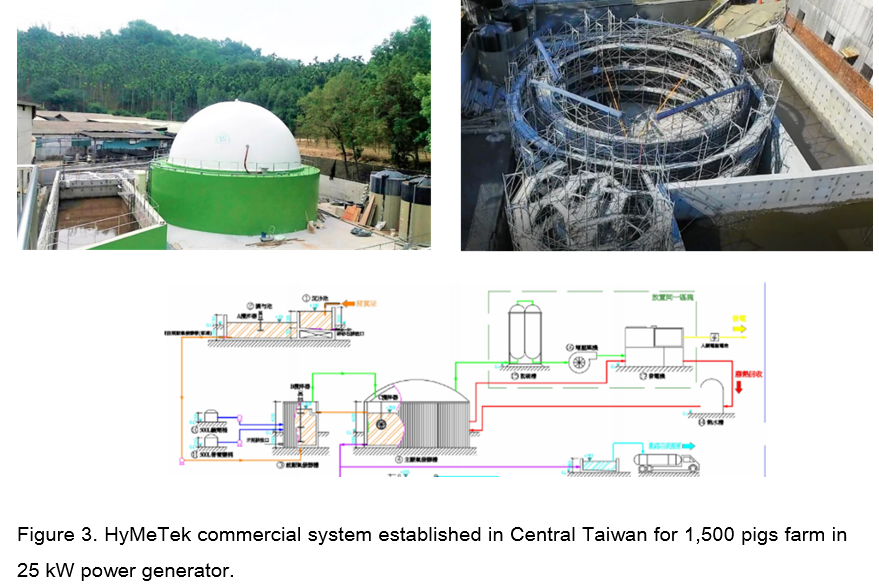 BENEFITS IMPACT TO THE SMALL FARMERS

The use of organic wastewater or agricultural and animal husbandry wastewater to generate electricity is not a new technology, but Feng Chia University has made technological breakthroughs and developed the "anaerobic two-stage biohythane gas production technology, HyMeTek", the anaerobic two-stage refers to the production of methane after hydrogen production. This two-stage biohythane gas production system not only has higher energy recovery efficiency, but also can make the better combustion efficiency of the internal combustion engine in the generator. But any technology must go out of the laboratory to really bring help to the industry and people's livelihood. The Feng Chia University team with the technology met the Xin He Xing Ranch in Nantou County with the intention to improve the environmental pollution of the pig industry. The two parties hit it off together and jointly built the world’s first pig farm biohythane power station. The system officially operated at the beginning of year 2020. The odor problem of the wastewater was solved, and the farm could receive about US$30,000 in electricity sales every year. For the initial investment cost on the rebuild of the wastewater treatment system from conventional one to HyMeTek was about US$500,000 for treating the wastewater to discharge level of the requirement from Government. However, the capital cost for the bioelectricity generation system was around US$100,000. It implies that the payback period is 3.3 years for the extra of bioelectricity generation system.

Since this is the first large-scale swine wastewater in Taiwan by using two-stage anaerobic fermentation technology, coupled with a computer remote digital control system, there are still several problems during the commissioning phase, and this strong team has tried to overcome and improve it in order to optimize the process and continue to move towards the goal of reducing costs. The project team's goal is to build a successful demonstration model, and drive the domestic industry to invest together, so that the circular economy is no longer a distant dream, but a regenerative value that can be concretely practiced. At present, the technology of Feng Chia University has been actually verified in Xin He Xing Ranch in Nantou, with a designed power generation capacity of 25 kW. It is estimated that about 30 thousand USD can be recovered annually. The "two-stage high-efficiency biogas production technology HyMeTek" developed by Feng Chia University can not only treat wastewater with high organic pollution, but also generate bioenergy and sell electricity to the government to generate economic value. It can also enhance the green image of the industry in the future. Selling "carbon credits" that reduce the accumulation of carbon dioxide is arguably the most compact biomass energy technology in the future. Under the current government's 5+2 focus industry, and the policy of encouraging large pig farms to bring small pig farms, the development of this advanced biogas production industry and the promotion of renewable energy share can be expected.

Biochar: Its Role and Perspectives in Agriculture and Forestry Circular Economy in Taiwan

Learn more
END_OF_DOCUMENT_TOKEN_TO_BE_REPLACED
You are using an outdated browser
For a better experience using this site, please upgrade to a modern web browser.