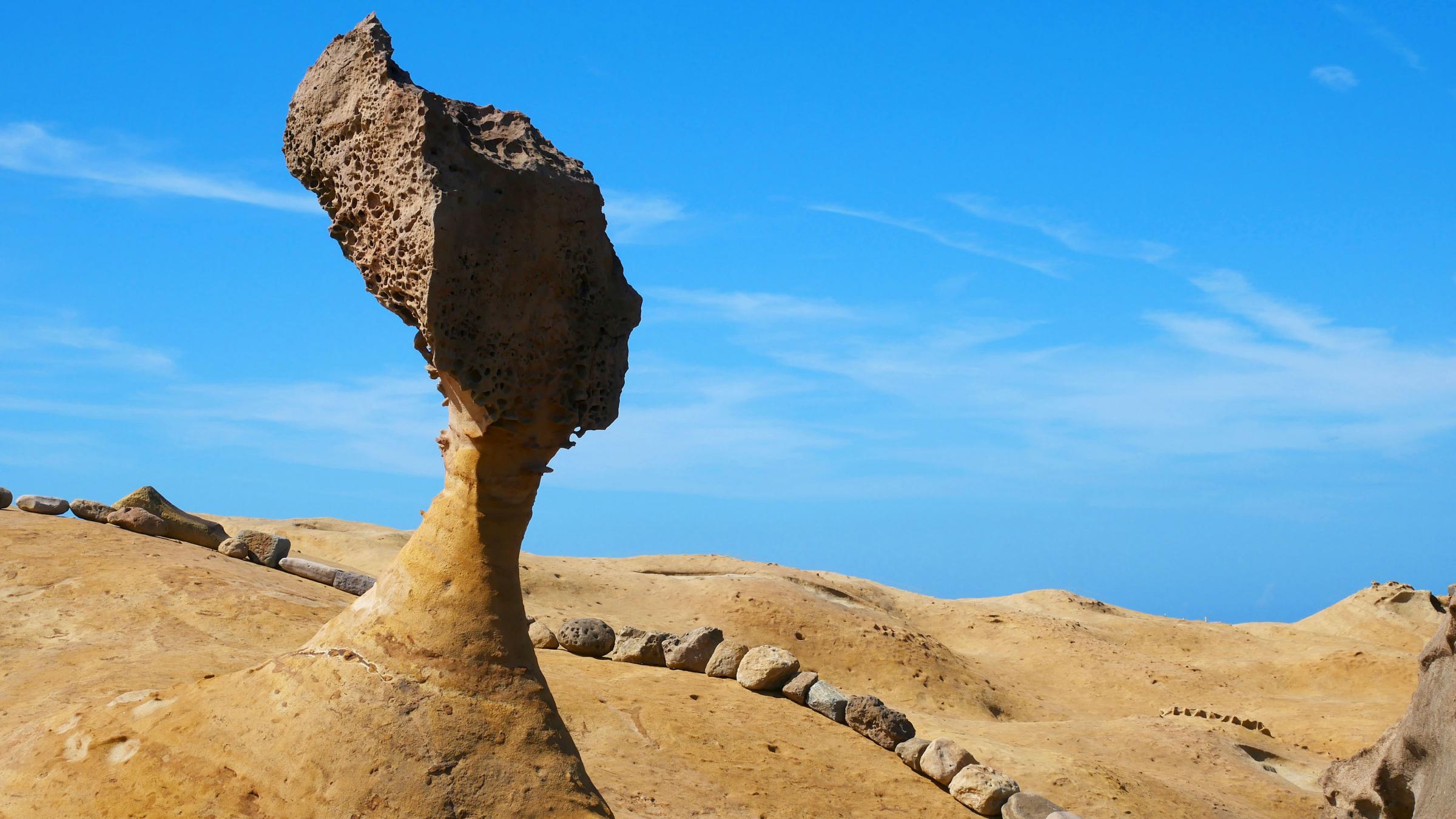 Taiwan’s government announced its energy development plan in 2017 and decided to promote no nuclear power policy by the year 2025. Before further discussion on the renewable energy promotion, it is better to understand the current electricity generation structure. This study presented updated electricity demand and supply report  and committed renewable energy development target that will be achieved by increasing installed capacity of 20 gigawatts per hour of solar energy and 3 gigawatts of offshore wind power. The other 4 gigawatts will be shared by geothermal, biogas and micro-hydroelectricity generation facilities. In order to promote the usage of bioenergy, the Bureau of Energy still focuses on biogas generated from the usage of manures from pig farms. Those new anaerobic digestion systems with total installation capacity between 30 kilowatts per hour and 500 kilowatts per hour built on sewage, general waste and industrial waste treatment sites can apply NTD1 million (US$ 30,000) subsidies from the Bureau of Energy during the 1 January 2018 to 31 December 2019. In order to achieve energy diversity and energy security, Taiwan needs to introduce diverse renewable resources and increase the energy independent from the imported energies. The renewable energy development plan designed by the new energy policy only focuses on solar, offshore wind, biogas and biomass, it is not really diverse enough and might not be able to meet the development commitment by 2025.

Taiwan is an island with a population of 23 million and has abundant natural resources except for fossil fuels. This is a national security concern since more than 99% of Taiwan’s energy is imported and the energy alternative is limited. In order to create diverse energy resources and delivery system, it is necessary to increase the country’s local energy resource supply and alternatives. The renewable energy resources, including solar, wind, biomass and geothermal, become the indigenous power resources to reduce dependence on imported energies.

Taiwan’s government announced its energy development plan in 2017 and decided to promote no nuclear power policy by the year 2025. They will also promote and use the renewable energy to generate electricity to 20% of total electricity generation by 2025. The no nuclear policy means the government shall require the State-owned Taiwan Power Company (the Taipower) to close the current three operating nuclear power plants permanently and they must be decommissioned when they reach retirement stage in the coming years. The 4th nuclear power plant also has been mothballed since 2014 because of the protests from the environmental groups regarding potential radiation concerns.  The Legislative Yuan (the Congress) also reached a resolution and required the Taipower to keep removing all the fuel rods from the nuclear power plant until the end of 2020. (Legislative Yuan, 2020) 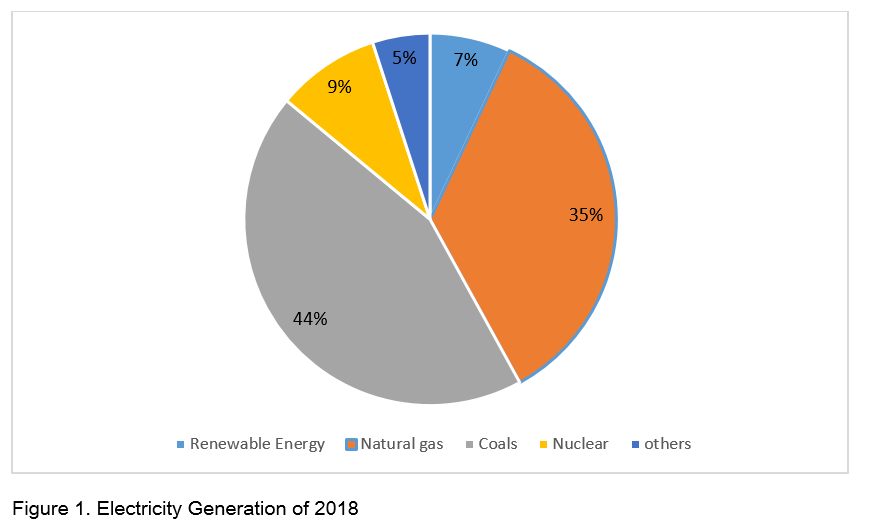 ANALYSIS ON THE NEW ENERGY POLICIES

Based on the new plan, the promotion and usage of renewable energy based electricity will be increased from the current 5% of total generation to 20% by 2025. It is obviously a great challenge because the target is quite ambitious and the achieving year are short. The policy also planned to limit the usage of nuclear power, which is currently used as base load power, until 1% or 2 % by 2020. This limitation on nuclear power policy gave even more pressure on the government because they need to find extra energy resources to replace nuclear power as base load energy but not increase air pollutants, especially since the Greenhouse Gas Reduction and Management Act was passed in 2015 designing to regulate domestic greenhouse gas emissions. The government is facing dual challenges to meet the renewable energy development target and also the demands of the base load power without nuclear energy supply.

The institutional arrangements to promote renewable energy were assigned by various domestic regulations. Based on the “Electricity Act” and “Energy Administrative Act,” the Ministry of Economic Affairs (MOEA) is the competent authority to ensure the stable and safe energy supply and to analyze, design and implement electricity supplier policies. It is also the competent authority assigned by the “Renewable Energy Development Act” (REDA) to promote and encourage energy diversification and usage. Then, the MOEA further assigned the Bureau of Energy to deal with the energy related affairs.

The biomass is one types of the renewable energy identified by the REDA. However, some resources of biomass include the usage of domestic general wastes and industrial wastes and their assigned competent authority is not the MOEA but the Environment Protection Administration (EPA) and the Council of Agriculture (COA) in Executive Yuan. These agencies owns their profession and governing matters, whether these agencies could establish better horizontal collaboration and promote usage of biomass are potential concerns. On the other hand, these related technologies and industry standards on using agriculture residues or industrial waste materials are controlled by the Industrial Development Bureau of the MOEA.

The MOEA published its updated electricity demand and supply report in 2018 and mentioned its committed renewable energy development target has achieved by using 2.7 billion kWh of solar energy and 1.7 billion kWh of wind power. The other 3.9 billion kWh were shared by geothermal, biogas and micro-hydroelectricity generation facilities (Bureau of Energy, 2018). These five renewable-based electricity will be major resources to generate 20% of total electricity by 2025. The MOEA also started the Feed-in-Tariff (FIT) mechanism to promote renewable energy development from 2009. The new energy policy follows the FIT mechanism and adopted electricity generated from biogas with anaerobic digestion system in 2017 (Taiwan Today, 2020).The fixed purchase price was increased from NTD 3.9211(USD 0.13) kilowatts per hour (kWh) to NTD5.0087 (USD 0.16) kWh (Wu, 2017). Although the Article 2 of the REDA identified the bioenergy, domestic general wastes and industrial wastes are all belong to the scope of renewable energy, the MOEA only chooses the biogas as the most prior developing bioenergy resource because the pig farms in Taiwan raise more than 5.5 million pigs a year and only use manures from 2.5 million pigs which can produce electricity of 91.25 billion kWh by 2020 (Department of Animal Industry, 2016). Collecting manures from pig farms can protect the environment and water quality in the counties of Taiwan and also provide more “green electricity” to comply with the development commitment in 2025.

The other bioenergy resources not included by this new energy development plan are treated as promotion programs in different bureaus and government institutions under the requirement from REDA. The Bureau of Energy designed and implemented the “Affiliated Projects for New and Renewable Energy Development Promotion” in 2018. The scope of bioenergy was expanded to biomass, including multifuel gasifier with thermoelectric system, biomass pyrolysis technology, waste gasification technology and wood pallets. The current bioenergy installations contribute 350 M kWh of electricity in 2017, including 20 M kWh from biomass and 330 MW from waste gasification, and represents 0% of the total electricity production. The Bureau of Energy estimates the electricity generated from these bioenergy installation facilities could reach 813 M kWh by 2025. Comparing with the current electricity contribution, the increasing rate could reach almost 43%. Based on this number, we could realize the electricity from the current bioenergy installations are not connected to the grid but majorly uses its own installation or facilities.

In order to promote the use of bioenergy, the Bureau of Energy still focuses on biogas generated from the use of manures from pig farms. Those new anaerobic digestion system with total installation capacity between 30 kW to 500 kW are built on sewage, general wastes and industrial waste treatment sites that can apply NTD 1 million (USD30,000) subsidies from the Bureau of Energy during the 1 January 2018 to 31 December 2019. (MOEA, 2018). The Council of Agriculture also provides financial awards (minimum NTD 1.7 million - maximum NTD 6 million) to those pig farm owners who would like to collect pig manures and install anaerobic digestion system to generate electricity with fixed contract price with Taipower. The EPA also collaborates this biomass promotion project and design to establish another three regional kitchen waste biomass energy center with a total capacity of handling 180,000 tons of food wastes a year. At the same time, the Industry Development Bureau of MOEA also encourages and promotes resources and energy integration among industries. They also promote biomass energy technology by thermal treatment, especially the co-firing of solid wastes of incineration technology. They are also trying to produce standards and regulations for the wood pallets made from agriculture and forest wastes. So far, we only can observe that the government engages its efforts on usage promotion of biomass and biogas development. The other bioenergy resources such as biodiesel, biofuel, refuse derived fuel and bioethanol are not mentioned in these new energy policies.

In order to achieve energy diversity and energy security, Taiwan needs to introduce diverse renewable resources, including biomass, and increase the energy independent from the imported energies. The renewable energy development plan designed by the new energy policy only focuses on solar, offshore wind, biogas and biomass. It is not really diverse enough and might not be able to share the developing commitment by 2025. Although the government might plan to focus on some specific bioenergy with cost and effectiveness concerns but not to develop all bioenergy resources at the same time, the successful example could demonstrate their experiences for the later efforts on bioenergy promotion. However, the government shall have confidence to promote more diverse bioenergy and could provide more economic incentives for the industries to engage its innovative bioenergy technology research, especially since Taiwan owns advanced agricultural technologies and has abundant agricultural and forest wastes.

The Greenhouse Gas Reduction and Management Act has been passed in 2015 and has established its national greenhouse gases reduction target to 50% of 2005 level by the year of 2050. The new energy development plan did not mention its promotion efforts could share how many reductions by using renewable energy to replace traditional fossil fuels. The baseline year of renewable energy promotion commitment is 2020 and it does not show any linkage with the legitimate greenhouse gas reduction target. In order to comply with the reduction obligation described in the Greenhouse Gas Reduction and Management Act, the MOEA and the EPA shall have more collaborations and discussions on their plans for energy security management, renewable energy promotion and greenhouse gas reduction. At least, the government shall

The Council of Agriculture (COA) is the competent authority of the Forest Act and other agriculture waste disposal management regulations. The forests in Taiwan are prohibited to log for almost three decades, the driftwoods caused by the typhoon and collected by the COA are also prohibited to be used as energy resources. These are the limitations to prevent agriculture and forest wastes from transferring into energy resources. As usual, these regulations do not have any linkages with the renewable energy promotion policy and the MOEA which did not pay that much attention to create dialogue with the COA on the agriculture disposal transformation. The COA shall review the safety standards on pesticides on agricultural wastes and allow them to be used as renewable energy resources. They shall work with the MOEA and the Bureau of Energy to establish safety standards on agricultural wastes and allow them to be used as bioenergy resources. The Bureau of Industry shall also assist the EPA to establish emission standards and waste treatment standards for those co-firing solid waste by thermal treatment.

These new energy development policies are proposed by the MOEA and the Executive Yuan, and were designed from the economic perspective. However, they did not go through the environment impact assessment process.  The government shall proceed and review their energy policies and produce its policy environmental impact assessment. The environmental regulations shall have close collaboration with the renewable energy development especially using the waste disposal materials. If the current regulation could not support the renewable energy development and promotion, it might be a good timing for the government to adopt new concept of circular economy and make the new regulations to support development of renewable energy. It could help Taiwan to use more diverse energy resources and reach energy independence from imported energy. 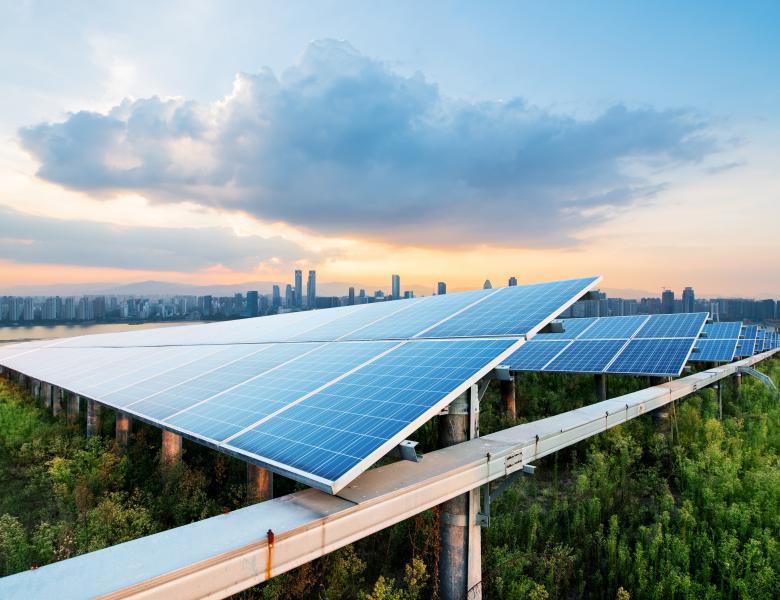 Learn more
END_OF_DOCUMENT_TOKEN_TO_BE_REPLACED
You are using an outdated browser
For a better experience using this site, please upgrade to a modern web browser.